Drug companies and investors should be pleased by the latest report commissioned by the Food and Drug Administration -- and it explains why biotech has been so hot during the last few years. The Prescription Drug User Fee Act, or PDUFA, which has been renewed by Congress four times, requires drug companies to pay fees to have their marketing applications reviewed.

The companies don't mind because the law requires the FDA to use the money to hire more staffers to review the applications, and it also sets timetables for the drugs to be reviewed. The PDUFA date is a goal rather than an absolute deadline, so the agency commissioned a report by Eastern Research Group to see how well it's doing meeting its goals.

Bottom line: The agency is meeting its goal. During the first two years of PDUFA V, the fifth iteration of the act, the agency missed just one PDUFA goal date out of 64 applications, handily beating the PDUFA goal of acting on 90% of applications before their PDUFA date.

Even better, a large number of companies received decisions well ahead of their PDUFA dates. A solid 22% of drugs undergoing priority review got a decision more than a month early compared to just 13% of priority drug applicants under the older PDUFA IV. Standard applicants also saw an improvement in decisions at least a month early, jumping from 4% under PDUFA IV to 16% in the first two years of PDUFA V.

The results are somewhat misleading, though, because PDUFA V extended the amount of time the FDA has to review the application by two months. Not surprisingly, the median review time increased by two months for a standard review -- from 10 months to 12 months -- and by 1.9 months for a priority review. If you look at the average time, rather than the median, the difference is less than two months, owing to the aforementioned early decisions some companies received.

In addition to confirming that the agency is meeting its goal of acting on 90% of applications before their PDUFA date, the report compiled a boatload of additional statistics. The data was sliced and diced into 21 different tables and 17 figures, analyzing everything from how pre-submission meetings affected applications to the timing of inspections.

But here's the one that's most interesting and explains why investors are flocking to the sector.

A vast majority of applications, 71.9%, were approved during the last two years compared to just 54.8% of applications under the previous PDUFA iteration.

But if you look at the four individual years under PDUFA IV, you'll see that the FDA had already begun loosening its standards for approval. Only 40% of applications were approved on their first application in fiscal year 2008 compared to 72.9% in fiscal year 2012, slightly higher than the average of the first two years of PDUFA V. 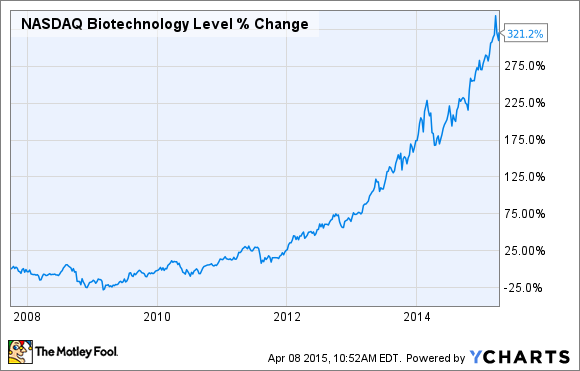 On the surface, it is less risky. If the clinical trial data is good, the likelihood of approval appears to be higher than it was in the past; so with less risk, investors can afford to buy at a higher value. Barring some post-approval side effect popping up -- something the magnitude of Vioxx or Fen-Phen -- it seems unlikely the FDA is going to tighten its standards anytime soon.

But investors should keep in mind that FDA approvals are only part of the story. Drugmakers have to generate good clinical trial data in the first place. Then, after gaining market approvals, companies have to get doctors to prescribe the drugs, and insurers to pay for them.

While the FDA may not tighten standards anytime soon, the risk premium for the sector can only go down further -- thus increasing valuations -- if the other aspects of drug development become less risky. Conversely, if they become more risky -- a hot technology turns out not to work, or insurers push back on pricing -- we could actually see the bubble pop even if the FDA remains Mr. Softy.

This Is the Reason for Biotech's Monster Run, and It Isn't Going Away Anytime Soon @themotleyfool #stocks Next Article
Current