What: Laredo Petroleum Inc. (NYSE:LPI) bucked an industry trend as its shares soared in March even while oil prices remained depressed. Investors bid the stock up after the company raised equity and debt capital, which it used to pay down higher-cost debt and boost liquidity. Despite the initial sell-off on the news that Laredo was selling nearly 70 million shares to start the month, the stock ended the month up 16.2%. 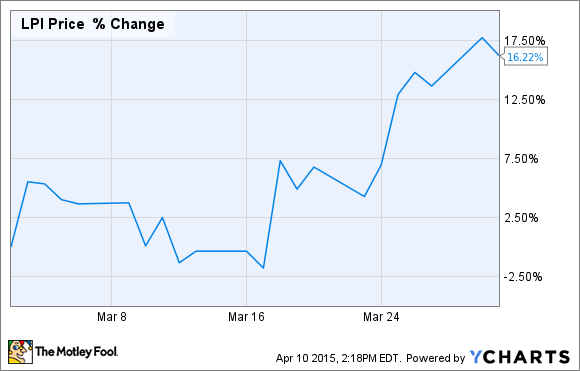 So what: Laredo Petroleum raised a lot of capital in March, which helped put to rest any liquidity worries. The company initially sought to sell 50 million shares at $11.05 per share, which was about where its stock was trading to start the month. However, it was able to upsize that offering to 60 million shares, along with an option for underwriters to buy another 9 million shares. By the time the deal closed the company had sold every single share, raising over $750 million in equity capital. Furthermore, the company issued $350 million in debt due in 2023 at an interest rate of 6.25%.

Management plans to use this capital to pay off all $550 million of senior notes due in 2019 that carried a 9.5% interest rate, as well as to pay off down the $435 million it had drawn on its credit facility. This will save Laredo Petroleum a lot on interest through a better rate and the overall reduction of its outstanding borrowings. The company also boosted overall liquidity from $465 million to $950 million.

Now what: By taking full advantage of this opportunity, Laredo Petroleum raised $1.1 billion in debt and equity. The company now has plenty of liquidity as it waits for the oil market to recover.