The transportation sector isn't necessarily the first one that comes to mind when thinking of dividends. Costs tend to be high, and competition is tough in most of its segments (e.g., airlines). This doesn't often leave a lot of money on the table for shareholders.

Yet there are at least a few companies in the sector that perform consistently well, and are happy to direct a good chunk of earnings into the pockets of their investors. Here's a look at three of them.

Textainer Group Holdings (NYSE:TGH)
Container shipping is one of the great revolutionary business innovations of the last century. As such, it'll likely always be a cornerstone of the global economy. This very much works in favor of this company, which makes its coin by renting containers to the shippers -- all told, it owns over 2 million of the things.

It's a straightforward, unfussy business model, and it works. Textainer Group has been consistently profitable over the years, with notably improving performance of late -- since 2010, its annual net profit has grown by nearly 60%, and revenue by over 85%. 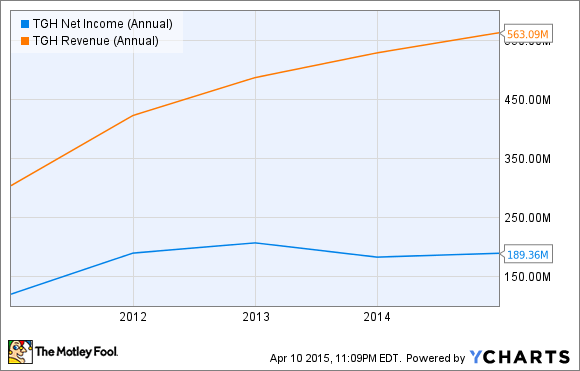 Given its stock in trade, Textainer's success is dependent on global growth. In spite of softness in various markets (lingering economic malaise in Europe, a relative slowdown in China), this is humming along and will likely continue to do so.

Meanwhile, Textainer pays a dividend generous to its stock price. At the current $0.47 per share, that payout yields over 6%.

FLY Leasing (NYSE:FLY)
Roughly speaking, this company is to commercial aircraft as Textainer is to shipping containers. FLY Leasing lives up to its name by renting planes to airliners wanting to fill out their fleets but unwilling to spend the big amounts required of ownership.

At the end of last year, the company had 127 aircraft available, which were leased to 64 entities located in 36 countries. It's a relatively young fleet, with an average age of less than eight years. The company is an interesting sideways play on the commercial air travel industry, which is doing well lately on the back of sharply lower prices for oil (collectively, its No. 1 expense).

That oil price decline widened airline budgets and helped make for a very good Q4 and fiscal 2014 for FLY Leasing -- revenue for the latter period advanced 15% to $427 million, and net profit grew by 7% to $56 million.

FLY Leasing likes to be generous with its dividend. The yield on the company's distribution has historically fluctuated between 5% and 8.5% or so; its quarterly payout of $0.25 per share currently yields 6.7%. 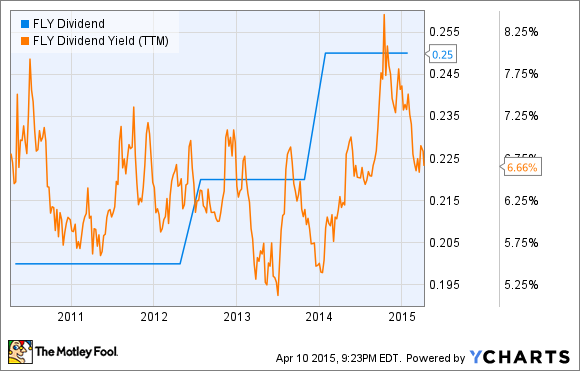 United Parcel Service (NYSE:UPS)
As with FLY Leasing, the timing might be right to buy shares of this sturdy logistics giant, although for rather different reasons.

UPS saw its share price take a hit earlier this year in the wake of its Q4 results. That quarter unfolds over the holiday season, which, because of volume, is critical for a company that ships stuff. The company is well aware of this, yet has still been caught short in the past two holiday quarters. Projects undertaken to cope with the most recent Santa season ended up being significantly more expensive than previously anticipated. Annual net profit came in a steep 31% lower on a year-over-year basis at $3.0 billion, despite a modest 5% improvement in revenue to $58 billion.

The resulting share price slump, in my opinion, has provided a good opportunity to buy UPS on the cheap. The company remains, aside from the post office, the player in American logistics. It also continues to steadily grow its revenue -- that $58 billion in 2014 was the latest in what's generally been a history of increases. 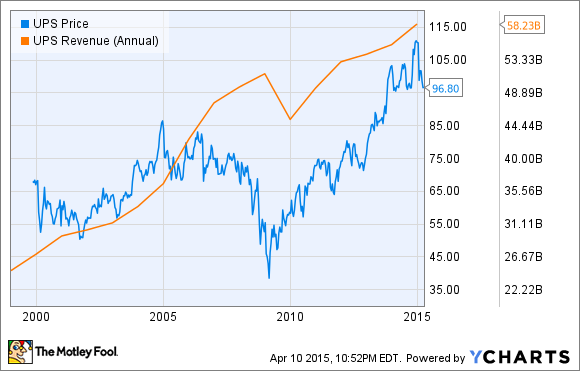 Since the company's stock is basically on sale these days, the yield on its $0.73 per share quarterly dividend is relatively high, at just over 3%.

Transporting a high payout
All in all, transportation isn't the natural hunting ground for those sniffing around for yield. It can be tough to find solid companies in the sector that are well established and profitable enough to spit out elevated dividends... and do so on a regular basis.

These are just three of that limited group. If you've got a favorite or several not covered here, kindly let us know in the comments section below!