Kinder Morgan's (NYSE:KMI) latest earnings results came with a juicy 14% dividend hike and reassurances that the pipeline blue chip is on track to meet its targeted $2 per share dividend for 2015 -- a 15% increased over 2014. However, they also revealed that -- when it comes to sales and earnings growth -- even mighty Kinder Morgan isn't impervious to the most severe oil crash since the financial crisis.

The numbers
For the first quarter, Kinder reported earnings declined by 21% to $0.22 per share -- $0.24 when adjusted for asset impairments -- on revenue of $3.6 billion. That not only missed Wall Street's consensus estimate of $0.23 per share for earnings but fell 21% short in terms of sales expectations and represents a 11% decline in revenue compared with the first quarter of 2014.

Management credited the decline in earnings to higher interest, taxes, and depreciation, and amortization expenses and explained the decline in revenue as due to -- in the words of CEO and Chairman Richard Kinder -- "headwinds due primarily to a rough commodity pricing environment."

Of course longtime Motley Fool readers know not to focus too much on quarterly or annual revenue or earnings growth, because for capital-intensive, high-yield income stocks like Kinder Morgan, there are far more important things to focus on.

What really matters
With Kinder Morgan the thing to remember is that, first and foremost, this is a dividend growth story. Thus, the three things we care about most are distributable cash flow, or DCF; the dividend coverage ratio; and the project backlog. That's because DCF is what dividends are paid out of, a dividend coverage ratio of greater than 1 means the dividend is sustainable, and a large and growing project backlog means management's long-term dividend guidance of 10% growth through 2020 is realistic and achievable.

In terms of distributable cash flow, Kinder's results are far better than the negative sales and earnings growth would indicate. DCF was up 5.4% to $0.58 per share -- courtesy of the cost savings from the merger between Kinder and its three MLPs --  and even with the 14% dividend hike to $0.48 per share, the dividend coverage ratio of 1.21 means the payout is solid and sustainable. In fact, Kinder generated an excess of $206 million in DCF this quarter, well ahead of management's forecast of $164 million in excess DCF per quarter.

Meanwhile the backlog grew a healthy $600 million to $18.3 billion. After shrinking $300 million during the fourth quarter because of the removal of $785 million in oil projects, the fact that Kinder's backlog is growing again is reassuring news indeed. 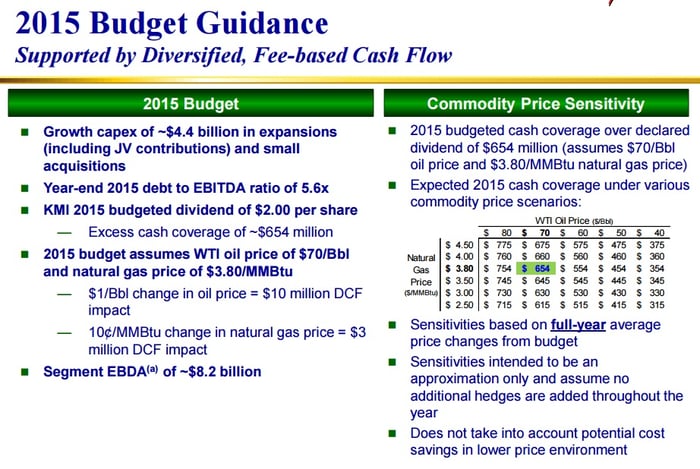 However, as this slide makes clear, even if natural gas prices were to fall to below $2.50 per thousand cubic feet and oil below $40 per barrel for all of 2015, Kinder would still be able to support its $2-per-share 2015 dividend.

What to watch for going forward
My biggest concern for Kinder remains its backlog, specifically the fears that it might shrink. Even after removing $785 million in oil projects, most of which were related to Kinder's CO2 segment, the company still has $1.8 billion in CO2 projects in its backlog, and should oil prices remain low or even fall further, some or even all of those might have to be removed. While 2015's dividend is relatively safe, a shrinking backlog might throw Kinder's long-term 10% dividend growth plans into doubt.

Bottom line: The 2015 dividend is probably safe, but oil crash pain may threaten future payout growth
Kinder's first quarter was far from a triumph. Earnings and revenue fell sharply thanks to low energy prices, yet where it matters most -- for those things that ensure the growth and safety of Kinder's dividend -- the company did admirably well, especially relative to how some other energy companies are faring. While I'd advise investors to keep a watchful eye on Kinder's project backlog, overall this quarter's results reinforce why I consider Kinder Morgan to be one of the best energy dividend stocks in America.