With oil prices off some 50% since the middle of 2014, you'd think BHP Billiton Limited (NYSE:BHP) would be concerned about its oil business. Perhaps, but that hasn't changed the fact that the company's oil and gas business is still considered one of its crown jewels. Here's why.

Where there's oil
BHP Billiton was created via the 2001 merger of BHP (Broken Hill Properties) and Billiton, two mining companies that traced their roots back to the 1800s. The oil assets largely came from the BHP side of things; that predecessor company purchased U.S. Energy Reserves Group in 1985. This investment has been augmented many times over the years, notably with the $12 billion Petrohawk purchase in 2011 that added shale drilling to the company's repertoire.

Why is a company known for mining in oil and natural gas in the first place? Indeed, there are notable differences between mining for things like iron ore, copper, and coal and drilling for oil -- which brings us to the first reason BHP Billiton likes oil: diversification. 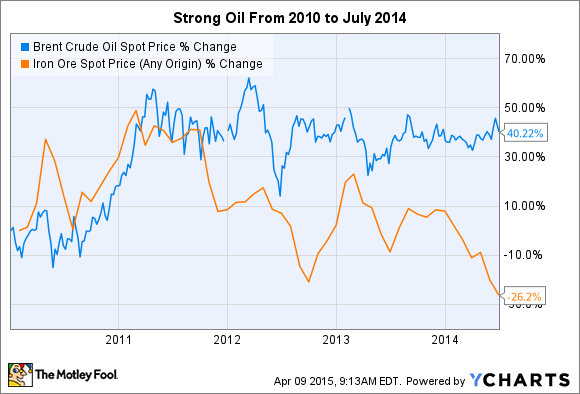 Diversification is one of the basic tenants of BHP Billiton. Essentially, when some areas are doing well, others won't be. But overall, the company's results will be more consistent than if it were focused on the boom and bust cycles of just one commodity business. For example, although oil is in the doldrums today, that wasn't the case in 2013 and early 2014 -- a period in which prices for commodities like iron ore were falling, but oil was solid as a rock.

Clearly, a lot has changed since July 2014, with oil now 50% below where it was trading back then. But that doesn't change the long-term diversification benefit of having it around.

Still a hot commodity
Demand is the second reason BHP Billiton likes its oil and gas assets enough to keep them around after the planned spin-off of some of its other commodity businesses as South32. Oil is currently one of the world's most in-demand energy source. And according to the International Energy Agency, that's going to remain true through at least 2040.

In fact, oil demand is projected to increase around 15% between 2013 and 2040. It's also worth noting that natural gas, another area in which BHP Billiton has invested heavily in recent years, is expected to see demand increase 50% over that span.

So, while oil prices are low today, there's no reason to think they'll be low forever as demand continues to expand. That's especially true since countries like China and India are rapidly moving up the economic scale, a trend that has historically led to a higher use of automobiles and the fuel to power them. A widely diversified company like BHP Billiton, which has remained profitable despite weak commodity prices, has the wherewithal to think long term when it comes to its investments, and short-term blips, like oil's drop, aren't enough to force a change in course. 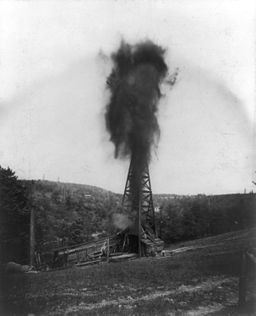 Plenty of room to run
The above benefits of oil remain true even though BHP Billiton has pulled back its oil and gas spending of late. Essentially, it's still drilling, just not as aggressively as before. For example, in the first half of fiscal 2015, the company was able to increase production by 9% in the oil and gas group despite spending falling by 14%.

So, while the company is still increasing production from its properties, it's leaving more of the vital resources in the ground for a day when prices are higher. And according to BHP Billiton, it's got decades' worth of oil and gas drilling ahead at some of its key assets. For a profitable company like BHP Billiton, there's no reason to rush.

At the end of the day, while oil's price decline is making big headlines, a company like BHP Billiton has the vision to see that oil won't remain in the doldrums forever, and the financial strength to stick out the industry's temporarily ebbing tide. That's why the diversification value, long-term demand profile, and future production opportunities BHP Billiton has in its energy business continue to make oil a key asset for the miner. That's a fact that should remain true for years to come, even though oil looks like dead weight today.