Walt Disney (NYSE:DIS) is a media and leisure powerhouse. You won't find many companies in this industry that can match Disney's combination of strong share price gains and rock-solid financial stability.

Over the last decade, a flurry of billion-dollar buyouts bolstered Disney's already fantastic character gallery. Now the company makes a mint from Marvel and Pixar properties, and the first Disney-produced Star Wars sequel is just around the corner.

With all of these balls in the air, the House of Mouse is gearing up for a second-quarter report on May 5. Hold off on the burritos and margaritas until we have a look at the financial ratios underpinning Disney's financial foundation.

Disney by the numbers

Disney's margins are soaring
Over the last five years, Disney's EBIT margin has jumped from 19% to 26%. It's an industry-leading figure that is only growing stronger while many rivals have faltered.

This ratio measures how effectively a company translates top-line sales into operating profit, and indicates how efficiently the core business is running. 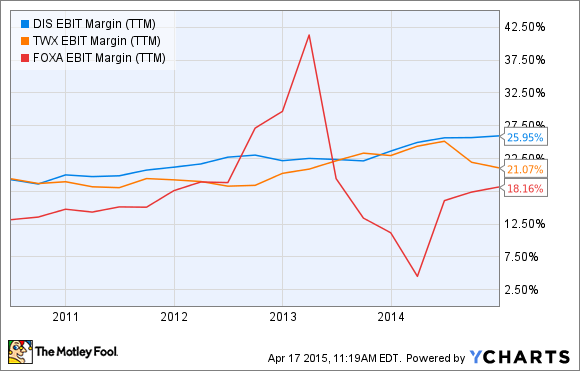 I will note that Disney still plays second fiddle to Viacom (NASDAQ:VIAB), which has an equally steady EBIT margin that is sitting a bit higher than Disney's at 29%. Viacom and Disney gain stability from their interests outside the cinema, with much of their assets invested in cable channels and real-world entertainment.

HBO and TBS have so far failed to provide this stability for Time Warner. Fox does balance its film studio results with an even larger cable and broadcast TV business, but the recent spinoff from media giant News Corp.(NASDAQ:NWSA) left the studio struggling to find its feet. I would argue that none of these industry names can match the sheer operating efficiency of the well-oiled Disney machine. 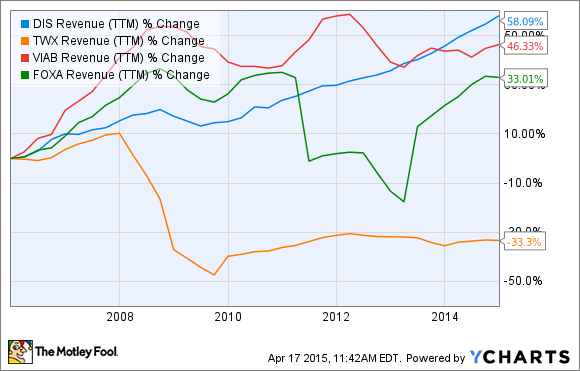 The sales trend becomes even more impressive if we zoom in on the last five years, or what I like to call "The Marvel era": 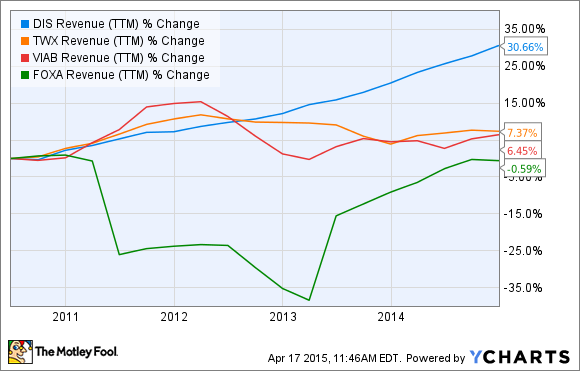 Here you see Disney's sales growth accelerating while even mighty Viacom runs into the wall. The Avengers started assembling before Disney bought Marvel, and the superhero brand has done wonders for Walt Disney's top line. Sleeper hit Frozen sure didn't hurt, either, but even that $1 billion surprise didn't change Disney's overall growth trajectory very much.

This business is built on a large and stable portfolio of dependable eyeball magnets, and Disney knows how to monetize these names for the long haul.

You might expect an industry titan and Dow Jones Industrial Average (DJINDICES:^DJI) member to offer a generous dividend yield. But Walt Disney's meek 1.1% payout is the second-lowest yield among the 30 Dow components today.

That's the bad news about Disney's dividend. It's enough to keep many income investors away from this stock, hunting for richer payout yields elsewhere. Both Viacom and Time Warner are beating Disney's yield right now, so those who crave more generous dividend yields don't even have to leave the movie industry.

But then there's the good news, which comes in two parts.

First, Disney only uses 22% of its free cash flow to cover its dividend payments at the moment. That leaves plenty of headroom for future dividend growth, if the company's board of directors should choose to explore that shareholder-friendly option.

Second, it's already happening. The Marvel era I mentioned above? See if you can find any evidence of where it took off in this dividend payout chart: 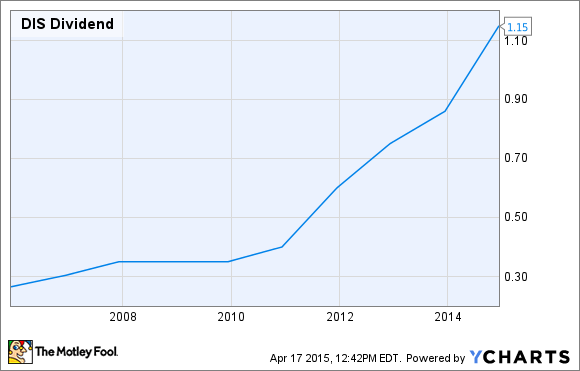 This drastic dividend payout increase hasn't resulted in beefy yields because the stock price is rising just as quickly.

If you bought Disney shares five years ago and then reinvested your dividends in more stock along the way, you'd be enjoying an effective yield of 3.4% on your original position today. In the long run, it looks like Disney investors actually can take this seemingly modest payout very seriously.

Final words
Disney is not a perfect stock, what with its modest revenue growth and small dividend yield. But the business is built on a solid foundation, backed by a rich character gallery, and guided by a visionary leadership team. I'm a Disney shareholder myself, for all these reasons and more.

This jaunt through a few important financial metrics only reminded me why I still believe in continued strong returns from that investment.