Over the past year, Whiting Petroleum Corp's (NYSE:WLL) stock is down just over 50%. To value hunters, that discount might seem like a compelling buying opportunity. But because this is an oil stock we're talking about, and we know value is really tied to oil prices, we need to look past the price discount before thinking about buying.

What the numbers are saying

The first thing investors need to realize is that there's a reason Whiting's stock has been cut in half over the past year. The sell-off in the price of oil is starting to take Whiting Petroleum's earnings down with it. Because of that, the company's underlying valuation has had to adjust to the weakening of its earnings. However, we see on the following chart that despite the stock sell-off, the valuation hasn't come down; instead, it has skyrocketed. 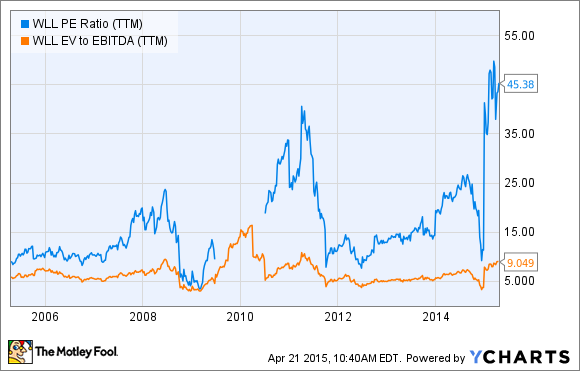 In fact, as we see on the chart, the company's P/E ratio and EV-to-EBITDA ratio are actually very high compared to the company's historical valuations. The P/E ratio looks absurd, and the EV-to-EBITDA is almost double the company's recent historical ratio. That said, this is to be expected, as both spiked after oil prices plunged due to the financial crisis in 2008-2009 and stayed relatively high throughout 2011. Since these valuation multiples could change along with oil prices, it's tough to make a confident "buy" call.

What analysts are saying
Oil prices really do tell the whole story, here, as higher oil prices will lead to a higher valuation for the stock. This isn't only because its current cash flow from producing wells will rise, but because its future returns for new wells will also increase. We see this dynamic highlighted by the analysts who follow the company, as each has a range of valuations based on future oil prices.

For example, analysts at Canaccord Genuity recently downgraded Whiting from a buy to a hold after the company raised $3 billion in debt and equity, giving the stock a $34 price target. That said, the company views the net asset value, or NAV, as worth $41 per share at a $65 per barrel long-term oil price assumption. However, if that assumption is wrong, and oil prices fall below $60 over the long term, then Whiting could be worth substantially less, as some of its projects aren't profitable under $60 a barrel. This hints at the fact that buying Whiting's stock is more a function of where future oil prices go than its current valuation.

On the other hand, there are other analysts who see much more value, here, as Wunderlich rates the stock a buy with a $50 price target. Its analyst believes the company can create a lot of value at current oil prices as it develops its Bakken and Niobrara assets.

Meanwhile, analysts from Macquarie and Barrington Research gave the company $44 and $46 price targets, respectively, each believing the company can outperform now that it has raised capital, as it can use that cash to reduce debt and invest in new high-return wells in the Bakken that still deliver solid returns at current oil prices.

This is a future CEO James Volker also envisions as he expects the company to continue growing at current oil prices. He recently told attendees at a conference that Whiting is "rigging the company" to run with oil prices at $45 to $55 per barrel. It's planning to use better technology and processes to help it cut costs so it can still grow production, and make money, even if oil prices don't budge.

Investor takeaway
It's tough to look at Whiting's valuation and make a compelling case to buy since the numbers make the company look expensive. Instead, investors thinking of buying need to have a feel for where the oil market is heading -- and if Whiting can grow in that environment.

Analysts seem mixed; some think it needs oil over $65 to be compelling, while others are compelled at current prices. The company needs to do demonstrate that it can indeed grow at oil prices in the $45 to $55 per barrel range. Until it can prove it can thrive at that oil price range, there's just not enough of a compelling reason to buy, other than betting on much higher oil prices.