When many investors think of "blue chip" tech stocks, big names like Apple, Microsoft, or Google (NASDAQ:GOOG) (NASDAQ:GOOGL) come to mind. However, a new class of blue chip tech stocks -- social media ones -- have emerged over the past few years. 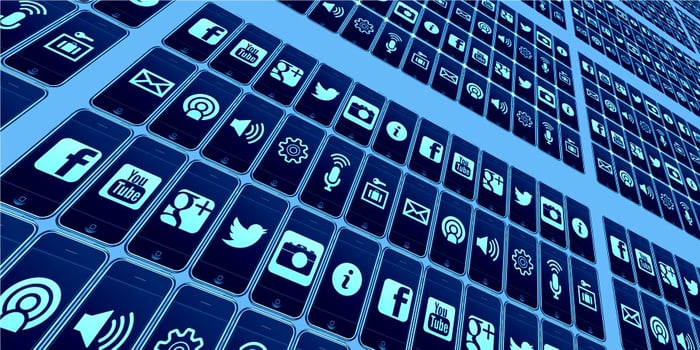 Facebook
A decade ago, Facebook had just over a million monthly active users (MAUs). Last quarter, it had 1.44 billion, making it the largest social network in the world.

During the quarter, Facebook's average price per ad soared 285% annually even though the number of ad views fell 62%. This was caused by Facebook throttling the number of ads it displayed, which inflated demand and caused prices to rise. All those positive catalysts helped Facebook stock rise more than 40% over the past 12 months.

Twitter
Twitter is less popular than Facebook, but its stock has still rallied 22% over the past 12 months. In the fourth quarter of 2014, Twitter's MAUs rose 20% year-over-year to 288 million MAUs. But that's down from 30% MAU growth a year earlier, and a far cry from the 400 million MAUs CEO Dick Costolo thought Twitter could hit by the end of 2013.

In 2014, Twitter's GAAP revenue soared 111% year-over-year to $1.4 billion. However, it reported a net loss of $578 million -- a slight improvement from a net loss of $645 million a year earlier. But on a non-GAAP basis, Twitter reported net income of $101 million, up from a loss of $34 million. That big disparity between GAAP and non-GAAP results was mainly caused by a whopping $632 million in stock-based compensation, which arguably enriches Twitter's employees at the expense of its investors.

Despite those unresolved issues, investors should note that Twitter's full-year ARPU soared from $2.68 in 2013 to $4.87 in 2014, thanks to the addition of new video ads, group chats, and other marketing tools. Its data licensing business, which accounted for 10.5% of its 2014 revenue, also continues to grow through new partnerships.

In other words, only 27% of LinkedIn's members visit the site on a regular basis. The reason is simple: whereas Facebook and Twitter are casual social networks, LinkedIn focuses on job searches and building professional connections. Therefore, users mainly access the site when they are looking to change jobs.

As a result, LinkedIn's revenue soared 45% annually to $2.2 billion in 2014, but rising expenses caused it to post a net loss of $16 million, down from $27 million in net profit a year earlier.

LinkedIn is trying to generate more return visits to its site by unbundling its apps and enhancing its site with more social features. Unfortunately, none of those efforts will likely shield it from Facebook's new enterprise networking site, "Facebook at Work."

Which is the safest play?
In my opinion, Facebook is the best blue chip social media stock to buy. Its P/E might seem high, but its forward P/E of 31 looks fairly reasonable. Facebook is also profitable on an annual GAAP basis, while Twitter and LinkedIn are not. More importantly, Facebook is evolving from a social networking company into an Internet advertising behemoth which could eventually disrupt Google's core business. Twitter and LinkedIn clearly lack that kind of firepower.