Yandex NV (NASDAQ:YNDX) on Tuesday reported a decent quarter by most measures, but the market wasn't pleased. Shares of the Russian web-search leader initially fell as much as 12% early Tuesday, but recovered the bulk of those losses to trade down about 5.3% at market close.

On one hand, Yandex's quarterly revenue climbed 13% year over year, to 12.3 billion Russian rubles (RUR), or $211.1 million. Excluding traffic acquisition costs -- which Yandex likens to sales commissions -- revenue was up 16%.

Macro headwinds: More of the same
In a statement reminiscent of last quarter's words, Yandex CEO Arkady Volozh explained: "Despite a challenging macroeconomic environment, we delivered good top-line performance with text-based advertising on our own sites growing 14%. The number of advertisers we serve grew sequentially as businesses continue to respond to the inherent advantages of contextual advertising."

Display advertising didn't fare as well in the face of macroeconomic pressures, falling 16%, to 606 million RUR. That included a 19% drop at Yandex websites, and a 7% gain from its ad network.

Altogether, aggregate paid clicks increased 12% year over year, and Yandex's average cost-per-click -- which measures how much it actually makes from each advertisement -- rose 2% during the same period.

The growing Google threat
So far so good, but if you're looking for the cause of the market's negative reaction, look no further than Yandex's slowing growth. For the current quarter, Yandex expects revenue to increase in the range of 9% to 12% year over year. Wall Street, on average, was modeling second-quarter revenue growth above the midpoint of that range, at 11.3%.

Arguably of more concern, however, is Yandex's slipping leadership position in Russia, as Google (NASDAQ:GOOG)(NASDAQ:GOOGL) muscles its way into the region. According to LiveInternet, Yandex's share of the Russian search market, including mobile, still indicates relative dominance, averaging 58.6% in the first quarter.

But that's also its fourth consecutive sequential drop, down from 59.7% last quarter and 61.9% in the  year-ago period. And it appears the Google machine is gaining steam at the expense of both Yandex and its other stateside competitors: 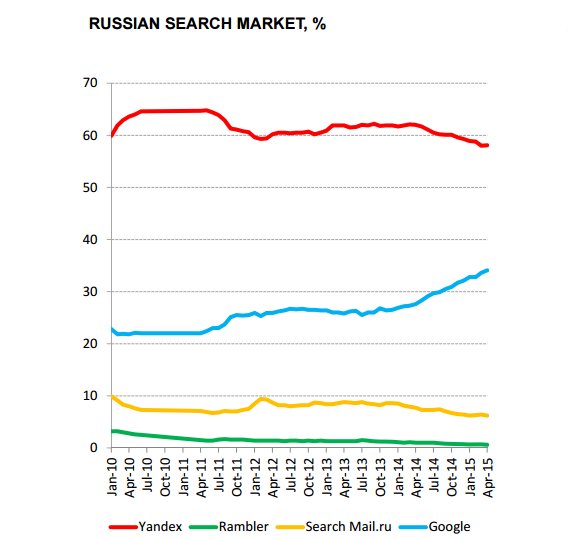 We shouldn't forget that Yandex also filed an antitrust complaint against Google last quarter in an attempt to halt this onslaught. At issue, Yandex says, are what it believes are anti-competitive practices from Google, including preventing third-party mobile app installations on Android. That's a big problem considering Android is easily Russia's most popular mobile browser.

The European Union's recently unveiled antitrust investigation against Google even sparked a big rally in Yandex shares, which currently stand around 25% higher during the past month. In retrospect, I suppose this makes Yandex's plunge today seem that much less significant.

This doesn't mean Yandex investors should write off the threat Google poses. As the creator, owner, and licensor of Android, Google has plenty of experience arguing to have cases like this either dismissed completely, or settled on more amiable terms. Even if the latter is more likely, Yandex will almost certainly have its hands full holding off its powerful U.S. counterpart.

For now, though -- and with the caveat that investors should watch Google's rising market share closely in the coming quarters -- I think these results show, for the most part, that Yandex is still admirably holding its own.