What's Happening: Shares of natural gas for transportation refueling leader Clean Energy Fuels Corp (NASDAQ:CLNE) shot up almost 11% on April 29, before settling in at closer to a 7% gain. Since April 1, the stock is up a whopping 69.8%, and at its highest levels since early September of 2014.

Why It's Happening: I spoke with Clean Energy CEO Andrew Littlefair in February, and he talked about how much the company's stock had tracked the price of crude oil over the past year or so: 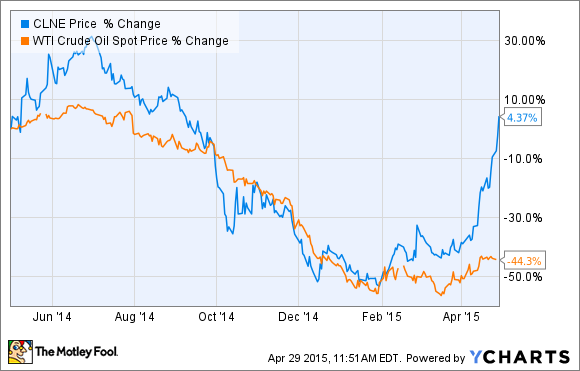 It seems that the popular thinking is that higher oil prices are good for the company, while low oil prices aren't. This is largely true since expensive oil makes it more compelling for its customers -- primarily large commercial and municipal fleet operators -- to replace gas and diesel-burning vehicles with NGVs as the cost of those fuels goes up.

However, that's an oversimplification that ignores two important things:

Overall, it's looking like Clean Energy's solid earnings report in late February started breaking the stock free from that correlation, at least so far, as it's up almost 86% since then. The company is expected to report first-quarter earnings on May 11, and has already announced a number of new refueling deals over the past month, indicating that its growth rate hasn't been affected by falling oil prices anywhere close to how the stock market expected.

Add it all up, and Mr. Market has fallen back in love with the company's stock. Will it last? Mr. Market is a fickle lover, we all know. However, if the company can keep up the positive results, the ups should outweigh the downs.

Why Clean Energy Fuels Corp (CLNE) Stock Was Up 10% Today, and 70% Since April 1st @themotleyfool #stocks $CLNE Next Article
Current