What: After being in the doldrums for the past few months LINN Energy LLC (OTC:LINEQ) and LinnCo (NASDAQ: LNCO) sprang to life in April. LINN's units rocketed 23% higher for the month while LinnCo managed to outpace it at 28% as more of the value gap between the two closed. The move, as we can see in the chart below, was largely fueled by a strong rally in the price of oil. It also didn't hurt that LINN's earnings weren't quite as bad as some were fearing. 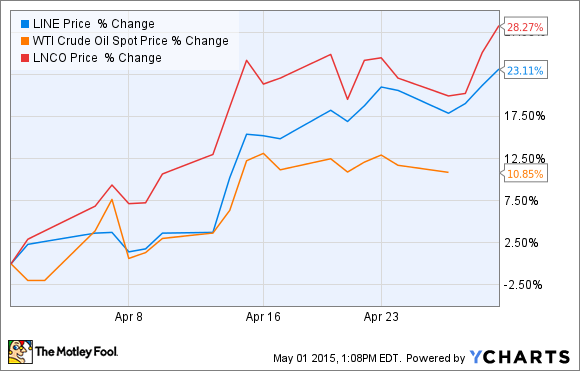 So what: Higher oil prices are good for LINN Energy as its unhedged oil production will receive better prices, which will lead to better cash flow. In fact, the company took advantage of the recent bump in oil prices to increase its oil hedges so that now 80% of its 2015 production is hedged as opposed to 70%. This gives it better cash flow visibility in 2015 and will help insulate it if oil prices turn south once again.

In addition to better oil prices the other big driver for LINN Energy in April was its solid earnings report toward the end of the month. Production grew despite the fact the company cut capex spending by 65%. The only real weakness in the quarter was that it did report a $37 million shortfall in distributable cash flow, however, that was due to a front-end loaded capex plan. For the full-year LINN expects to generate about $63 million in excess distributable cash flow as long as oil prices don't tank again.

Now what: Investors are slowly realizing that LINN Energy can actually handle weak oil and gas prices. They're also realizing that the worst case scenario is slowly being taken off the table as the oil market begins to improve. So, should oil prices continue to rally, we can expect LINN's units to head higher as well.