On April 24, Emerge Energy Services (NYSE: EMES) announced that it was slashing its next quarterly distribution by 29%. Find out why, and whether this means other high-yield frac-sand MLPs such as Hi-Crush Energy Partners (OTC:HCRS.Q) are likely to follow suit.

This quarter's payout cut is just the beginning
In the past I've warned that a distribution cut at Emerge was inevitable and could lead to a strong negative market reaction. 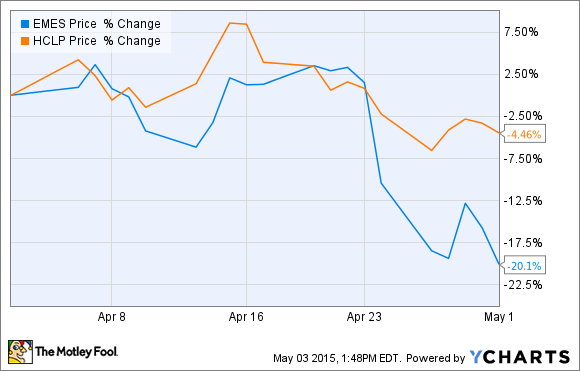 The pummeling Emerge took isn't merely due to a 29% decrease in quarterly distribution, but also because management decreased guidance for 2015's full-year payout to $3 per unit, which is 47% less than 2014's distribution.

Why the sudden and severe cut now?
Not surprisingly, the reason for Emerge's severe payout cut and major decrease in distribution guidance for the year is due to the oil crash, which leaves a possibility that the full-year payout may come in higher than what may be management's revised lowball guidance.

"While we believe that we have a number of opportunities to improve our projected results, this revised guidance is based on current market conditions," says Ted W. Beneski, chairman of the board and general partner of Emerge.

Investors in Emerge and Hi-Crush probably have two major questions at this point:

The answer to both questions is tied to the price of oil, but it's more complicated than you might imagine. 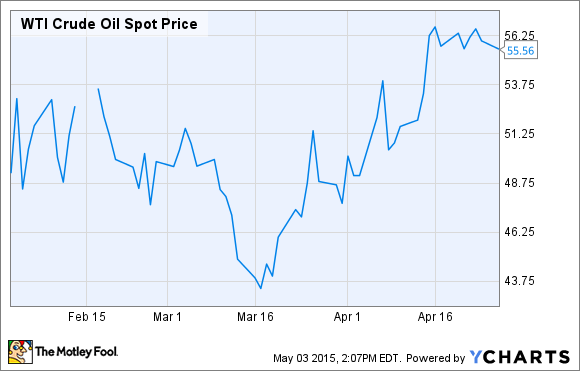 Oil has recovered 28% since hitting its recent lows in mid-March, which might make you think Hi-Crush's distribution is perhaps safe from a cut and that Emerge's full-year guidance might be overly conservative. While Hi-Crush's payout is indeed much safer, at least relative to Emerge's, it's not primarily due to the recent oil rally.

Emerge Energy Services is a variable-pay MLP, meaning it pays out 100% of its distributable cash flow, or DCF, each quarter. On the other hand, Hi-Crush Energy Partners is a more common managed-payout MLP, which tries to hold back excess DCF from quarter to quarter to generate a nice DCF cushion to ensure consistently growing distributions.

Thus, the distribution coverage ratio-- which is the DCF of the past 12 months divided by the last year's distributions and acts as an indicator of how sustainable the payout is -- stands at 1 for Emerge, and 1.65 for Hi-Crush, respectively.

So Hi-Crush's distribution by the very nature of its different DCF payout system will always be safer than Emerge's, and with oil prices rallying nicely, perhaps its generous 7.4% yield will prove secure. Then again, Hi-Crush's fourth quarter DCF coverage ratio was 1.27, down from 1.87 in the third quarter of 2014, possibly indicating that the oil crash is having a strong effect on its cash flows.

In addition, long-term income investors must remember that oil prices are notoriously volatile and unpredictable, and even a sharp oil recovery may not prove to be the immediate boon to Emerge's and Hi-Crush's cash flows that you might imagine.

Frac sand margins are being squeezed
Frac sand is primarily purchased when wells are completed, during which the shale is fracked. Thus a decline in drilling activity is bad for both frac sand demand and prices. Oil producers are likely to wait a quarter or two even when oil prices recover to make sure it's economically safe to restart drilling, thus resulting in a frac sand recovery lagging behind an oil price recovery.

Indeed according to Jim Whipkey, co-CEO of Hi-Crush speaking at the MLP's fourth quarter conference call: "it's clear that the decline in oil prices has caused a lot of rigs to be laid down across the U.S. shale plays and many of you and us for that matter, are forecasting that there is more to come."

While the sand intensity of new wells that are being completed is increasing the fact is that demand for frac sand simply can't stand up against the onslaught of a 50% reduction in drilling rigs compared to this time last year.

According to Emerge CEO Rick Shearer: "Market pricing, as well as the prices we have negotiated with our customers, have both fallen dramatically...While we have been able to significantly lower our production costs...our fixed rail expenses...were significant."

Margins are being squeezed hard enough that Emerge management has slashed its planned 2015 capital expenditure budget 68% from $110 million to just $30-$40 million, and cancelled it second planned mine in Independence, Wisconsin to conserve cash.

Bottom line: Don't expect a near-term oil recovery to bail out frac-sand MLPs
The nature of the oil-services industry means that even if oil prices recover, an improvement in frac sand margins will probably be delayed by several quarters. Thus, investors in Hi-Crush must be prepared for a possible distribution cut sometime in 2015 or 2016, and Emerge investors shouldn't necessarily count on a better-than-forecast 2015 payout.