It's well known that Intel (NASDAQ:INTC) typically applies its "tick-tock" development methodology to its processors. A "tick" will take a proven architecture, perhaps with some minor tweaks here and there, and move it to a brand new manufacturing technology. This usually brings cost, performance, and power consumption benefits typically associated with better chip manufacturing technology.

Then, about a year following the "tick," Intel's teams will use the same manufacturing technology that was used in the "tick" chip to deliver architectural enhancements to further improve performance, features, and power consumption.

Today, I'd like to tell you the core counts that you should expect from Intel's next generation 14nm Xeon E7 part -- the "tick" to the recently launched Haswell-based Xeon E7 v3 -- and the 14nm Skylake part aimed at micro-servers -- the "tock" to the recently released Xeon D chips.

More cores all around

As I was poking around LinkedIn, I came across a profile of a former Intel engineer who claims to have worked on two 14-nanometer server processors. The first part that the engineer claimed to work on was described as a "24-core" Xeon processor, and the second was described as a "10-core" part targeted at micro-servers.

The 24-core part is likely the chip code named Broadwell-EX, almost certainly destined to be marketed as Xeon E7 v4. I believe that the 10-core micro-server-oriented part mentioned is the Skylake-based follow on to the 8-core Broadwell-based Xeon D parts that Intel launched earlier this year.

If these turn out to be the core counts for the top Broadwell-EX and Skylake-based Xeon D chips, respectively, then these would represent 33% and 25% increases from their predecessors.

How do these compare with historical trends?
In the chart below, I show the trend in core count across the generations of Xeon E7 products: 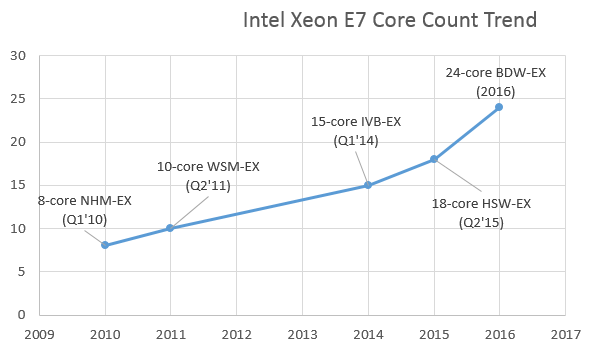 From Nehalem-EX through Haswell-EX, the average per-generation core count increase has been 31.67%, so Broadwell-EX's 33% increase looks pretty good. Further, note that there was a very large time delta between Westmere-EX (a 32-nanometer "tick") and Ivy Bridge-EX (a 22-nanometer "tick").

If Intel had launched a Sandy Bridge-EX part in between Westmere-EX and Ivy Bridge-EX -- with, say, 12 cores -- then the average per-generation core count jump would have averaged out to be smaller, making the core count increase in going to Broadwell-EX look more impressive.

Trying to look into the future of Xeon E7
We don't have enough historical data on Xeon D core counts to be able to reasonably guess a core count for the post-Skylake Xeon D product, but I think we have enough historical Xeon E7 core count data to be able to guess at what kind of core count we'll see with Skylake-EX. Intel appears to make more substantial core count increases when it moves to new manufacturing technologies. This makes sense given that new manufacturing technologies significantly shrinks the area that a core, in addition to other parts of the chip, requires.

I suspect that Intel won't get another 33% increase as it's likely to see from Haswell-EX to Broadwell-EX. It's more likely to be in-line with the 20% increase that Intel saw in going from Ivy Bridge-EX to Haswell-EX on the same 22-nanometer node.

A 20% increase from 24 cores would imply 28.8 cores. Because I don't think Intel will want to market chips with 29 cores, my guess is that Intel will find a way to cram 30 cores into Skylake-EX. This also just happens to be a 25% core count increase from what I believe Broadwell-EX will have.

A 25% increase in core count, coupled with the performance enhancements that Skylake is expected to bring, should make a Skylake-based Xeon E7 quite an interesting part.