Calumet Specialty Products Partners (NASDAQ:CLMT) has long been my favorite refiner due to its previously strong record of distribution growth and market-beating total returns. 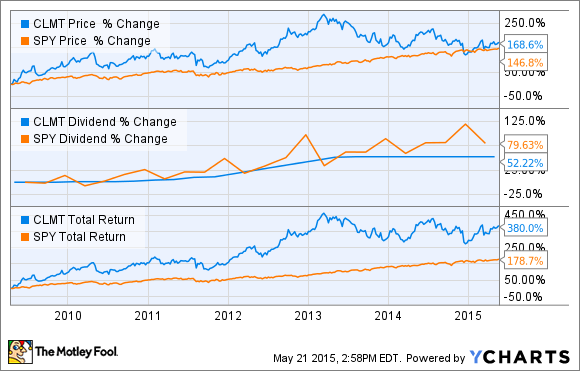 However, in recent quarters, the distribution has not only failed to grow, but Calumet has struggled to generate sufficient distributable cash flow, or DCF, to cover its payout, stoking fears that a distribution cut may be necessary. Let's examine three reasons why the payout is not only safe, but potentially about to start growing again in the quarters ahead: rapid growth in Adjusted EBITDA and DCF, good execution on major growth projects, and an improving balance sheet.

Another blowout quarter
Calumet's fourth-quarter results were a blowout, and this quarter's results were equally impressive.

Don't expect every quarter to be this good, because refining is a business with high seasonal cyclicality, and Calumet's fuel-products segment -- which accounted for 27% of Adjusted EBITDA during the past year -- can be highly affected by volatile spreads between different oil prices. However, there's a major reason to remain optimistic about Calumet's ability to continue aggressively growing both its Adjusted EBITDA and DCF going forward. 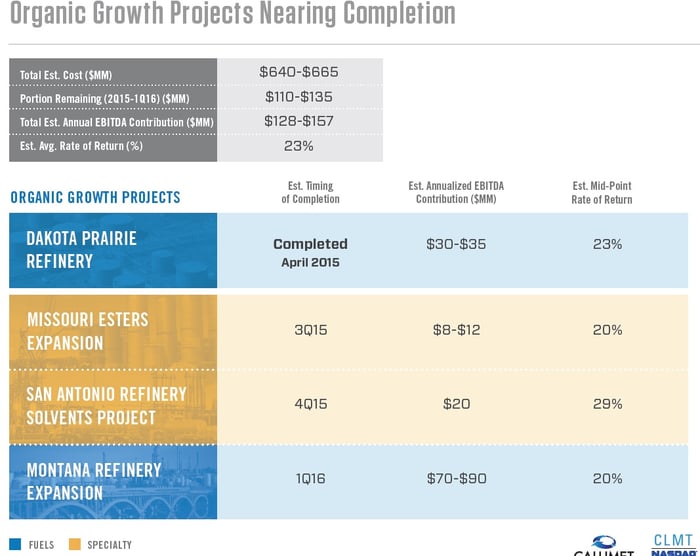 As this table shows, Calumet has been aggressively investing in major projects -- the last one to be completed within a year -- that should boost Adjusted EBITDA by around $143 million annually, or about 41% compared to the last 12 months.

According to Bill Hatch, interim CEO, the completion of these projects may kick-start the MLP's distribution growth: "As our organic growth projects begin to generate cash flow during the next nine months, we anticipate the partnership will be well positioned to consider an increase in the quarterly cash distribution from current levels."

To further boost future cash flows, Calumet recently announced a 10-year deal with Plains All American Pipeline to provide its Shreveport refinery with 20,000 barrels per day of discounted Midland or Cushing crude beginning in the first quarter of 2017. Calumet estimates this deal will generate $7 million to $8 million in annual cost savings, which should directly boost DCF.

Liquidity and balance sheet getting stronger
Refining is a capital intensive and fragmented industry, and Calumet has a good track record of diversifying its business empire by acquiring lots of oil and refinery-related businesses. Thus, a strong liquidity position -- part of a strong balance sheet -- is important. This is because it allows management to continue investing in growth projects and potential acquisitions, and also allows the payout to remain safe for those quarters where DCF fails to cover the distribution.

Calumet's liquidity position has improved 40%, from $322 million last quarter to $452 million as of March 31. However, this liquidity boom isn't all good news. The MLP recently had a secondary offering where it sold 6 million additional units -- representing 8.5% dilution -- to raise $157.3 million to pay off some high-interest debt.

Speaking of debt, in the first quarter, Calumet was able to sell $325 million in 2023 bonds at a 7.75% interest rate. While those borrowing costs aren't exactly cheap, when compared to its previous bond sale of $275 million in bonds yielding 9.625%, you can see that it's a larger amount of cheaper capital.

Management so far is on track to achieve its goal of reducing its leverage ratio -- debt to adjusted EBITDA -- to less than 4 times. In June of 2014 that figure was a ghastly 7.4 times, but since then has been reduced to 4.8. If management can get below that 4.0 level, it's likely that Calumet will be able to achieve substantially lower borrowing costs, and thus reduce its cost of capital. That's because debt/adjusted EBITDA ratios are a key metric looked at by credit rating agencies and a ratio under 4.0 might help Calumet earn an investment grade rating.

However, investors need to be aware that, while Calumet will likely grow its payout in the future, the days of super fast distribution growth are behind it. That's because the 52% payout growth between 2009-2013 placed Calumet in its top tier of incentive distribution rights.

That means that 50% of marginal DCF will go to Calumet's general partner, and less will be available to grow the payout for unit holders.

Bottom line: Current payout is likely safe, but don't expect previous payout growth rate
The past two quarters exemplify why Calumet Specialty Products Partners is my favorite refiner, and an excellent choice for a diversified high-yield income portfolio. Its top-quality management, strong ability to diversify and grow their business model into various high-margin specialty products, and strong upcoming Adjusted EBITDA and DCF additions should ensure the safety of the current payout. However its top tier IDR rights means that future payout growth will be far slower than in recent years, a fact that investors need to keep in mind.