Payments processor PayPal, which eBay (NASDAQ:EBAY) last year decided to spin off, is gearing up for its IPO. We're still waiting on PayPal to announce the offering size, pricing, and date, but eBay's own earnings reports offer plenty of insight regarding the upcoming IPO. Let's discuss PayPal's key strengths and weaknesses, and whether you should buy some shares.

Fundamental strengths
eBay acquired PayPal in 2002 for $1.5 billion. The payments platform revolutionized payments by email, and was eventually adopted by a wide variety of third-party websites. PayPal then expanded its online presence into brick-and-mortar stores with payment kiosks, Bluetooth beacons, physical cards, and card-swiping dongles for smartphones. In 2013, eBay acquired Braintree -- the owner of peer-to-peer payments app Venmo -- to strengthen PayPal's mobile presence.

PayPal's top line has recently grown at a much faster rate than eBay's Marketplace business. Last year, PayPal's revenue rose 19% annually to $7.9 billion, accounting for 44% of eBay's top line. That outpaced 8% growth at the Marketplace unit, which accounted for 46% of eBay's revenue. PayPal's total payment volume also surged 27% to $48.3 billion.

Plenty of growth opportunities
By itself, PayPal is a "pure-play" investment on the electronic payments market. Forrester Research estimates that U.S. mobile payments annually could surge from $12.8 billion in 2013 to $90 billion in 2017. According to PayPal President and incoming CEO Dan Schulman, roughly a third of PayPal transactions now occur on mobile devices, compared to just 1% in 2010. 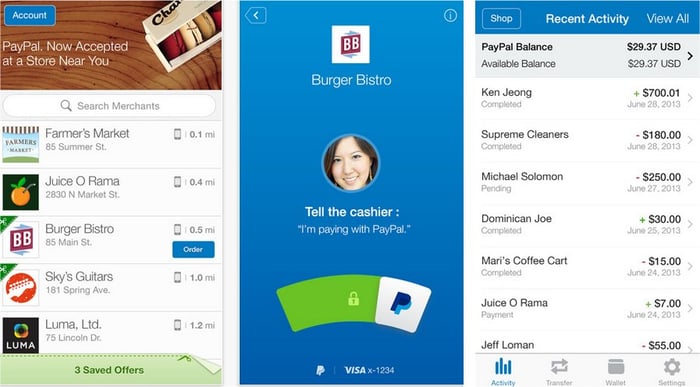 For mobile users, PayPal offers a wide array of payment options. Debit cards, credit cards, and loyalty reward points can all be stored within the app across multiple devices. Popular start-ups including Uber and Airbnb also use PayPal to process in-app payments.

In addition, PayPal gained the One Touch system from Braintree, which allows consumers to pay without reentering their payment information across multiple devices. PayPal also recently signed a partnership with Bigcommerce, which provides e-commerce services to over 90,000 online retailers. The agreement will add PayPal as a payment option across that massive network.

Former PayPal President David Marcus shunned near-field communication payment solutions in favor of Bluetooth and online payments, but Apple (NASDAQ:AAPL) Pay and Google (NASDAQ:GOOG) (NASDAQ:GOOGL) Wallet's unwavering support for NFC finally convinced PayPal to change its tune. To catch up in NFC payments, PayPal recently agreed to acquire Paydiant, the start-up that licenses technology to enable retailers to create their own mobile wallet apps. MCX, the consortium of big-box retailers that wants to launch its own mobile wallet, CurrentC, is one of Paydiant's biggest customers.

Potential weaknesses
Despite those strengths, PayPal also has several glaring weaknesses. First and foremost, PayPal already faces intense competition in the mobile payments space. Apple Pay threatens to marginalize PayPal's importance on iOS devices, while Google Wallet could do the same on Android. Amazon.com (NASDAQ:AMZN) has also been spreading its own PayPal-like payments platform across third-party websites.

Last year, Amazon expanded that network into brick-and-mortar stores with a card-swiping dongle and peripherals that convert mobile devices into cheap point-of-sale systems. That made it a disruptive threat to both PayPal and Square, which started the trend of converting iPhones and iPads into card-swiping registers with dongles and docks. Both Google Checkout and Amazon Payments currently match PayPal's standard 2.9%+ $0.30 transaction fee.

Meanwhile, social networks have realized that peer-to-peer payments can be made within their own ecosystems. That's why both Facebook and Twitter teamed up with Stripe to add e-commerce features to their networks. Those efforts, along with peer-to-peer payments, could threaten PayPal and Braintree's Venmo, which still operate separately.

Over half of PayPal's revenue comes from non-U.S. markets, so a strong dollar could weigh down its top and bottom-line growth. That dependence could also result in regulatory and PR problems in the future -- the Office of Foreign Assets Control recently fined PayPal for ignoring U.S. sanctions and permitting money transfers to accounts in Cuba, Sudan, and Iran.

The key takeaway
PayPal is certainly the better half of eBay to own, but that doesn't mean its future growth is guaranteed. The electronic payments market is much more crowded today than it was when PayPal was founded in 1998. Heavyweight competitors such as Apple, Google, and Amazon -- which could use mobile payments as loss-leading ecosystem plays -- could slow PayPal's growth. Social networking is also changing how people pay each other, which could hurt Facebook but harm PayPal, which lacks a comparable social presence.