I like to look for companies that do something unique in an established industry, and Digital Realty Trust (NYSE:DLR) is an excellent example. Digital Realty is a real estate investment trust, but instead of owning apartments, retail properties, or office buildings, it develops, owns, and operates data centers. The need for this type of property has grown tremendously over the past several years, but there still could be plenty of upside for Digital Realty shareholders.

What Digital Realty Trust does

While there is a broad array of tenants, Digital Realty's top 10 tenants made up 34% of the company's rental income as of March 31, and the list is an impressive "who's who" of the tech sector. Included among the top 10 are industry heavyweights CenturyLink, IBM, Facebook, and AT&T. In other words, Digital Realty's biggest customers are strong, stable companies with growing data needs.

The strategy
Digital Realty does acquire properties from time to time, but its major source of growth is through development. In fact, for 2015, the company expects to make less than $200 million in acquisitions, but intends to spend between $750 million and $850 million on developing new properties.

Most of the properties under development (81%) are pre-leased, and the average tenant signs a 12-year lease with annual rent increases of 2.5%-3% built in.

A big part of the current strategy is to lease up the company's existing inventory. Occupancy was at 92.1% at the end of March, which isn't terrible but isn't ideal, either, and has steadily dropped over the past year or so. As you might imagine, a full data center is a more profitable data center; according to Digital Realty, a 50% occupied property will produce a 4% annual yield on investment while a 100% occupied property will produce an 11% yield, so it is crucial to keep occupancy as high as possible (although it's certainly comforting to know that occupancy could be cut in half and the company could theoretically remain profitable).

Another big aspect of the company's strategy is to sell off nonstrategic assets in order to better deploy capital elsewhere, which the company refers to as capital recycling. During the first quarter, Digital Realty produced $190 million in net revenue by selling three properties, of which $95 million was profit. It then puts this capital to work wherever management feels will generate the best return for investors, such as development.

Going forward, the company sees opportunity in the midmarket, as well as in the development of unique and innovative data center products. The company also intends to place more emphasis on filling its data centers with tenants before the facilities are built, which over time should help raise occupancy.

Fantastic performance, but attractive valuation
Over the past decade or so, Digital Realty's performance has been absolutely stellar. The company has produced a 19% average annual total return, and has grown funds from operation, or FFO, at a 15% rate. Income seekers would also be thrilled with an average annual "raise" of 14%. 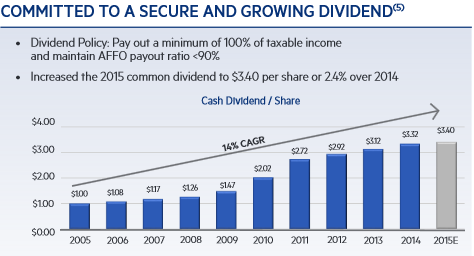 While Digital Realty has performed tremendously and looks attractive as an investment, the stock is valued well below its peers. First, on a positive note, the 5.12% dividend yield is well above the REIT sector average of 3.4%, and the company's debt levels are also below most of its peers'. 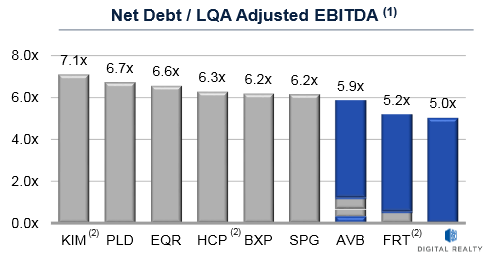 The most widely accepted way of measuring a REIT's performance is by its FFO -- as opposed to earnings per share -- and by this metric, Digital Realty looks rather cheap. The average REIT trades for 17.5 times its estimated 2015 FFO and Digital Realty's multiple is just 13.8. Also, it trades at a significantly lower premium to its net asset value than its peers.

The best may be yet to come
Even after the company's tremendous decade of growth, its best years might still be ahead. Over the next few years, global IP traffic is expected to grow by 23% per year on average, so there will be no shortage of demand for Digital Realty to fill.

Now, no stock with double-digit return potential is without risk, and Digital Realty is no exception. For starters, since it invests in a single, specialized type of real estate, it is vulnerable to slowdowns or other turmoil in the information-technology industry. And since its tenant base is "top-heavy," losing a major tenant could be a big blow to the company's profits.

However, all signs point to years of continued growth and prosperity for Digital Realty. With a high dividend and low valuation, this is one REIT that belongs on your radar.