Americans are gearing up to hit the road this summer, but that doesn't mean they won't be able to take their healthier eating habits with them. Source: Zach Dischner, Flickr.

It's June, and you know what that means. It's almost time for the summer road trip!

According to the U.S. Travel Association, Americans racked up some 1.7 billion leisure-time trips in 2014, spending $928 billion in the process. While you might think much of that money was spent on recreation and amusement activities, or even shopping, in fact, food was the biggest item vacationers were buying.

Where retail and recreation combined for a total expenditure of $187.4 billion last year, food exceeded that with a $220.3 billion tab. Not surprisingly, much of that eating is not what you'd consider healthy.

If you crave something besides a hot dog, perhaps you think of McDonald's. In 2010, the site Data Pointed estimated that the furthest distance you'd have to travel to visit a McDonald's (NYSE:MCD) restaurant in the U.S. was 115 miles, but only if you happened to be in the middle of the Sheldon National Wildlife Refuge in the remote northwest of Nevada. Fortunately for most people, it's a much, much shorter trip than that. 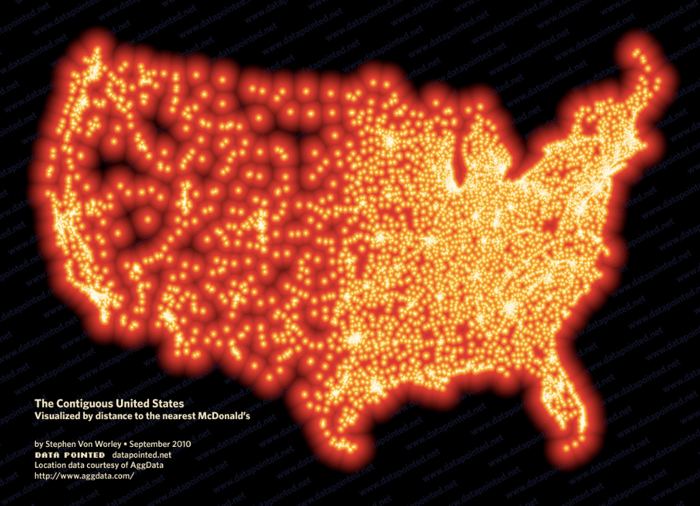 McDonald's is closer than you think, and it's only in the remotest reaches of the desert that you won't find a Golden Arches nearby. Source: Data Pointed..

But consumer tastes are changing, and one of the very reasons McDonald's stock is in the doldrums is because its food is viewed as unhealthy. Comparable-store sales, or those that strip out growth due to opening new locations or from discontinued operations, have fallen 14 out of the last 17 months, and the situation has gotten so bad, the restaurant chain announced it will no longer report monthly sales.

Fast and healthy?
Still, when you're trying to get from Point A to Point B in the summer heat, fast food is a convenient option. If you want to find something healthier for yourself, the folks at Health magazine can help.

They started with a list of the 100 fast-food restaurants with the most locations in the country and scored them on factors such as their use of healthy fats, healthy sodium counts in entrees, how available nutritional information was to consumers, and whether they used organic ingredients. They then came up with a list of the top 10 fast-food restaurants where you can grab-and-go healthy bites, which ought to be a particularly handy list for travelers this summer.

There were a couple of surprises on the list. First, while you might expect Chipotle Mexican Grill (NYSE:CMG) to be on the list because of its commitment to "food with integrity" and its recent decision to go GMO-free, it wasn't as highly ranked as you might expect. It came in sixth place because, while it's fresh ingredients and burrito bowl gave consumers the opportunity to avoid carb-heavy tortillas, loading up on sour cream and cheese could put you over the edge, according to Health.

Perhaps even more surprising was that McDonald's made the cut -- and in eighth place, no less! While a Big Mac weighs in at 530 calories, and a Double Quarter Pounder with Cheese tips the scales at 740 calories, Health found there are quite a few healthy selections, including apple dippers with low-fat caramel sauce, low-fat milk and fruit juices, and better-for-you canola oil fries.

McDonald's also just recently introduced the "superfood" kale as part of several breakfast bowls in nine Southern California markets. Moreover, the burger chain was up front about all of its nutritional information, which is in keeping with new CEO Steve Easterbrook's commitment to making McDonald's a "modern, progressive burger company."

Top dog in food to go
So, which fast-food joint was Health's top chain for healthy food options? Panera Bread (NASDAQ:PNRA) won that honor; it "wowed" the magazine's judges with a "comprehensive menu of healthy choices for every meal."

Their favorite item was the focaccia bread half-turkey and artichoke sandwich, with which you could get a bowl of black bean or garden vegetable soup, but kids were also able to get meals that ranked highly with the registered dietitians on Health's panel of judges.

Here's the complete list of top fast-food chains in order of preference: What Health found was that restaurants are increasingly making food that reflects the changing diets and preferences of consumers. Or, as the magazine puts it, they're "creating menus that look more and more like what we'd cook ourselves (if we had the time)," and offering up greater variety, including dishes from Mexican, Asian, and Mediterranean menus.

Gassing up and heading out
As we fill up our cars and head out onto the highways this summer, it's no longer required that our meals consist solely of greasy, fattening foods. While those will likely still be part of our vacation dining experiences (we're on vacation, after all -- we can enjoy some guilty pleasures), an ever-growing number of Americans can now take heart that healthy alternatives can be had at a moment's notice.