Ford isn't selling as many of its new F-150 pickups as investors and fans would like. But that's not necessarily bad news for the Blue Oval. Source: Ford Motor Co.

At first glance, May was a rough month for Ford (NYSE:F) and the latest version of its F-150 pickup. Sales of Ford's full-size pickups were down 9.7% from May of last year even as General Motors' (NYSE:GM) Chevy Silverado and Fiat Chrysler Automobiles' (NYSE:FCAU) Ram both posted solid gains.

The F-Series, which includes the F-150 and its Super Duty siblings, might be Ford's most important and profitable product line. So a drop in sales would seem to be bad news.

It's true that GM and FCA have reason to celebrate on the pickup front right now. But it's also true that the news for Ford is better than you might think. Here's why.

The Chevy Silverado is gaining ground on Ford, but that's not the whole story
Sales of the Chevy Silverado line increased by 10.6% in May. Its retail market share was up 3 percentage points year over year to 27%, GM said, citing data from J.D. Power.

With sales of Fiat Chrysler's Ram up 8% in May, it's clear that the Silverado's stolen market share came mostly from Ford. And it's an honest win: GM appears to be selling more pickups without resorting to heavy incentives, or discounts. Its overall level of incentives as a percentage of transaction prices was unchanged from a year ago. That should all add up to nice profit gains when GM reports second-quarter earnings next month.

But here's the thing about Ford's situation: F-Series sales aren't down because of low demand, they're down because of tight supply. Ford is just now getting close to full-speed production of its new-for-2015 F-150.

To make the new truck, with its aluminum body panels, Ford had to make extensive changes to its two pickup factories. That meant weeks of downtime, and that meant a lot of lost production. Ford began May with about half of its normal F-Series inventory, U.S. sales chief Mark LaNeve said Tuesday.

But the good news for Ford is that the law of supply and demand is alive and well. Ford's new F-150 is a hot commodity: reviews have been great, and the automaker's truck fans are excited. In other words, demand has been terrific, which means Ford got great prices for its hot new trucks.

For investors, the latest F-150 news is mostly good
For Ford truck fans, it might be hard to watch GM gain ground in the sales race. But for Ford investors, there's plenty of good news here.

For starters, Ford's ramp-up of production of the new F-150 remains roughly on plan. There have been some snags (The Wall Street Journal reported that a supplier has had trouble delivering enough frames for the new truck, which has temporarily slowed production), but Ford says it will make some of that up by eliminating the traditional two-week summer shutdown at its truck factories this year.

Meanwhile, Ford and its dealers are making the most of the trucks that are available, selling loaded variants to eager buyers at strong prices. That's important for Ford as a company: Pickups are Ford's best-selling and most profitable products in the U.S., and the Blue Oval's North America regional business unit is carrying the company right now. 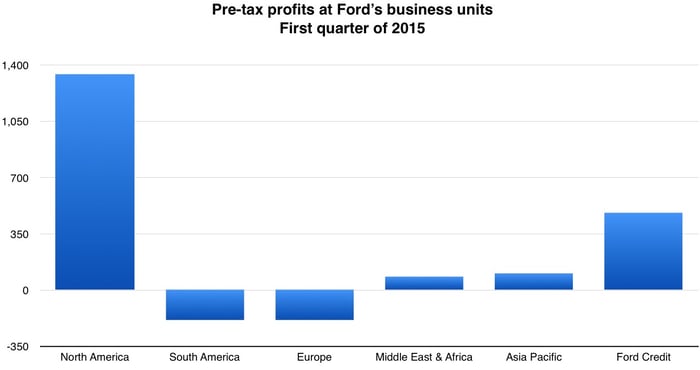 Data source: Ford Motor Co. All amounts shown are pre-tax and are in millions of U.S. dollars.

Put another way, generating as much profit as possible from each pickup sale in the U.S. while supplies are tight is critical to boosting Ford's global bottom line.

If you like Ford's trucks, check out its stock
If you're a Ford fan, there are good reasons to look at the company as an investment. As it gets Europe and South America squared away, and starts to profit from its big expansion effort in Asia, Ford's profits are likely to grow -- especially if truck sales in the U.S. stay strong once the factories building the new F-150 are up to full speed.

But in the near term, the best news for Ford investors is that the launch of the new F-150 appears to be going quite well. Same goes for other Ford launches, such as those for the all-new Edge and refreshed Explorer. The new products are getting great reviews, buyers are flocking to dealerships, and there have been no major snags or quality issues so far.