The offshore drilling sector runs with a fairly simple business model. Drilling contractors own rigs and then lease them out to oil companies at a premium. Typically these rigs can earn fat dayrates that can be upwards of half a million dollars per day. That cash flow is usually more than enough to cover the rig's operating costs leaving the offshore driller with plenty of room to spare. That spare cash flow is then sent back to investors via juicy dividends and used to pay down the debt used to acquire more drilling rigs.

It's a model that works well until oil companies decide not to drill as many offshore wells, which is what has been happening over the past year. This is causing day rates to collapse and many rigs can't find work. That leaves those companies with a lot of debt in deep trouble as they struggle to make ends meet. On the other hand, companies that shied away from debt or have a really strong contract backlog are less susceptible to a downturn. Three of the best are Atwood Oceanics (NYSE:ATW), Seadrill Partners LLC (OTC:SDLP), and Diamond Offshore Drilling Inc (OTC:DO).

Built to handle the storm

Atwood Oceanics has those two desirable characteristics as the company has a rock-solid balance sheet with low leverage and a strong contract backlog totaling $2 billion. That backlog, as noted on the following slide, covers nearly all of the company's current fleet for the next year. 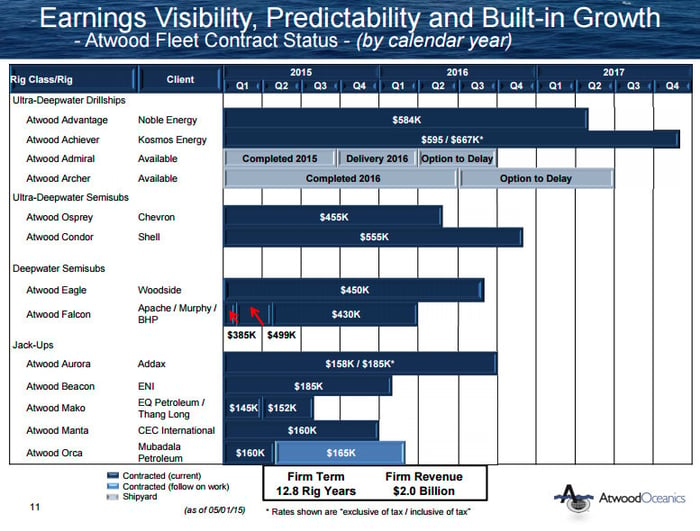 Because of that backlog the company can fully fund its entire newbuild program, which consists of the two ultra-deepwater drillships, without raising outside capital. Further, as that slide notes, the company has the option to delay those two drillships if it needs more time to find either a contract. This gives the company a lot of flexibility to maneuver through the storm in the offshore drilling market without having to make tough decisions such as cut its dividend or dilute its investors by raising equity capital to plug a hole on its balance sheet. Atwood is a company that is built to last and should have no problem surviving the current storm in the offshore drilling industry.

A floating fortress
Diamond Offshore's strength lies in its balance sheet, which is the strongest in the offshore drilling industry. The company only has $2 billion in debt, which when compared to its $7.5 billion in total assets makes it one of the least levered companies in the space. As the chart below shows its debt-to-equity ratio is the best in the group, which includes Atwood Oceanics, Transocean (NYSE:RIG), Seadrill (NYSE:SDRL), or Ensco (OTC:VAL). 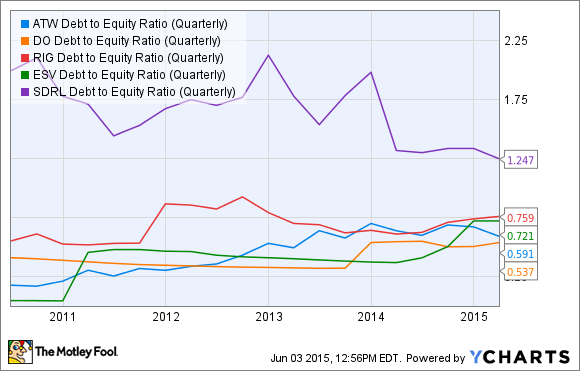 That fortress-like balance sheet enables the company to focus on its business instead of focusing on fixing its balance sheet like many of its other peers.

Diamond's only weakness is its contract backlog, which isn't as robust as its peers. However, with its balance sheet strength the company doesn't have to scramble to take break even contracts and can instead idle rigs until conditions improve.

Strong coverage
Seadrill Partners, on the other hand, doesn't have the balance sheet strength of Atwood Oceanics or Diamond Offshore Drilling. However, it is better than both on contract backlog strength. As the slide below shows the company's backlog stands at $5 billion with an average remaining term of 3.4 years. 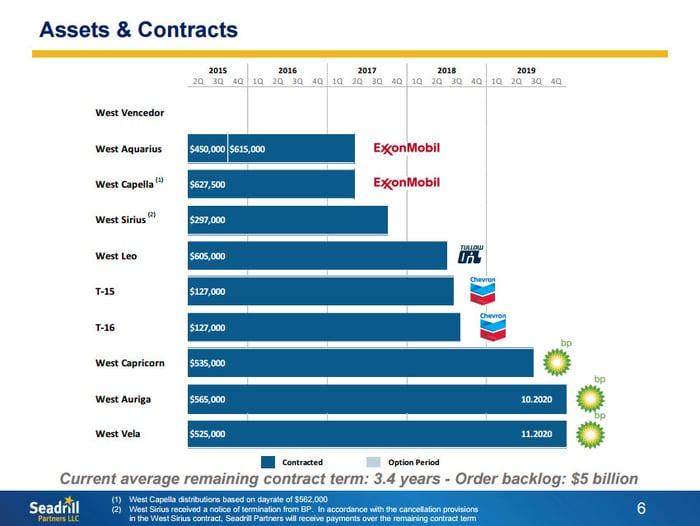 It's worth noting that only one of the company's rigs doesn't currently have a contract while the rest are under contract through at least 2017. That robust backlog will provide Seadrill Partners with very stable cash flow that it can bank on during the downturn. Further, the company has a lot of built-in growth thanks to its relationship with Seadrill as it can acquire additional fully contracted rigs from its parent. That combination of locked-in income and built-in growth makes Seadrill Partners a great offshore drilling stock to buy amid the downturn.

Investor takeaway
The best offshore drilling stocks have two things in common: Relatively low debt and a solid contract backlog. Both are key to a company's ability to weather the market downturn as low debt provides flexibility while a strong backlog can keep cash flowing until market conditions improve.