The treatment of cancer is undergoing a potential revolution with the advent of powerful new immunotherapies and small molecule, all-oral treatments. The ultimate goal is to develop chemotherapy-free treatment regimens that are more effective and tolerable across a wide diversity of malignancies than standard chemotherapies.

Investors recently got their first taste of these next-generation cancer treatments with the approval of Bristol-Myers Squibb (NYSE:BMY) and Merck's (NYSE:MRK) respective PD-1 inhibitors Opdivo and Keytruda. Although these drugs don't work for everyone, they have generated extremely durable and potent responses in patients with certain hard-to-treat tumor types. And we're just getting starting along the path toward exploring a host of immunity-boosting therapies that could prove vital in the fight against cancer.

From an investing perspective, immunotherapies undoubtedly offer a tremendous opportunity. While estimates vary widely among industry experts, the market for immune-activating cancer treatments is expected to range from $20 billion to $50 billion by 2030, depending, in part, on how effective they turn out to be against particularly stubborn malignancies such as brain and liver cancer.

Armed with this insight, let's consider the growth prospects for two key names, AstraZeneca plc (NASDAQ:AZN) and Agenus (NASDAQ:AGEN), in the rapidly emerging field of immuno-oncology.

AstraZeneca is perhaps the bellwether stock for immuno-oncology
Although the British pharma giant is lagging behind peers Bristol and Merck in commercializing an immuno-oncology product, the company's vast clinical pipeline of immunotherapy candidates makes it a top dog in the field.

In its extensive clinical update at the recent American Society of Clinical Oncology, or ASCO, meeting, the biopharma shows that its aggressive approach to immuno-oncology is paying off in a big way. Specifically, Astra is commencing 16 mid- and late-stage trials across a diversity of cancer types, lines of therapy, single agents, and a wide swatch of combination treatments. That's a big step given that Astra was just beginning its preclinical and early stage work in immuno-therapy last year. 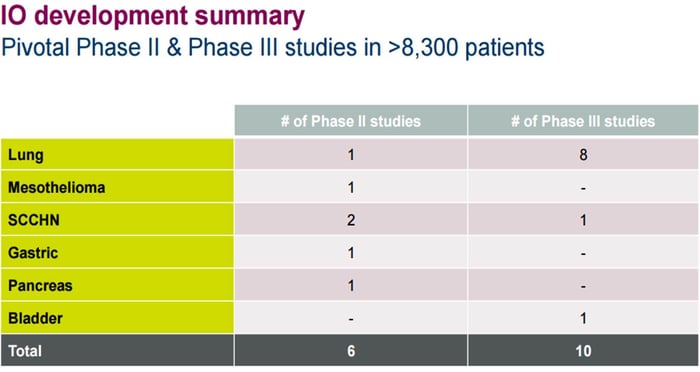 The most exciting thing for investors and patients alike is that Astra's rapid clinical progress could churn out an approved product sooner than many predicted. One of the key themes of the ASCO meeting was that patients tended to either respond, or not, within four months of treatment with immuno-therapies such as MEDI4736, a programmed death-ligand 1 compound now in a key late-stage study for non-small cell lung cancer. In short, there's a fairly good chance that some of these trials could be halted early for efficacy, and the drugs then fast-tracked through the regulatory process.

Agenus is small-cap biopharma with an extensive immuno-oncology platform
Agenus has dabbled in the immuno-oncology arena for years, but it dove in with both feet last year by acquiring 4-Antibody.

Agenus' immuno-oncology platform has both an antibody discovery component and a compelling group of ready-made checkpoint modulator antibody candidates. As a result, pharmas like Incyte Corp. (NASDAQ:INCY) and Merck were quick to sign exploratory research deals with Agenus following its acquisition of 4-Antibody.

Incyte is co-developing drug candidates for four checkpoint proteins (GITR, OX40, LAG-3, and TIM-3) with Agenus, paying the tiny biopharma $60 million total in a cash and stock deal. Merck, on the other hand, inked a deal worth up to $100 million in milestone payments, plus royalties, to develop drugs for two undisclosed therapeutic targets. Apparently this collaboration is going well, as Merck recently extended the discovery period to April 2016.

Are either of these drugmakers a compelling buy right now?
Astra is in a volatile transition period due to the loss of exclusivity for former top-selling drugs such as Nexium. Even so, it's hard to ignore just how quickly the biopharma has advanced its most promising immuno-oncology candidates. Topping it off, Astra has recently signed research deals with the likes of Advaxis, Celgene Corp., and Innate Pharma to further accelerate and enhance the value of its immuno-therapy pipeline. That's one of the main reasons Astra looks like a great way to gain exposure to this emerging technology.

Agenus also looks like a good investing vehicle in the immuno-oncology space because its lead candidates are being advanced by bigger partners that are funding the trials. It also has one of the most extensive platforms for drug discovery in the business -- giving it multiple shots on goal, so to speak.

Given their extensive footprints in the high-growth immuno-oncology space, these two biopharmas are definitely worth a deeper dive.