Please ensure Javascript is enabled for purposes of website accessibility
Log In Help Join The Motley Fool
Free Article Join Over 1 Million Premium Members And Get More In-Depth Stock Guidance and Research
By Daniel B. Kline - Jun 8, 2015 at 6:20PM

The company faces some new competition with an attractive price point.

Netflix (NFLX 2.90%) has become the unquestioned champion of the digital streaming universe. The company has over 40 million paid members in the United States and another 19.3 million in the rest of the world.

With its combination of original programming and archive of movies and television shows, the service has changed how people consume video. The streaming giant has also done something that should make it the envy of all the companies trying to put the word "business" back into the music business: It gets people to pay.

Aside from a 30-day free trial period that requires customers to turn over their credit card information and opt out if they don't want to be billed, Netflix operates on a purely paid model. Whereas the major music players Pandora (P) and Spotify offer free, ad-supported versions of their services, the digital video streaming leader gets a subscription fee of between $7.99 and $9.99 from every user.

That has been a financial boon for the company (and it explains at least partially why video content is in a healthier business place than music). But it does leave Netflix vulnerable, at least in theory, to rivals which use an ad-supported model to give video away for free. 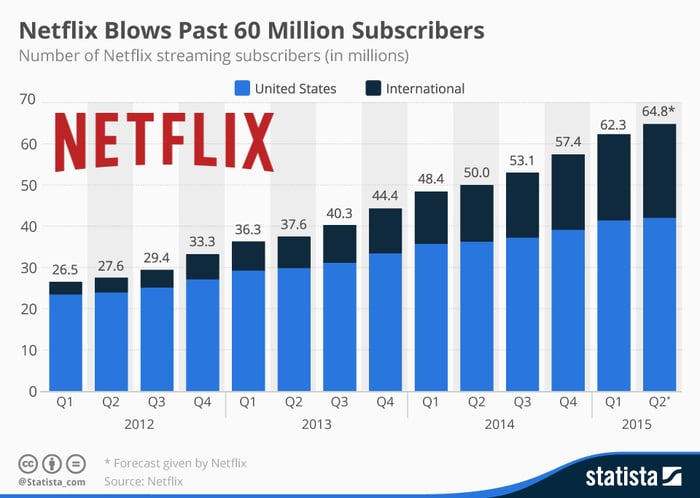 A number of competitors
While Netflix competes with Hulu and Amazon's Prime Instant Video in the subscription space, it also battles YouTube and other free content providers. In fact, when it comes to online time spent watching video, users actually appear to prefer free. YouTube actually accounts for 48% of all time people spend watching video online, according to a March, 2014 survey conducted by nScreenMedia, Netflix was second at 22% while Hulu ranked third with 8%.

What's clear is that just because people support YouTube does not mean they shun pay services. Netflix has had steady subscriber growth since its inception and YouTube has always been a competitor. That's likely because the two companies are offering different things. Netflix has long-form content -- TV shows and movies -- while YouTube specializes in short clips.

That has protected the paid streaming company's product, but does not prove it's invulnerable to competition. A new entree into the field as well as an enhanced effort from an existing, small rival could change that. 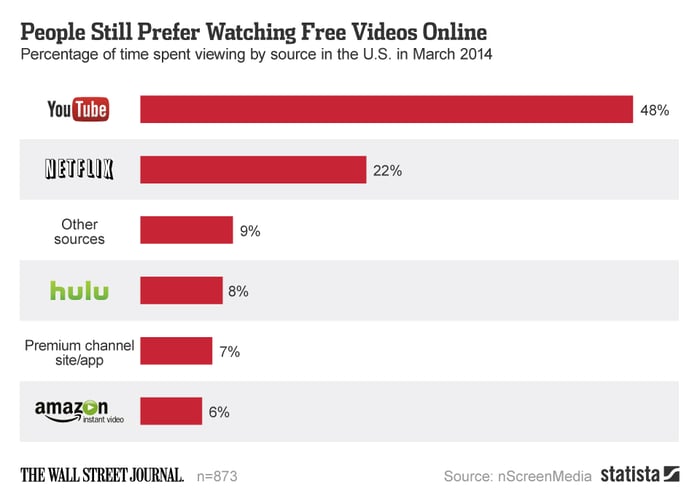 New competitors step up
Free video website Crackle, which is owned by Sony (SONY -0.11%), has always been a poor-man's Netflix. The site offers TV and movies as well as some originals, but it's generally older content and the originals are lower budget than what Netflix offers. That is changing at least a little bit as Crackle has stepped up its production efforts by producing a sequel to a popular movie.

Admittedly that movie is the low-brow Joe Dirt, but the release of Joe Dirt 2: A Beautiful Loser as a Crackle exclusive on July 16 shows the site is willing to dip its toes into Netflix's space. The movie joins Crackle's other high profile project, Jerry Seinfeld's Comedians in Cars Getting Coffee. Neither is House of Cards, but collectively they could lead to the Sony-owned company spending more on originals which could make it a more viable competitor to Netflix.

A second Netflix alternative has emerged recently as Hoopla Digital, a service which allows local libraries to digitally lend books has expanded into movies and television, has partnered with more than 700 U.S. libraries. The company explained its business in a press release:

Hoopla Digital partners with public libraries across North America to provide patrons with mobile and online access to more than 300,000 movies, music albums, TV shows and audiobooks. All content is available to patrons for instant streaming or downloading to their smartphones, tablets, or desktop browser with simple access through a library card.

Hoopla has a hodgepodge of content as well -- mostly older shows and movies -- as well as some new movies released through the service at the same time they appear on video on demand and even in limited theatrical runs.

It's not there yet
Netflix still has a major content advantage over these two rivals and a few others which are offering TV and movie programming for free. A sequel to a semipopular David Spade movie probably won't be enough to convince anyone to drop Netflix for Crackle any more than being able to stream Air Bud or scores of movies featuring stars you thought had left the business will for Hoopla users (good for Chris Klein though).

Where Netflix should be concerned is if audiences support efforts by these services to increase their output of originals or their ability to make creative deals for VOD releases. The existence of free players in its space forces Netflix to continue to spend on exclusive deals as well as originals.

These aren't real threats yet, but they could be, because free is an enticing price point. Of course, free plus a collection of old TV and movie titles which seem made up, won't get it done. But if these rivals can slowly step up their game, they could steal some Netflix users in the same way the streaming leader has taken some from cable.