Ford's long-term success hinges on many factors, but reviving Lincoln and a focus on mobility will be two critical points. Here's why.

Former Ford Motor Co. ( F -3.67% ) CEO Alan Mulally did some pretty amazing things while in control of the automaker. Ford posted total losses north of $30 billion from 2006 (the year Mulally took charge) to 2008, yet avoided joining its Detroit peers in bankruptcy, and the company has since turned in some of its best years of profitability.

But perhaps Mulally's most important magic trick was to seamlessly hand off control of the business to current CEO Mark Fields (who, of course, should also get much credit for the flawless transition). With Fields' one-year anniversary as Ford's leader coming up on July 1, what's on his agenda to propel the automaker forward?

To-do list
While Fields has a long checklist of things Ford needs to achieve, two particular topics will become increasingly important for the company's long-term success: reviving the Lincoln brand and adapting to changes in the industry.

Lincoln, Ford's struggling luxury brand, remains a focus for Fields and his team. "From a profitability standpoint and from a presence standpoint, it's really important for us to be part of [the luxury market] and to be there when Ford customers want to step up," Fields said in March, according to Automotive News. "Lincoln is really core to our profitable growth plan going forward."

It is becoming critical for global automakers to have a successful luxury lineup to boost revenue and profits. Consider that while the global luxury market only represents about 10% of total new vehicle sales, it generates roughly one-third of industrywide profits.

Reviving Lincoln will play a critical role in the company's ability to generate better profits abroad, where larger SUVs and trucks sell in far fewer numbers than in the U.S., as well as in increasing the company's top-line revenue and operating margin.

Meanwhile, Fields must also keep his eye on new opportunities as the auto industry evolves. 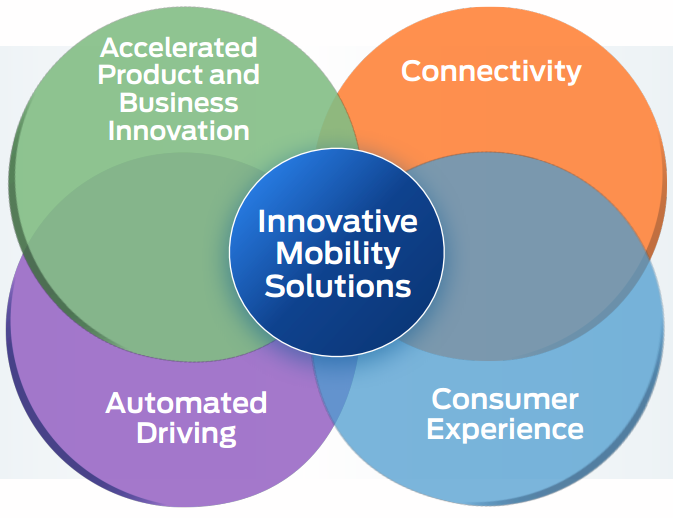 Mobility and innovation
The automotive industry is evolving, and Fields recognizes that Ford will have to adapt the way it approaches business to be successful over the next few decades. One step the company is taking is kicking off 25 global mobility experiments -- designed to test technology and innovative products to improve Ford's vehicle connectivity, mobility, and business -- to find new revenue streams or make the consumer experience simpler and more enjoyable.

As an example, Ford is using a fleet of Focus electric vehicles and Fiestas with EcoBoost engines in London for car-sharing. The research is exploring how to optimize the service using pay-by-minute and one-way trips across the city -- all through a mobile app. It's not crazy to think that in the years ahead Ford could use a fleet of Lincoln Continentals in a ride-sharing business that would rival Uber and Lyft.

There has also been a lot of chatter in the market regarding fully autonomous vehicles, and Ford plans to be a part of that.

"We're already manufacturing and selling semi-autonomous vehicles that use software and sensors to steer into both parallel and perpendicular parking spaces, adjust speed based on traffic flow or apply the brakes in an emergency," said Raj Nair, Ford chief technical officer and group vice president of global product development, in a press release. "There will be a Ford autonomous vehicle in the future, and we take putting one on the road very seriously."

Investors should not expect Ford's mobility experiments to have an immediate impact on the company's bottom line. Rather, at least for now, expect the experiments to improve vehicle technology features, such as better speech recognition technology or a better mobile app that enables drivers to find the nearest available parking spot. Further down the road, though, these experiments will help pave the way for how Ford adapts its business model amid such a technology- and connectivity-driven shift in the automotive industry.

As the automotive industry evolves, it's clearly on Fields' to-do list to research how Ford can best adapt to the changing environment. That, along with reviving Lincoln, will be crucial for Ford over the long term.