If you're a shareholder of Prospect Capital Corporation (NASDAQ:PSEC), you've received notice electronically or by snail mail that Prospect might start buying back its stock. But I wouldn't count on that if I were you.

You see, Prospect has to notify shareholders six months before a stock repurchase. Its last notice was in its September proxy filing, so it couldn't buy back stock now without notifying you. It has an existing repurchase authorization that was first approved in August 2011, at which time the Board of Directors decided that buying up to $100 million of stock might be a good idea.

Its managers also thought this was a good idea in every single year since 2011, which is why it reminded shareholders that it could repurchase shares in every single proxy filing since then.

Yet however good an idea it may be, as of March 31 -- nearly four years later -- Prospect Capital hasn't repurchased a single share under this program.

This time might be different, but probably not
If you go back through Prospect Capital's SEC filings, you'll find some interesting things, not the least of which is its history of issuing or repurchasing stock. You'll find that Prospect Capital has a bit of a bad habit: It has issued much more stock below book value than it has ever bought back.

I can say that confidently because, as of March 31, it has issued more than 70 million shares below book value and repurchased exactly zero shares under the same terms. When its shares trade under book value, Prospect Capital is much more likely to sell shares than to buy them.

I charted Prospect's historical stock issuance and repurchases at prices under net asset value, or NAV, because it really shows how ridiculous this practice is. Keep in mind that the Y-axis is in terms of millions of shares, not millions of dollars; these 70 million shares, at the current price, are worth more than a half-billion dollars. 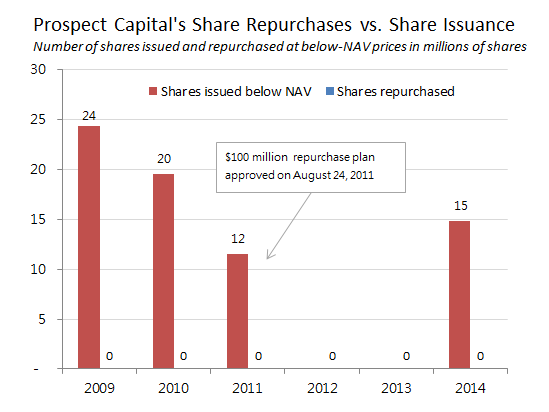 Now, to put these numbers in perspective, Prospect Capital had roughly 358.5 million shares outstanding as of March 31. Therefore roughly 20% of all its outstanding shares exist because they were sold at a price under NAV (that is, book value) per share.

In other words, 20% of its outstanding shares were sold at a discount that made its existing shareholders poorer for the benefit of new shareholders and the management team -- the external manager is paid handsomely based on a percentage of assets and returns, regardless of book-value destruction.

And there's still one more important detail: The preceding figures don't include shares Prospect Capital issued to shareholders as part of its dividend reinvestment plan, or DRIP. During the quarter ended March 31, Prospect issued 441,320 shares at prices under NAV to pay dividends to its loyal DRIP investors.

I think Prospect Capital should be buying back stock. If each share truly represents assets worth $10.30, then paying $7.80 per share is an absolute bargain. It's certainly a better deal than making yet another add-on loan to Capstone Logistics at the comparatively low return of 8.75% per year, buying an ad in Barron's, hosting webinars, or hiring Skadden Arps to get a (potentially dilutive) rights offering pushed through the SEC.

You see, history can be a reliable guide for the future, and history says Prospect Capital doesn't repurchase stock. Rather, it shows that Prospect Capital prefers to issue stock when it's cheap and then pretend it might do investors a favor by repurchasing stock at some point in the future.

Just check the scoreboard. Share issuance under NAV: over 70 million. Repurchases under NAV: 0.