When investors consider adding automotive industry stocks to their portfolio, they often only scratch the surface, looking into manufacturers such as Ford Motor Company, General Motors, and Toyota Motors. Perhaps some investors take it a step further and look at companies creating new ways to purchase vehicles, such as TrueCar or CarMax.

While those companies offer interesting investments, there are plenty of overlooked companies in the automotive industry that are worth watching, especially if they can capitalize on future trends. Let's dig into safety regulation and the rise of luxury vehicle sales, two growing trends in the industry, and see which companies stand to benefit.

Total recall
When all was said and done, 2014 went into the record books as the worst year for vehicle recalls in the U.S., ever. Carmakers recalled a ridiculous 64 million vehicles in the U.S. last year, more than double the previous record set back in 2004. The recent onslaught of recalls means there will be more focus on improving safety technology and features in vehicles.

Autoliv has operations in 28 countries, with about 80 facilities globally. It develops and manufactures safety products such as airbags, seatbelts, steering wheels, passive and active electronic safety systems, child seats, anti-whiplash systems and pedestrian protection systems, and sells to all leading car manufacturers worldwide. The company claims its safety products save over 30,000 lives and prevent or reduce 300,000 severe injuries annually.

Autoliv continues to innovate, and was the first company to introduce side-impact air bags -- and it continues to pour about 6% of its sales revenue into research and development. Furthermore, Autoliv owns roughly 7% of all automotive safety patents, according to Morningstar.com.

In the near term, Autoliv will benefit from growing safety regulations in the U.S., but there's a global trend to think about as well. The U.S. leads the world with roughly $350 of safety content per vehicle, but as more consumers in emerging markets become middle-class, demand for vehicles -- and for safer vehicles -- will increase as well. Consider that two markets expected to post accelerated auto sales growth, China and India, respectively only spend about $200 and $60 on safety content per vehicle.

An increasing focus on safety isn't a new trend, and investors have already hopped aboard the Autoliv bandwagon, pushing its price to a slight premium; it trades at forward price-to-earnings and price-to-cash flow ratios of about 16.2 and 18, respectively. However, as safety regulations rise, Autoliv should be able to capitalize on the trend for investors.

Show me the money!
It's become clear for those investing in global manufacturers, such as Ford and General Motors, that having a successful luxury brand is key to increasing historically weak margins in such a capital-intensive and competitive industry. In fact, while luxury vehicles only represent roughly 10% of the global automotive market, the segment is estimated to generate one-third of the profits.

As automakers continue to focus on designing a successful luxury lineup, one company that stands to benefit is Lear Corp. (LEA -1.02%). That's because two things that go into a great luxury interior are seating and electronics, segments where Lear Corp has a strong global position and low-cost footprint. Lear is the world leader in providing luxury and performance seating for premium brands, such as Audi, BMW, Cadillac, Ferrari, Jaguar, Lamborghini, Land Rover, Maserati, Porsche, and others.

While seating drives the majority of Lear's profits, there is growth to be had for its electrical business. More and more consumers are demanding technological features and electrical content than ever before. Also, as fuel economy continues to be a focal point for consumers and automakers alike, more sophisticated electronic controls, high-power wiring, and power-management devices are required -- all products Lear can deliver on.

As you can see in the graph, Lear's compound annual growth in its seating and electronics businesses has dramatically outperformed the entire industry's production increase.

Furthermore, another trend that will benefit Lear is the continued consolidation of vehicle platforms. Major automakers reuse an increasing number of parts among vehicles as they are sold globally, rather than design different vehicles for each region. Ford provides a great example: The company had 27 global platforms in 2007, and will have consolidated that to only nine by next year.

Lear stands to benefit from this as well, thanks to its global footprint, with 235 facilities in 34 countries and more than 80% of those component facilities located in low-cost countries. That scale creates a cost advantage that should ensure Lear receives plenty of business from automakers looking to consolidate vehicle platforms to lower costs of their own.

In fact, Lear has been doing very well in recent years. From 2010 to 2014, Lear's total shareholder return checked in at 203%, higher than both its peer average of 167% and the S&P 500's 105%. Over that same time period, Lear posted five consecutive years of higher sales and adjusted earnings-per-share, generated over $2 billion in free cash flow, and repurchased 29% of the company's outstanding shares.

Despite Lear's strong performance over the past five years and its bright future in meeting the demand for premium vehicle electronics, safety, and seating, it still trades at a fairly undervalued price. 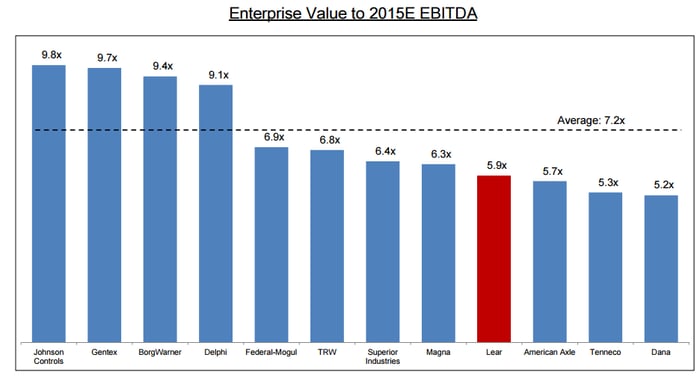