Chemicals are everywhere in our world today, but the idea of investing in chemical companies probably sounds boring to most investors. However, just because it's boring doesn't mean investors can't make money, especially when the industry in question is also essential to the economy, like the U.S. chemical industry.

According to the American Chemistry Council, the U.S. chemical industry is worth more than $800 billion today and supports nearly 25% of the economy's GDP. Since chemicals are high-value-added products that form the basic raw material for most goods, more than 96% of the total goods manufactured in the U.S. are touched by chemicals in some way. Needless to say, companies that are involved in the chemicals business have high  growth potential as the economy continues to grow over time, and hence present a great opportunity for long-term investors.

So, which chemical company is worth your money? While there are several players in the industry that deal in chemical products ranging from  basic petrochemicals and plastics to fertilizers and paints, one company that stands out from the crowd is Dow Chemical (NYSE:DOW).

Dow Chemical is the leading chemical company in the U.S., but that's not why I consider it the best possible investment opportunity in the industry. The key to survival in a cyclical business lies in diversity and innovation. Dow Chemical scores high in both areas.

Regarding  diversity, here's a graphic that shows Dow's product portfolio and the share of each business in the company's total sales in 2014.

As you may have guessed by now, Dow's products serve several key sectors and industries, including energy, agriculture, water, electronics, construction, packaging, and automotive. It's this diversity that has largely helped the company deliver solid growth in its bottom line over the years. 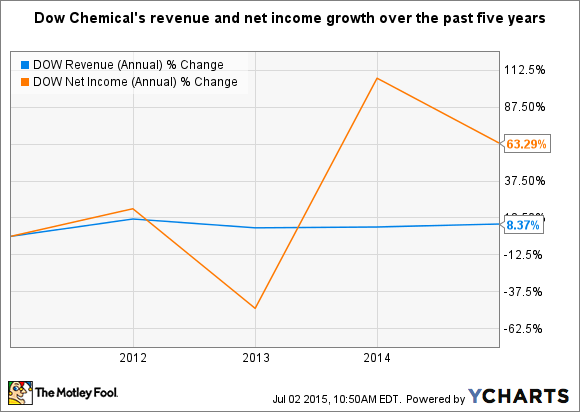 Dow Chemical's latest quarter  marked the 10th straight quarter when it reported higher operating earnings. The company now boasts an operating margin of 10% compared to just about 5% during the beginning of 2014. Dow's margins should expand further in the years to come, given its greater focus on high-margin products even as it sheds non-core operations. For perspective, Dow expects to generate divestiture proceeds worth nearly $11 billion by mid-next year versus its targeted $7 billion-$8.5 billion.

Dow Chemical's growth plans are equally impressive. Consider Sadara -- the joint venture between Dow and Saudi Aramco -- that's setting up the world's largest petrochemical facility at a total cost of $20 billion. Fellow Fool Maxx Chatsko recently gave great insight into what the project means for Dow. It's exciting to know that 94% of Sadara construction is already complete, with production on track to come online this year. This huge project alone could turn out to be Dow's trump card in the years to come. 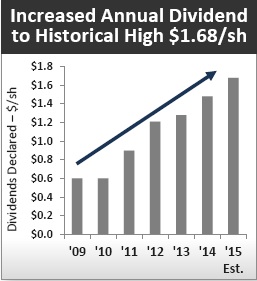 Dow Chemical's expansion plans and efforts to streamline operations should give a big boost to its already strong balance sheet and shareholder returns. The company is flush with cash, holding nearly $5.6 billion in cash and equivalents as the end of 2014, and generating free cash flow worth nearly $3.4 billion over the past twelve months.

Shareholders are getting a good chunk of that money: Dow announced a fresh share repurchase program worth $5 billion after buying back shares worth $4.5 billion last year. That's not all. The company increased its quarterly dividend twice in 2014, more than doubling its annual dividend since 2009.

Foolish takeaway
For long term investors, Dow Chemical measures up: solid growth catalysts, great operational performance, strong balance sheet, and handsome shareholder returns. With shares trading at under 16 times earnings and the stock yielding 3.2%, I think Dow Chemical offers excellent value for long-term investors right now. As the company grows leaner and stronger, it should be able to weather slow-growth periods better and continue to expand its margins. For investors, that should be enough to put the stock on their radar.