Get your caution tape ready, because the situation in Greece continues to get uglier. 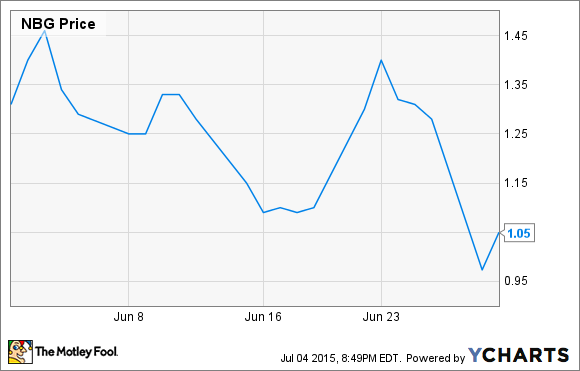 What: According to data from S&P Capital IQ, shares of National Bank of Greece (NYSE: NBG), Greece's largest lender, were hammered in June to the tune of a 20% decline caused by deteriorating bailout talks between Greece and European leaders that has led to the temporary closure of Greek banks.

So what: Greece is in what appears to be a true death spiral. Its unemployment rate continues to dance above 25%, and its debt-to-GDP ratio is at a mind-blowing 180%.

Last month Greece became the first developed country to default on the International Monetary Fund. It missed a payment of $1.8 billion. Furthermore, all talks between Prime Minister Alexis Tsipras of Greece and global EU leaders have failed to produce an amicable solution for months.

Greece's creditors would like the indebted country to adhere to austerity measures, such as cutting pensions and boosting taxes, in exchange for releasing a roughly $8 billion bailout allotment. Thus far Greece's Prime Minister hasn't budged on his anti-austerity stance. In turn, the European Central Bank and IMF have dug in their feet and promised that it will not issue emergency loans to prop up Greece's banks. In response to the IMF payment default and negotiations going nowhere, Tsipras announced the closure of Greece's banks for a full week, as well as a 60 euro withdrawal restriction per day for Greek citizens. The concern is Greek citizens may make a run on the banks' remaining cash, which would only expound the country's problems.

Now what: Long story short: the National Bank of Greece's long-term survival is in question.

If Greece can stay within the Eurozone and somehow work out a deal, it'll likely only buy more time before it runs into additional problems down the road. It's worth noting that we have been here a few times before with Greece, and chances are that history will repeat itself. Plus, higher taxes and cut pensions aren't exactly going to stimulate the Greek economy and help the National Bank of Greece. If Greece leaves the Eurozone, it'll be immediately devastating to Greece's economy and its banks, but it could offer a chance for the Greek government to press the reset button, so to speak. To be clear, neither situation is favorable for investors in National Bank of Greece.

What does the future hold? I personally see ongoing operating losses for the National Bank of Greece, perhaps some very volatile trading considering the emotions surrounding the Greek debt crisis, and a good chance of a lower stock price. With few, if any, redeeming qualities, this is a stock I'd suggest avoiding at all costs.

Why National Bank of Greece (ADR) Rocketed 43% Higher in February

Can This Greek Stock Power Up Your Portfolio?

After Multibagger Returns With Bank of Ireland, Which Investors Remain and Where Are They Going?

Why Are European Banks Shedding Trillions in Assets?