What: Shares of Dean Foods Co (OTC:DF) were turning sour last month, falling 12% as the dairy producer got dinged with a downgrade from Morgan Stanley and falling milk prices. 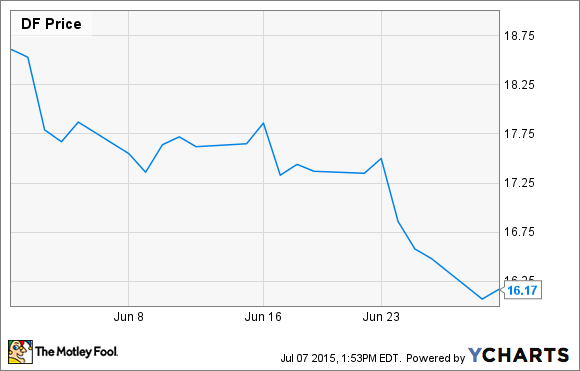 So what: The investment bank lowered its rating on Dean to equal weight on valuation concerns, and also said it saw milk prices moving higher in the second half of the year, which would favor the nation's leading milk producer. Shares fell 4% on June 3, the day Morgan Stanley released its report, and declined further at the end of the month as the overall market dropped and dairy prices fell.

Prior to June, the stock had been on a roll, jumping nearly 15% in May on a strong first-quarter earnings report as the company posted earnings per share of $0.24, ahead of estimates at $0.18, and launched its new DairyPure brand, which it calls "the first and largest fresh, national white milk brand."

Now what: Morgan Stanley's valuation-based call seems to be an accurate one. With little growth ahead of it and a P/E of 18 based on the current year, it seems like the stock price has been stretched until any signs of improving performance emerge.

Milk consumption has been declining on a per-capita basis since the 1970s as the dairy staple has become increasingly unpopular, and milk sales by the dollar are down since the recession. Non-dairy alternatives like soy milk and almond milk have taken some share while American as a whole have simply switched to other beverages like coffee, juice, sports drinks, energy drinks, and water.

This isn't a new problem for Dean, but it's a persistent one, and it likely means that any profit growth will come out of trimming costs, a rise in volatile milk prices, or perhaps the addition of value-added products such as DairyPure. Analysts are expecting sales growth of just 1.5% next year, and that pace is unlikely to improve beyond that.

For Dean investors, that means the rocky road the stock has been on should continue as the price will fluctuate with the commodity market and its uncertain performance. With little growth potential and a valuation that's even with the broader market, it's hard to see a significant upside here.