PepsiCo (NASDAQ:PEP) reported its second-quarter earnings Thursday, posting revenue of $15.9 billion, a 6% decrease from the prior-year quarter. Net income was virtually unchanged from last year's second quarter at $1.98 billion. However, due to a lower count of shares outstanding due to PepsiCo's consistent share repurchases, earnings per share increased more than 3%, from $1.29 to $1.33 per diluted share.

Today's earnings demonstrated that while PepsiCo probably can't resolve its lack of top-line revenue growth any time soon, it will focus on making its operations as efficient as possible, returning capital to shareholders via increased dividends and share buybacks. 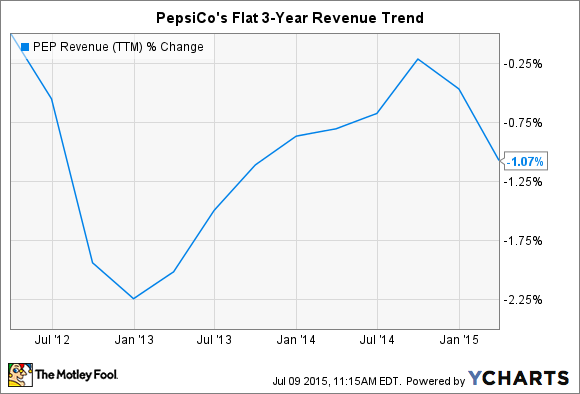 As this trailing-twelve month revenue chart from January 2012 forward indicates, PepsiCo is likely headed for a fourth year of flat-to-declining revenue. Various challenges, from the decline in popularity of sugary carbonated soft drinks and U.S. dollar strength to a slowing European economy, have stymied the $67 billion beverage and snack conglomerate's efforts to lift overall sales.

However, the company's executive team has employed a compensatory strategy of improving productivity, cutting costs, and managing margins. Take today's report, for example. The second quarter's 6% decline in revenue was offset by a reduction in cost of sales by 8%, and a similar trimming of general and administrative expenses by 6%. Thus, the top-line decline of $971 million was absorbed by expense management, along with some help from commodity price weakness, leading to flat rather than negative profit versus the prior year.

The drive to sculpt a leaner, higher-margin business has become something of a mission at Pepsi, most notably expressed in the company's ambitious 5 year, $5 billion productivity plan. PepsiCo CEO Indra Nooyi reiterated today that the organization was on track to achieve this goal by 2019.

Frito-Lay is growing in importance for PepsiCo
Frito-Lay North America (FLNA), the company's primary snacks division, produced another admirable quarter, expanding revenue by 2% to $3.5 billion, and operating profit by 7% to $1.0 billion.

It's difficult to overstate the importance of FLNA to overall results. Since total revenue is in a multi-year decline, and FLNA is one of the few divisions to consistently increase revenue, its percentage contribution to both the top and bottom line is expanding each quarter. At present, FLNA accounts for 22% of revenue and one-third of the company's operating profit.

While FLNA is still smaller than PepsiCo's largest segment, PepsiCo Americas Beverages (PAB), which garnered $5.3 billion of revenue during the quarter, it's a more profitable business. PAB achieved only $903 million in operating profit during the quarter, though it recorded nearly $2 billion more in sales. FLNA is proving to be an important complement to the beverage segment's results.

Organic growth looks impressive, with a caveat
Today's press release highlighted what appears to be vigorous organic growth of 5.1% during the quarter. "Organic growth" is a way for companies to discuss sales growth after removing the effects of foreign currency translations.

PepsiCo's second-quarter overall organic growth rate wasn't uniform among business segments; in fact, it was primarily driven by a 23% pop in the company's Latin American Foods (LAF) segment. And of this 23%, only 3% was due to volume growth. The remainder derived from a 20% increase in pricing. In recent quarters, management has indicated that part of its strategy for dealing with highly inflationary economies like Venezuela and Argentina is to raise prices in tandem with general consumer goods inflation.

Thus, much of PepsiCo's organic growth can be traced to its efforts to hold the line against inflation in a handful of deteriorating economies. Without this boost from the LAF segment, the company's overall organic rate would not have been nearly as high. For example, in contrast to Latin America, FLNA and PAB both posted organic growth rates of 3%, and PepsiCo Europe gained only 0.5% during the quarter.

Another quarter of robust cash flow
A final noteworthy item from PepsiCo's earnings report is the company's continued ample operating cash flow. PepsiCo produced $2.8 billion of operating cash flow during the quarter, bringing its total so far this year to $5.4 billion. The company plans to return a total of between $8.5 billion and $9 billion to shareholders this year in the form of $4 billion in dividends and $4.5 billion to $5 billion in share repurchases. Part of PepsiCo's focus on productivity and cost-control has manifested itself in this strong cash flow. Finally finding some momentum on revenue would amplify the benefits shareholders are enjoying.