What: Shares of United States Steel Corporation (NYSE:X) have fallen 21% since the beginning of June, and there's really no end in sight to the drop. Uncertainty in China has overwhelmed the commodity market and everything from iron ore to steel has dropped as a result. That means profits could be worse than anyone expected this year, and investors are getting out early. 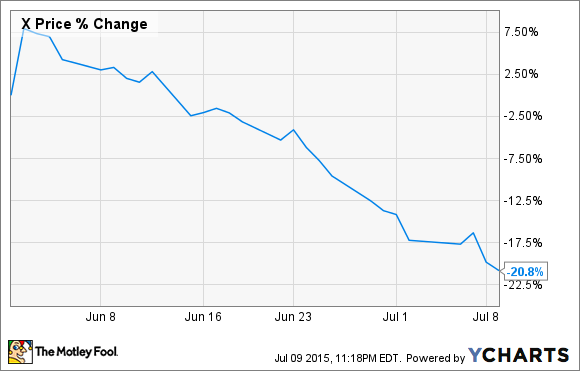 So what: When it comes to the steel business everything revolves around China these days. If the Chinese economy is booming and demand is going up everyone is happy; if China is struggling or its steel manufacturers are dumping product on the world market, steel stocks struggle.

The past month has been a combination of everything bad happening at once for United States Steel. Steel imports rose from 15% of the market in 2013 to 22% in 2014 on the back of Chinese exports and a strong dollar. And fear that the Chinese economy is slowing, bolstered by this week's market crash, has made its way to commodity markets. Steel trades at a six year low, and it's no surprise that United States Steel's stock is at a 52-week low as well.

Now what: Analysts weren't expecting United States Steel to make money in 2015, but the losses may now be far worse than the consensus $0.52 loss Wall Street is expecting. And there doesn't seem to be much optimism on the horizon. China's economy has to slow down eventually, and this week's market meltdown may be a sign that the government's interventions are just making the bubble worse. And there doesn't appear to be any less competition to deal with going forward. It could be a rough year for United States Steel, and this summer is giving investors more questions than answers about its future.