Electric-car maker Tesla Motors (NASDAQ:TSLA) doesn't spend a dime on advertising. Yet sales are soaring. In Tesla's first quarter of 2015, automotive revenue was up 52% from the year-ago quarter, hitting a record $893 million.

What's Tesla's trick to constantly driving demand growth? Instead of forking out the cash for advertisements, Tesla relies heavily on test drives and word-of-mouth marketing -- two tactics playing out exceptionally well for the company.

But skeptics had their doubts about Tesla's ability to continue to increase sales of its $75,000-plus-priced car in 2015. Chances are, however, these skeptics hadn't yet driven the company's October-launched P85D. The new flagship Model S put the line on a whole different level, giving word-of-mouth marketing an additional boost.

To really grasp all the hype surrounding Tesla's P85D and comprehend the potential of the updated Model S line, I spent three days with a fully loaded version of the car. In the video below, I share why the car made me more confident that Tesla can reach its ambitious sales target for the year. (A full transcript follows.)

It's a clear statement that electric cars are here to stay. It's electric-car maker Tesla Motors' halo vehicle -- all of the company's best technology packed into a single car. The fully electric P85D Model S sets a new precedent. And best of all for Tesla, the vehicle looks poised to serve its purpose in helping the company continue to drive demand higher for its vehicles, making evangelists every time the accelerator pedal is pushed to the floor.

After spending three days with Tesla's P85D, I have little doubt the California-based company can hit its ambitious sales target for the entire Model S line this year.

But let's rewind. Why is Tesla's flagship vehicle so important to Tesla's business?

When Tesla CEO Elon Musk said he believed sales of Model S would increase 50% this year, there were skeptics. After all, the 31,655 units shipped in 2014 was an achievement in its own right. Up 41% from deliveries the year before, Tesla's 2014 Model S sales put it among the best-selling cars in its pricey category in many of Tesla's key markets. Increasing sales 50% in 2015, therefore, would mean Model S would become the undisputed leader among high-end luxury sedans in a handful of the company's markets. Could Tesla really pull it off? After all, we're talking a fully electric vehicle -- a complete paradigm shift from what the driving world has become accustomed to.

But anyone doubting Tesla's ability to ramp deliveries further in 2015 probably hasn't yet taken a ride in the company's newest version of the Model S: the October 2014-launched 691 hp P85D -- Tesla's pride and joy.

To fully understand the potential of Tesla's line of Model S vehicles, I drove a fully loaded version of the flagship Model S for three days.

Vehicle highlights
It's fast. Insanely fast. The P85D's wild and instant torque poses a direct threat to the long-held notion that a roaring, gas-guzzling motor is necessary for achieving sporty, muscle status.

Shaving off more than a second from the already-fast P85's zero-to-60 time of 4.2 seconds, the P85D hits 60 miles per hour in just 3.1 seconds, making it the fastest-accelerating four-door production car of all time. The zero-to-30 time? A mind-boggling one and one-third seconds -- a time Consumer Reports calls "unheard of" for any street-legal car.

Combining the vehicle's low center of gravity (thanks to the battery's position across the floor of the vehicle and between the axles, distributed weight (due to the motors attached to the front and rear axles), and the electric motor's ability to shift power from front to rear at the millisecond level, the P85D boasts incredible all-wheel-drive handling.

Tesla has taken major steps toward a semi-autonomous experience. Alongside the launch of dual motor, Tesla played a bit of catch-up with its autopilot features when it announced P85D. Tesla introduced many of the same safety and convenience features found in a handful of other new vehicles, such as blind-spot warning and self-parking, plus a few new features, including the ability to "summon" the vehicle on a private property with a command from a smartphone, and hand- and foot-free lane changes on the highway -- initiated by nothing more than a tap of the blinker. Notably, not all of the autopilot features Musk mentioned when the dual-motor and autopilot platforms were first unveiled have made it to Tesla vehicles yet. But, over time, Tesla promises to zap these abilities to its October 2014 and later Model S fleet through over-the-air software updates.

Then there's Tesla's new, next-generation seats, which come at an extra price but offer buyers used to the high-end luxury standards set by Tesla's competitors a comparable sitting experience.

Tesla's P85D puts the Model S line on a whole different level. It even leaves its previous flagship P85 in the dust. With improved handling, speed, interior, and safety, the P85D offers buyers more bang for their buck than could be had with Tesla's P85.

Sure, the P85D is expensive. Priced between $105,000 and $130,000, depending on order specs, most people couldn't even think of forking out the cash to own a P85D for themselves. But despite its high price tag, the P85D's importance to Tesla's business will likely be enduring. It's the company's halo car. With performance rivaling sports cars costing hundreds of thousands of dollars and arguably some of the best all-wheel-drive handling available, the P85D is Tesla's ultimate marketing tool.

Fortunately, Tesla's dual-motor and autopilot systems aren't limited to its flagship P85D. Tesla's autopilot hardware comes standard with every Model S, and even Tesla's entry-level Model S comes with dual motor. Yes, Tesla's lower-priced versions of Model S won't sport the same impressive performance, but they're fast enough to offer interested buyers with a smaller budget a lesser-yet-still-impressive version of the P85D. Tesla's entry-level 70D has a driving range of 240 miles, 329 hp, and a zero-to-60 speed of 5.2 seconds. Of course, we're still talking an expensive car: The 70D starts at $75,000.

Going into this year, Tesla was counting on the P85D to help the company boost demand for its Model S. So far, the plan seems to be working. By the beginning of the year, P85D availability for test drives across Tesla's global markets was sparse. Tesla didn't even deliver its first P85D in Europe until February of this year. But as owners take delivery of their P85Ds and Tesla's markets are equipped with the flagship vehicle for test drives, the company is relying on the halo vehicle as a key driver of sales.

With two quarters for 2015 already passed, Tesla is on track with its plan to increase Model S sales this year by 50%. Model S deliveries were up 56% from the year-ago quarter in Q1 and 52% in Q2. 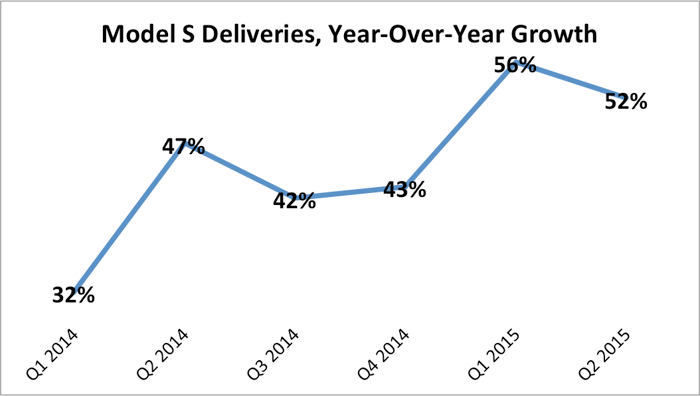 It's no wonder Tesla is ramping up its P85D test-drive tours across its markets. With every insane launch, Tesla's halo car strategy is doing exactly what Tesla wants it to: spread the word and create customers.

It's probably safe to say that anyone doubting Tesla's potential to grow Model S sales by 50% in 2015 hasn't driven the company's P85D. While I may have taken a three-day joy ride, it only takes three minutes in the vehicle for Tesla to convince drivers that the electric-car maker is onto something good.