When it comes to partnerships, investors learn to love them for the distributions -- the dividend. But the distributions paid by private equity companies tend to be lumpier. After all, Blackstone Group's (NYSE:BX) routine management fees mostly keep the lights on; less-predictable performance fees are the icing on the cake that sends it into profitability.

But "lumpy" may mischaracterize Blackstone's future payouts. The company ended the latest quarter with $4.9 billion of "net accrued performance fees," equal to $4.17 per share.

Its executives like to think of its accrued performance fees as a sort of receivable; when Blackstone realizes profits earned for its fund investors, it'll pay that sum back out to its shareholders. As for timing, realizing these profits is at Blackstone's discretion, though it has to act as a fiduciary to its clients and work to maximize their profits first and foremost. 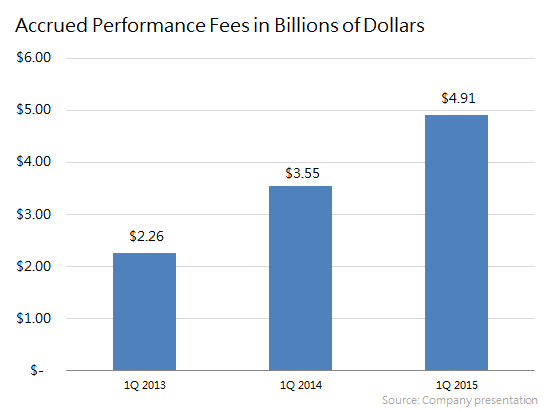 What's driving its profitability
Regardless of where an investor might think we are in the economic cycle, it's clear that valuations are up across the board. The net result is that Blackstone is accruing more and more performance fees, which will eventually be returned to shareholders as it exits investments and books gains for its clients.

On its most recent conference call, Blackstone CFO Laurence Tosi noted that $151 billion of the company's assets under management are currently earning performance fees, an increase of 30% over the prior year. One would hope and expect this to only continue growing. Tosi called this a valuable "compounding effect" that is inherent in the fee-driven business of managing other peoples' money.

When Blackstone reports earnings on Thursday, the good news should continue after a stellar first quarter kicking off 2015. Blackstone was busy fundraising for another mega fund this quarter, gathering a reported $17 billion for BCP VII, one of the largest private equity funds raised since the financial crisis. This follows a beastly $15.8 billion raised for its real estate funds in the first quarter, some of which was almost immediately deployed in a $14 billion deal for some of General Electric's real estate assets.

And although quarterly performance means little in the grand scheme of things, it's hard not to be upbeat about Blackstone's recent fundraising trends and its ability to collect fee-earning assets under management. It's rapidly replacing capital to build new funds as older funds wind down.

As merger and acquisition activity heats up in the public markets, one suspects that Blackstone's older "inventory" of smaller privately held assets might soon lead to big realizations and beefier distributions as time goes on. With $4.17 per share in the kitty in the form of accrued fees, the next few quarters could be particularly lucrative for its investors.