Advanced Micro Devices (NASDAQ:AMD) recently announced a few graphics cards based on its new Fiji graphics processor design. These Fiji-based designs allow AMD to compete at the $549 and $649 price-points that rival graphics processor vendor, NVIDIA (NASDAQ:NVDA), has dominated for quite some time.

Although some view such shortages as a good thing (i.e., demand outstripping supply), such a shortage actually seems to be quite negative for AMD. Let me explain.

The first issue here is that the Radeon R9 Fury and the higher-end Radeon R9 Fury X aren't by any means "clean kills" in terms of performance, power consumption, or even outright value relative to the NVIDIA competition.

The R9 Fury X, AMD's cream-of-the-crop, is generally believed to be slightly slower than NVIDIA's GeForce GTX 980 Ti offered at the same price point. The $549 Fury, according to TechPowerUp, delivers more performance than the $499 GeForce GTX 980, but loses in terms of performance-per-watt and performance-per-dollar at high-end resolutions (2560-by-1440 and 3840-by-2160).

In addition to a value proposition that isn't so clear, the cards are also reportedly very difficult to find.

Indeed, when I went to Newegg.com (one of the most popular online retailers for computer gear) in search of a Radeon R9 Fury X, I saw the following: 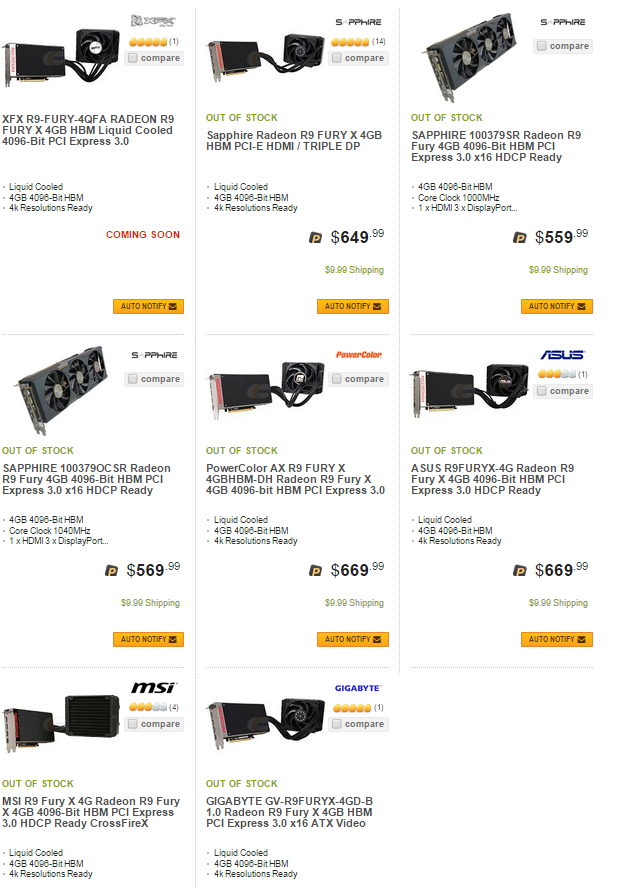 To the gamer who wants to buy a Radeon R9 Fury or R9 Fury X today, I say "good luck."

In contrast, I seem to have no issue finding all sort of GeForce GTX 980 cards.  There are also plenty of such cards that are designed to run at faster speeds than what NVIDIA runs them at out of the factory, which probably helps close the performance gap between the stock GTX 980 and the R9 Fury.

The same applies to the GeForce GTX 980 Ti; there seem to be plenty of these cards in stock from a variety of vendors. There even seem to be a number of models that run at speeds higher than what NVIDIA specifies them at, which should help widen the performance gap between NVIDIA's best and AMD's best.

AMD needs to improve supply ASAP
NVIDIA seems to be in the driver's seat. At the $649-and-up price points, NVIDIA's offerings seem to be widely available and deliver better performance to boot. Against the regular Fury, it seems that there are plenty of GTX 980 models available that would arguably be more attractive to buyers, especially as many factory overclocked versions seem to retail for under $549.

Although having product in greater supply won't fundamentally change the value proposition provided by the Radeon R9 Fury/Fury X, AMD at the very least needs to make sure that cards are available so that users who need to upgrade now (especially those who have been waiting for both AMD and NVIDIA to launch their respective chips) and have a slight preference for AMD will not be swayed by an NVIDIA offering.