It wasn't so long ago that a foreign automaker like Ford Motor Company (NYSE:F) could do no wrong in China, and that checking in with a year-over-year double-digit sales increase was just another sales day. It was simple: As China's middle class surged in numbers and in wealth, sales of new vehicles followed. 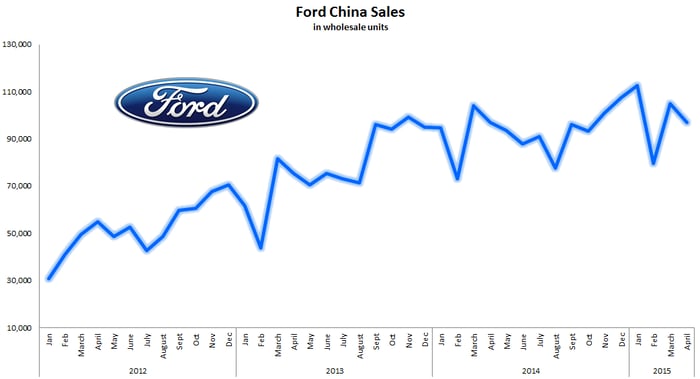 Despite impressive growth, there was still so much untapped potential. Consider that just a couple of years ago, China had roughly 100 cars for every 1,000 people. In comparison, U.S. and Europe had about 800 and 600 vehicles per 1,000 people, respectively.

Fast-forward to today: Gone are Ford's ridiculous year-over-year sales gains in the region. Ford's sales in China increased a meager 0.1% in the first half of 2015, compared to the same period a year ago. If that trend continues, it will become a big problem for investors who were hoping Ford's operations in China would become a second source of significant revenues and profits.

Let's dig into the factors behind Ford's recent struggles in the world's largest automotive market.

What's going on?
Unfortunately for investors of companies banking on China for growth, there seem to be multiple problems in the region. One problem is that China's stock market recently lost roughly $3.2 trillion in value, according to Cui Dongshu, secretary-general of China's Passenger Car Association, as told to Bloomberg. As consumers' investments turned into huge losses, more and more car buyers in China are canceling or delaying their purchases. "The stock market is going down too fast, this is wealth destruction," Song Yang, a Hong Kong-based analyst at Barclays Plc, told Bloomberg. "If you're losing so much money in the stock market, that dampens your desire to buy a car."

Even before the recent stock crash, weaker demand led to China's first monthly auto sales decline in the past two years, in June compared to last year.

Another reason behind less-than-impressive sales figures in China could be friction between foreign automakers and their dealers. Historically, foreign automakers had pushed wholesale figures higher by placing abnormally higher inventories at dealerships. Dealers then threatened to stop ordering cars and demanded less inventory and sales targets from automakers. That's part of the reason both Ford and General Motors have recently switched from reporting wholesale sales in China to retail sales.

Yet another reason for Ford's slowing sales in the region is simply increased competition on two fronts. First, tensions escalated between Japan and China in 2012 over a territorial dispute, which sent Japanese automakers' sales in China plummeting for more than a year. Ford was a big beneficiary and stepped in to take market share from its Japanese competitors as Chinese consumers looked away from Japanese vehicles. Today, however, Japanese carmakers have made a comeback, with eased tensions between the two countries.

Ford, along with other foreign automakers, is also seeing increased competition from Chinese automakers, which found success flooding the market with cheaper SUV options. In fact, at the end of April, Chinese brands had increased their market share in China by 400 basis points, or four percentage points, to 41%.

That has forced foreign automakers to slash prices to avoid losing further market share. Ford cut the price of its Explorer SUV by more than 8%, and GM did the same on more than 40 models it sells in China. Likewise, Volkswagen and its joint ventures slashed the price on its entire lineup, between $800 and $1,600 per vehicle.

"To expect that every quarter you are going to have double-digit growth... I don't think that is where the overall industry is headed," James Chao, Shanghai-based Asia-Pacific managing director at industry consultant IHS Automotive, told Automotive News China. "Capacity additions by automakers are coming on stream right now and in the next few years, just as the market has started to see some real weakness," he said. "It is all worrisome."

While China's overall sales growth has certainly slowed in 2015, it still represents an extremely valuable market for automakers. Investors would be wise to watch increased competition and pricing cuts from automakers in China. If Ford can focus on growing its Lincoln luxury sales and SUVs in that country, it will still be a very solid 2015 for the Blue Oval overseas.