Please ensure Javascript is enabled for purposes of website accessibility
Log In Help Join The Motley Fool
Free Article Join Over 1 Million Premium Members And Get More In-Depth Stock Guidance and Research
By Daniel Miller - Jul 16, 2015 at 11:27AM

A bullish quarter and high percentage of shares sold short was the recipe for Amira's 16% gain early Thursday.

What: Amira Nature Foods Ltd. (NYSE: ANFI), a international producer of packaged foods and specialty rice with more than 200 SKU's selling in over 60 countries, is moving 16% higher in early Thursday trading. The company announced fourth quarter results of its fiscal 2015 and bullish investors liked what they saw -- and investors selling shares short didn't.

"Our strong fiscal fourth quarter and full year performance reflects increased demand for our products across categories and geographies. We are seeing revenue growth around the world – in India, our important home market, and across the emerging markets geographies of Middle East, Africa and Asia." said Karan A Chanana, Amira's Chairman and Chief Executive Officer, in a press release. "We are also seeing signs of continued strength in our smaller, but rapidly expanding developed world business, where we entered into new relationships in the UK, Continental Europe and the United States. "

Now what: Part of the driving force behind Amira Nature Food's pop in stock price this morning could be bears covering their short positions after a strong quarter. The current short interest on the company is 28% with about 4.49 shares short as of 6/30/2015. 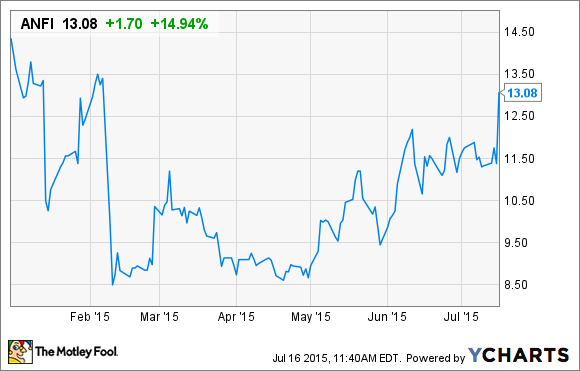 As the company continues to build out distribution around the globe and capitalize on consumer demand for healthier and more premium rice, its overall business should continue to improve. The company's stock price has been trending higher since early February and with improving quarterly results and a slew of bears potentially covering short positions, the stock could continue higher although I personally will be watching this one from the sidelines.