Please ensure Javascript is enabled for purposes of website accessibility
Log In Help Join The Motley Fool
Free Article Join Over 1 Million Premium Members And Get More In-Depth Stock Guidance and Research
By Ashraf Eassa - Jul 24, 2015 at 11:00AM

Shares of chip giant Intel (INTC 1.48%) have fallen a steep 21.2% year-to-date as demand for PCs using the company's microprocessors have proven more sluggish than previously anticipated. For the current year, Intel has signaled to investors that it expects sales to be down by 1% compared to 2014 levels as its non-PC business units mostly, but not completely, offset what the company says will now be a "high single-digit" decline in the total addressable market for PCs in 2015. 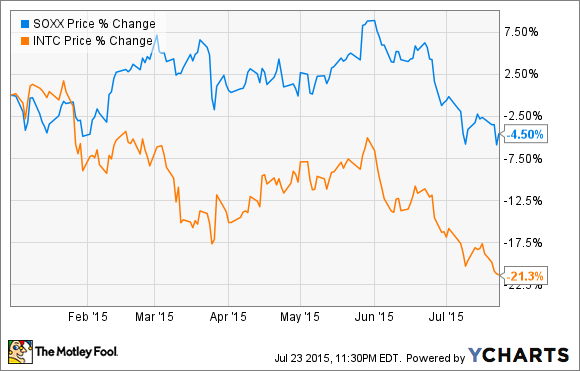 Is the bottom in for this chip giant's revenue base? As long as the PC declines get "less bad" and the company's data center group continues to deliver strong growth rates, then it would seem so.

PCs could stabilize, allowing its data center group to drive growth
This year is proving to be pretty difficult for the personal computer market, and the market probably isn't ever going to return to being a healthy growth market; even Intel CEO Brian Krzanich said at the company's annual stockholder meeting that the company is planning for PCs to be "flat to slightly down mid-single digits over the long term."

However, as long as Intel can minimize the declines (and perhaps eke out some years of modest growth now and again), the company's other major business -- its data center group -- should be able to carry the business to growth.

According to Intel executives, the company's data center group is on track to grow at a 15% revenue compounded annual growth rate through 2018. This segment brought in $14.39 billion in sales for the company during 2014 and, if Intel's growth projection of 15%-or-better holds for the year, it should generate about $16.55 billion in revenue for 2015.

Piling on another 15% growth from that $16.55 billion level yields about $19.03 billion, or sales growth of $2.98 billion, more than offsetting a potential 5% decline in PC sales. In fact, if Intel can actually achieve 15% growth in its data center business in 2016, then the company may be able to withstand a nearly 10% drop in PC chip sales and still keep overall sales roughly flat.

Now, "roughly flat" is hardly a phrase one associates with a business that one should rush to pile his or her investment dollars into, but I do think that it throws some cold water on the notion that Intel is in any imminent danger.

With that being said, keep in mind that these are ballpark numbers, since we won't know both Intel's actual full-year 2015 numbers as well as the company's 2016 growth expectations until early next year.

What about Intel's other segments beyond the data center?
Although Intel executives play up the company's prospects in segments such as NAND flash and the Internet of Things, these businesses are fairly small portions of the company's overall revenue base.

That's not to take away from the potential long-term value of these businesses -- after all, both of the businesses mentioned above represent large total addressable markets and could be much larger portions of Intel's business longer-term -- but in terms of near-to-medium term financial performance, they're not really "needle movers."

Intel can return to growth
As long as the PC market doesn't fall out from under Intel, and as long as the company can actually deliver on its previously stated data center growth targets, Intel should be able to grow from here on out.

Of course, there are the possibilities that PC declines get worse from here (although this doesn't seem that likely) and/or that the company's data center growth sputters, which could pose significant risks to the company's financial performance and, ultimately, share price. Investors should pay close attention to what Intel management ultimately projects for PC declines and data center growth in 2016 at its investor meeting later this year.

This Streaming Stock Could Soon Change Beyond Recognition