What's happening: Many headlines are guilty of being sensationalistic, but TrueCar (NASDAQ:TRUE) is indeed getting crushed today. The stock is trading more than 36% lower in Friday afternoon trading after reduced earnings guidance and multiple analyst downgrades.

Why it's happening: Thursday evening, TrueCar held a preliminary second-quarter 2015 results conference call, during which management warned that its second-quarter loss could widen to as much as $15.5 million as fewer customers used the TrueCar website to make purchases.

Second-quarter revenue is expected to check in between $65 million and $65.3 million, and the California-based company expects revenue to reach between $252 million and $258 million for the full year, which was below the previous forecast of between $280 million and $290 million.

"We had a lot of prospects this quarter," CFO Michael Guthrie said in a conference call. "We had enough to hit our numbers, we believe; we just didn't close enough. So we have to invest more in the [TrueCar] experience to turn those prospects into unit sales."

Part of the driving force behind weaker second-quarter results was less advertising and marketing spending. TrueCar anticipated it would spend about $20 million in the second quarter on advertising, but ended up spending only $17.7 million as it failed to see return value in higher-priced advertising and opted to sit on the sidelines. While that helped mitigate TrueCar's cost per sale, the company didn't have as much advertising airtime as it would have liked, and that likely had a negative impact on user traffic and sales.

Here's a look at TrueCar's second-quarter growth by channel. 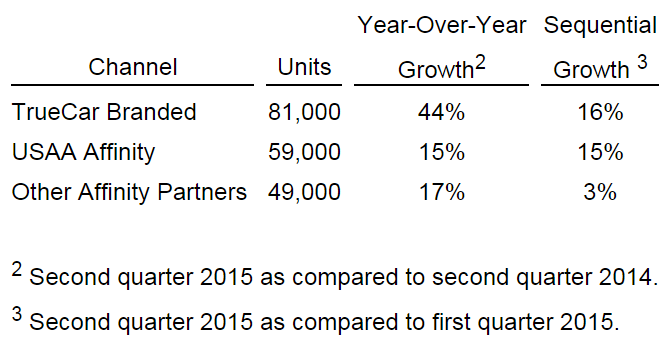 "Although our traffic growth was not as strong as anticipated, the six million consumers we talk to at the top of the funnel are enough for us to achieve our unit and revenue goals," said Scott Painter, TrueCar's founder and chief executive officer, during the conference call. "In order to achieve those goals, we are refocusing on the core experience all the way from the initial engagement of the consumer on the front end of the experience through to post-sale engagement for feedback.

Following the announcement Goldman Sachs downgraded TrueCar to "neutral" and removed the California based company from its "Americas Buy List" while moving its price target from $17 down to $8.

Last night's conference call is the latest speed bump amid a rough July for the company. In mid July, AutoNation and TrueCar agreed to end their partnership, and while both companies played off the situation, investors become more anxious about TrueCar's growth potential. However, it's important to note that the termination of AutoNation's partnership happened in the third quarter and won't impact second-quarter results -- for better or worse, that's something that is still on the road ahead.