Stratasys (NASDAQ:SSYS) is set to report its second-quarter earnings on Thursday before the market opens. Going into the report, the Wall Street community expects the 3D printing giant to generate $182 million in revenue and earn $0.15 per share, after adjustments.

Beyond the headlines, investors should familiarize themselves with the underlying drivers of Stratasys' business to help determine if the long-term investment thesis remains intact. In total, there are three key areas for investors to watch when Stratasys reports earnings. 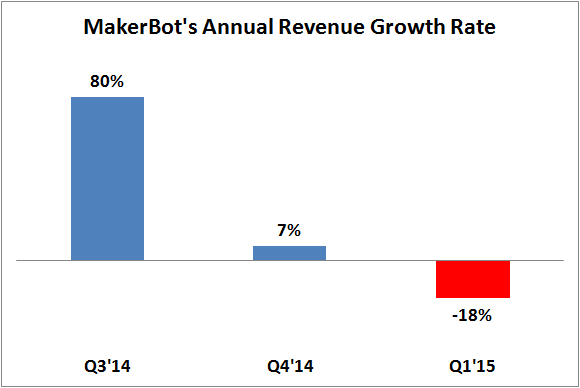 During this time, MakerBot experienced a number of growing pains around quality control and changes to a distribution model that has grown increasingly reliant on third-party resellers. These developments prompted management to reevaluate its growth assumptions for MakerBot to the point that it was forced to write down the acquisition value of MakerBot on two occasions. To date, Stratasys has written off approximately $296 million -- 73% -- of the total price it paid for MakerBot in 2013.

Although MakerBot's revenue is expected to fall between 25% and 30% this year compared to 2014, management maintains that the unit's growth will improve and "ramp up to, or exceed, company averages in 2016."

In other words, when Stratasys reports earnings, investors should key into any actions management is taking to stage this kind of turnaround.

Overall, the company experienced a broad-based slowdown across most geographies and industries, which it believes was the result of several factors, including a slowdown in capital spending, currency headwinds, consolidation by some of its distribution partners, slower than expected uptake of its recently expanded line of Connex 3D printers, and general softness in Asia.

On Thursday, investors will want to see if these headwinds continued to cause demand problems for Stratasys' 3D printing systems in the second quarter.

3. Installed base growth
At the close of the first quarter, Stratasys collectively sold 129,197 3D printers across its Stratasys, Objet, and MakerBot brands, since their respective inceptions. This industry-leading installed base feeds the company's razor-and-blade model, giving the company an opportunity to repeatedly sell high-margin materials as the printers are put to use over their lifecycles.

Although Stratasys has a leg up on the competition in terms of its installed base, its unit growth rate has been slowing over the last year, suggesting that Stratasys' technology may becoming saturated across the industry:

Arguably, Stratasys' installed base plays a major role in the company's future earnings potential from the sale of high-margin materials, meaning investors will want to key into any significant changes on this front.

All eyes on Thursday
When Stratasys reports earnings on Thursday, Foolish investors should focus on how the underlying business is performing, rather than how investors react to the news. Be on the lookout for how MakerBot and Stratasys' product segment has been performing, and material changes from the company's installed base growth rate.