Shares of Enterprise Products Partners (NYSE:EPD) have not had it this rough since the financial collapse in 2008. Over the past year share prices have lost more than a quarter of their highs.

Based on this alone, you would think that Enterprise is just suffering with the rest of the industry. The comapny's recent financials, though, seem to paint a very different picture. 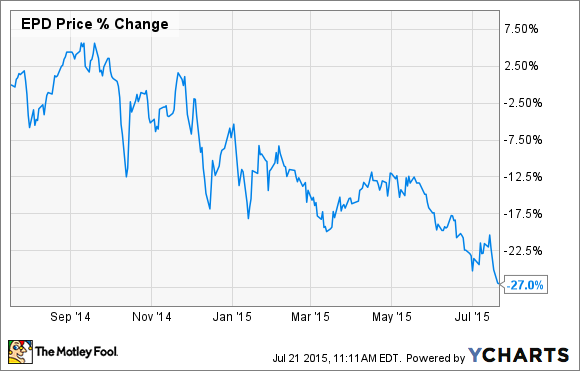 With the company due to report earnings on July 30, it may be time to check in with Enterprise to see if its income and cash flow have been as affected as its stock price suggests, or if perhaps the sell-off in shares is providing a great time to buy.

Tale of the (misleading) tape
One thing that bearish investors will point to in Entrprise's results is declining revenue. Last quarter's revenue of $7.42 billion was a 42% drop from the prior year's numbers. Yes, this did happen -- but you need to take that revenue decline in context with the declines in operational costs as well. Overall, net operational income over that same time frame declined only 13%.

This is one example of the eccentric results that typically come from Enterprise and other pipeline master limited partnerships. Most of the operational costs of a pipeline are variable rather than fixed like those of a refinery or a mine, so revenue changes don't necessarily reflect strength or weakness from quarter to quarter. In fact, Enterprise even says in its investor reports that about 85% of its gross margin -- its own crude version of operational margin -- comes from fee based contracts.

What to look for
For the most part, the reason to invest in Enterprise Products Partners is because it pays a strong divided. Since this is the case, the two numbers that are really worth paying attention to when the company reports earnings is its distributable cash flow and its distribution coverage ratio. Distributable cash is the amount generated from operations left over and available to dole out to its investors, and the coverage ratio is the dsitributable cash divided by what is actually handed out.

Last quarter, Enterprise generated about $1 billion in distributable cash, a slight uptick from the previous quarter. That also gave the company a coverage ratio of 1.4. What this means is that the company generates a bunch of excess cash on top of its distirbution payments. While there is no reason to believe that distributable cash will fall much from these levels the coming quarter, it's reassuring to know that there is a lot of wiggle room there in the event that something happens.

Considering how little the drop in oil and gas prices affected the company's distributable cash last quarter, chances are it won't have a significant impact this quarter either. Knowing this, and how much wiggle room the company had last quarter with its coverage ratio, another strong quarter might show that the recent drop in share prices may not have been warranted.

What a Fool believes
Perhaps I'm a little biased as a shareholder of Enterprise, but from a long term perspective there is an awful lot to like about this company. It already has a strong competitive niche in the handling of natural gas liquids, with a robust network of pipeline and processing facilities. So today it's leveraging that network and the immense boom in US NGL production to become a global powerhouse in NGL export and international trade.

Don't let the recent drop in share price scare you -- the decline in oil and gas prices has not had a major impact on the company's ability to do business. Chances are this quarter's earnings will reflect that. Investors would be wise to see the opportunity that the market presents with this stock today.