Despite some disappointing developments in the last three months, United Parcel Service (NYSE:UPS) managed to beat earnings estimates with its second-quarter results. Moreover, management pleased investors when it expressed confidence in hitting the upper end of the company's full-year guidance range. The stock is up more than 5% as of this writing. Let's take a look at how the package delivery company managed to do this.

The company faced several headwinds in the quarter. The first was foreign-currency effects, with the stronger U.S. dollar reducing international package revenue growth from a gain of 1.5% to a loss of 6.4% in the quarter compared to last year. The second was that, as CFO Richard Peretz argued on the earnings release,  "The U.S. economy appears to be growing at a slower pace" -- UPS generates the overwhelming majority of its earnings from the U.S.

Third, in the previous quarter, management had outlined that its business-to-business growth was "for the first time in a very, very long time" stronger than its business-to-consumer growth -- a good sign because B2B is seen as more profitable. However, anyone expecting strong growth in this area is likely to have been disappointed by management's commentary on industrial performance in the quarter.

With these issues as a backdrop, how did UPS beat earnings estimates?

As you can see above, UPS actually missed analyst estimates for revenue in the quarter, but the company beat EPS estimates by $0.09. There are two reasons why.

Why UPS beat estimates
The first is that the international package segment saw a strong increase in profitability, which management put down to the fact that "network improvements, volume growth and pricing initiatives all contributed to expanded operating margin and increased profitability. The segment experienced growth from middle-market accounts and improved premium product sales."

Indeed, as the table below demonstrates, international package operating income rose 17. 2% on an adjusted basis compared to the same period last year. The table also shows the contribution to the adjusted operating income increase of 8.1% in the quarter. The 23.8% and 21.1% contributions from international package and supply chain and freight, respectively, are impressive given that their revenues are around a third and a quarter, respectively, of the U.S. domestic package segment:

The second reason is the ongoing success of the dimensional-weight pricing initiative undertaken by UPS, and incidentally FedEx, this year. For now, suffice it to say that, as the chart below demonstrates, UPS has seen the initiative slow the growth of its average daily package volumes and its revenue, but average revenue per piece has started to grow again. 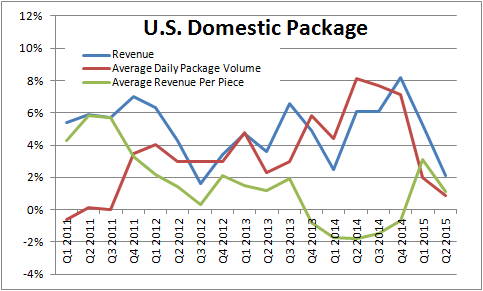 In other words, the initiative means that UPS is shifting toward a more profitable package delivery mix. Indeed, operating income growth for the U.S domestic package segment in the first half is up 6.3% while its revenue only increased 2.7% in the same period. Dimensional-weight pricing appears to be increasing margin at UPS.

The bottom line
Overall, it was a good report from UPS, and the bullish noises on the international package segment will please investors, particularly as the company had to overcome some significant headwinds in the quarter. Meanwhile, developments in the U.S. domestic package segment are suggesting more margin growth to come.