There aren't many analysts out there who could have predicted the raging success that Total (NYSE:TOT) had this previous quarter. Adjusted net income per share came in only 3% lower than this time last year despite the fact that the average realized price for a barrel of Brent crude oil fell 43% over that time period. Total was able to accomplish this thanks to several things working in its favor, so let's drill down into the financial statements to see what made it all possible

This quarter came at quite a surprise to many. Total's net income figures beat consensus estimates compiled by S&P Capital IQ by 19% on the quarter. The ability to generate these kinds of numbers didn't simply happen overnight, though. Rather, it was the culmination of a multitude of events including the timing of new projects coming online, some well-planned divestments and turnaround work, and a major cost-cutting plan to eliminate $1.2 billion from its operational costs.

All of these efforts can be best seen in the company's segment earnings. 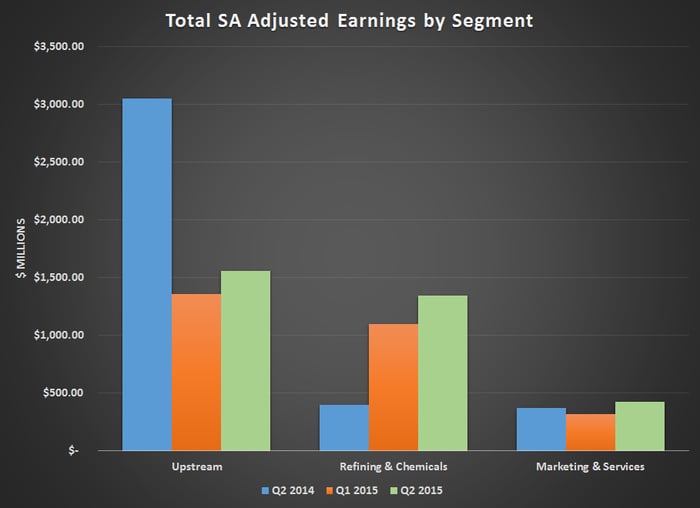 These segmented earnings read exactly like an integrated oil company's are supposed to. As upstream production income declines from lower oil prices, earnings from refining and chemicals increase from the cheaper feedstock costs. But these results are much better than other integrated oil companies' results as of late. Total was able to maintain stronger profit margins in its upstream segment thanks to a 12% increase in production year over year. For a company that produces 2.3 million barrels per day, that's a huge jump.

A couple large components of that boost include the start of projects in Angola and its concessionary contract with the Abu Dhabi Company for Onshore Petroleum. What is even more promising is that based on these numbers much of this new production must be profitable at lower oil prices. All you need to do is look at the upstream side of both Royal Dutch Shell and BP as of late to see what unprofitable production can do to an income statement.

The other promising element that shouldn't go overlooked is the massive boost in income from its downstream segments. Refining and chemicals saw a 500% increase in net income thanks in large part to a major swing in the European Refining Margin Indicator (ERMI). This past quarter, ERMI was $54 per ton of refined product, whereas ERMI for this time last year was a mere $10. The chances of this kind of refining returns in the future probably aren't that great. Over the past 12 years, the ERMI has broken the $50 per ton threshold over a quarter only one other time.

But some of that income boost can also be attributed to increasing its refinery throughputs by 18% thanks mostly to the Jubail, Saudi Arabia, refinery start-up -- a joint venture project with Saudi Aramco -- and the conclusion of several upgrade and turnaround projects throughout its European refining segment. Another point of note is the growing strength of its international retail segment. Large investments in developing a retail infrastructure in Africa are starting to pay off. This work today could pay huge dividends down the road as Africa has become the continent with the fastest economic growth.

Execution, execution, execution
The numbers for Total this quarter look really good, but what is most encouraging is that the company is seeing results from a well-executed business plan. These new, seemingly more profitable projects brought online have given the boost to cash flow that the company desperately needs. Total fully expects to be free cash flow positive by 2017, which means that it needs to cover both its capital expenditures and its generous dividend. This past quarter, it was able to maintain a rather robust cash flow that covered its capital expenditures as well as reduce its net debt to capital ratio from 28.2% this time last year to 25.9%.

Also, thanks to some of its well-curated asset sales, it has been able to reduce capital employed in its refining and chemical as well as retail segments. This is important because these two segments have historically been weaker for the company. Targeted investing and divesting in these segments have boosted their returns on capital employed such that overall ROCE of 10% declined only one percentage point from this time last year despite the clear weakness in its upstream segment.

If Total can continue to cut costs and target its investment/divestment strategy like it has over this past year or so, much better times could be ahead for this French oil giant.

What a Fool believes
It's almost hard to overstate how fantastic Total's quarterly earnings were considering the market for oil today. What should be even more encouraging for investors in this stock is that this could be just the precipice of even better times ahead. Between now and the end of 2016, the company expects to bring another nine major projects online that will give another big boost of what should be very profitable production. Based on these results and what Total has in the development pipeline, it's definitely time to put Total on your radar as a potential investment.