Stratasys (NASDAQ:SSYS) reported its second-quarter 2015 results before the market opened today. Revenue and earnings were both in line with analysts' expectations.

Shares are down about 11% in midday trading, having partially recovered from opening more than 16% in the red. The market is no doubt reacting to the company pulling its full-year 2015 guidance due to its limited visibility into near-term customer demand. Stratasys did, however, provide guidance for the third quarter, and reiterated its long-term growth targets.

The big picture
Stratasys grew revenue 2% year over year to $182.3 million, meeting expectations of $182.1 million. Earnings on a non-generally accepted accountings principles basis dropped 73% to $0.15, hitting the consensus on target. Meanwhile, the company lost $0.55 per share on a GAAP basis.

Organic growth (growth in businesses owned for at least one year) fell 10%, or 5% on a constant-currency basis. MakerBot's 57% revenue plummet was an anchor on organic growth.

CEO David Reis commented: "We believe our industry is transitioning through a period of slower growth, as users digest their investments in 3D printing and expand the utilization of recently acquired capacity. Despite these headwinds, and certain ongoing macroeconomic challenges in Asia, we are encouraged by sequential improvement in areas of our business, and remain optimistic about our longer-term growth prospects."

MakerBot's woes continue
Investors knew to expect continued weakness in the desktop 3-D printer maker's results, as it continues its reorganization and turnaround. While revenue dropped 57% year over year, the company reiterated that it expects MakerBot's growth rates to ramp up to, or exceed, overall company averages by 2016.
Capital spending challenges persist
Stratasys' core enterprise-focused business experienced the same challenges involving decreased capital spending among businesses again this quarter. Positively, however, the company saw a sequential pickup in demand for its high-end Fortus and Connex product lines.
Brighter spot: Recurring revenue
While not as strong as in the recent past, Stratasys' recurring revenue streams continue to demonstrate that its razor-and-blade-like business model appears on track. The company is generating decent recurring revenue from its installed base, even in a period of slower-than-expected industry growth.

Customer support revenue increased by 17%. This is revenue generated mainly by maintenance contracts on the company's 3-D printers. Overall consumables (materials) growth of 6% was anemic. However, Reis said on the conference call that excluding MakerBot, consumables in the core business increased 19% on a constant-currency basis. So, MakerBot and the currency headwinds are obscuring a pretty robust number here. 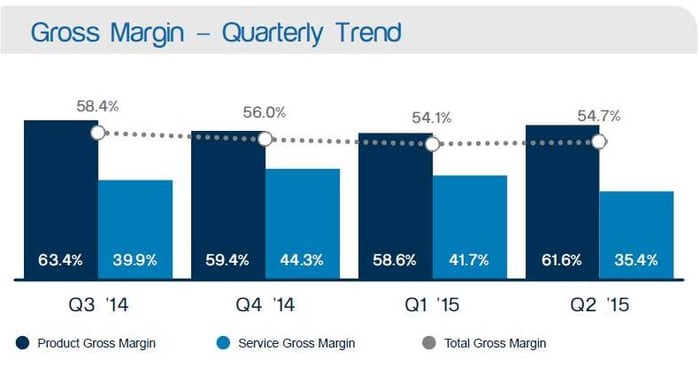 Stratasys said the year-over-year decline in gross margin was driven primarily by the acquisitions of the service bureaus Solid Concepts and Harvest Technologies in the third quarter of last year. The sequential uptick in product margin was driven by a mix that favored higher-end systems.

Full-year 2015 guidance withdrawn; Q3 guidance provided
Stratasys withdrew its 2015 guidance due to its limited visibility into customer demand for the remainder of the year; prime competitor 3D Systems did the same last quarter. The company did, however, provide its expectations for the third quarter, though the adjusted EPS range is very wide:

A deep dive into Stratasys' results and a conference call highlights article are forthcoming.