Matthew Frankel, CFP, Dan Caplinger, Eric Volkman, Tim Brugger, and Todd Campbell
(TMFMathGuy)
Author Bio
Matt is a Certified Financial Planner based in South Carolina who has been writing for The Motley Fool since 2012. Matt specializes in writing about bank stocks, REITs, and personal finance, but he loves any investment at the right price. Follow him on Twitter to keep up with his latest work! Follow @TMFMathGuy

When you're just getting started with investing, it may be tempting to jump right into "it" stocks such as Tesla Motors or Netflix. However, the stocks that actually make the best investments for beginners may surprise you. We asked five of our experts which stocks they would recommend for beginning investors, and here's what they had to say.

Todd Campbell: One of the best things a new investor can do is avoid investing in high risk stocks. When you're starting out, it makes sense to pick a handful of steady-Eddy companies that can serve as core holdings, such as UnitedHealth Group (NYSE:UNH).

UnitedHealth Group's trailing-12-month revenue has surged from $90 billion before the passage of Obamacare to nearly $140 billion in the past five years, and its earnings per share have climbed from less than $4.50 to $6.28 over that time. 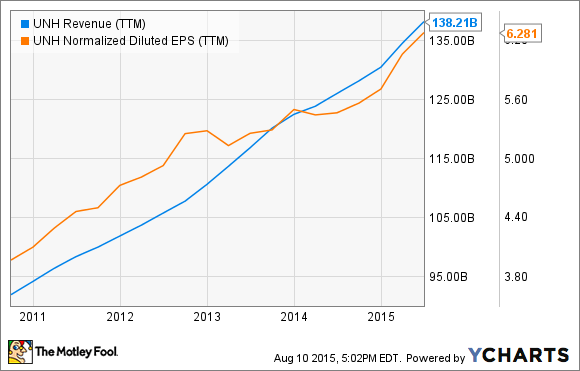 Beginning investors could also benefit from regular dividend increases. Since 2010, the amount of money UnitedHealth Group has returned to investors in the form of a quarterly dividend has increased from $0.125 per share to $0.50. Since membership in UnitedHealth Group health-insurance plans is likely to continue growing, there's a good chance that its dividend payout will head higher, too.

Eric Volkman: My idea of a good company for beginning investors is one that has a straightforward business model. Ideally, that company would also be familiar to the layman; there's nothing like personal experience to get a feel for how effectively an enterprise does business.

Starbucks (NASDAQ:SBUX) fits both criteria. Even for those who don't indulge in the company's famous drinks, it has a near-ubiquitous presence across America (and, increasingly, in markets abroad). It's as familiar as your favorite coffee mug.

Although it's a sprawling, monster company, its business model remains tight and simple at the core. Starbucks sells java, a lot of it, and makes coin on the side with related products. These include in-store offerings such as sandwiches and snacks, plus goods stocked at retailers, convenience stores, and the like (packs of instant coffee, for example, or pre-mixed beverages).

Starbucks has also become a reliable dividend payer, dishing out a payout every quarter since mid-2010. Over that time, it's risen more than threefold from $0.05 per share to $0.16, on a stock split-adjusted basis. 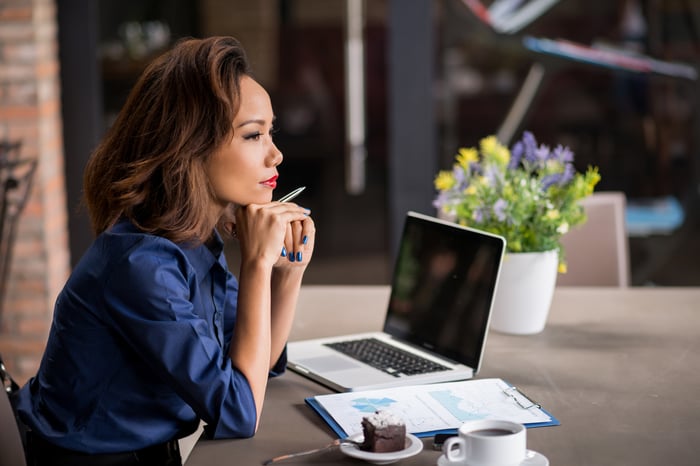 Matt Frankel: There are a few good characteristics to look for in beginner-friendly stocks. The company's business should be relatively easy to understand, there should be a clear history of responsible risk management, and there should be a wide moat, or distinct competitive advantage. One stock that meets all of these criteria is Wells Fargo (NYSE:WFC).

Unlike the rest of the large U.S. banks that have large operations in trading and investment banking, Wells Fargo operates more like a traditional savings and loan. The bank has complex operations as well, but the majority of its business comes from taking in deposits, and then lending the funds to customers.

As far as a wide moat is concerned, Wells Fargo's size and brand image give it a strong competitive advantage, and its business (consumer banking) will always be in demand. There is little threat that competitors will capture a significant portion of the company's business -- after all, the next largest bank that primarily focuses on consumer banking is much smaller.

Finally, Wells Fargo does have an excellent history of responsible management, with a history of higher-than-average lending standards and avoidance of "risky" assets. Of the "big four" U.S. banks, Wells Fargo was the least affected by the financial crisis and has delivered consistently strong performance over the past few decades, with an average annual total return of 14% over the past 20 years. Just look at how strong Wells Fargo's long-term performance has been in comparison with its peers. 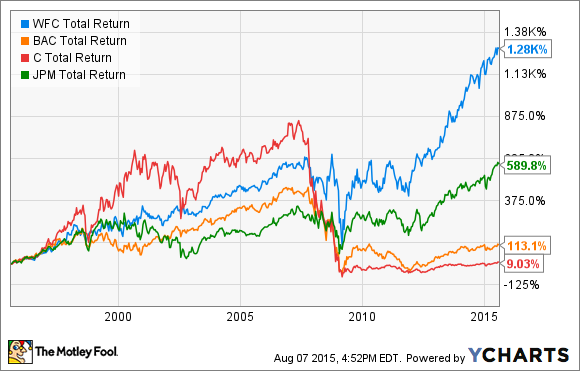 While it's definitely true that many bank stocks make for complicated and volatile investments, Wells Fargo is an exception that works for any investor's portfolio, new or old.

Dan Caplinger: One of the first stocks I ever owned was Berkshire Hathaway (NYSE:BRK-A), and one of the reasons I did was that I liked the diversification that the conglomerate gave me. On one hand, Berkshire owns a huge number of wholly owned businesses, ranging from companies like See's Candies and Geico Insurance to railroad giant Burlington Northern Santa Fe. At the same time, Berkshire also holds a portfolio of publicly traded stocks, giving some free insight into Warren Buffett's thought process in selecting high-quality companies to invest in for the long haul.

Some will argue that a conglomerate is a far too complicated way for beginning investors to get their first exposure to the investing world, and it's true that there are many moving parts within Berkshire Hathaway to consider. Nevertheless, the clarity with which Buffett writes his annual reports and the attention to detail for many of his more important holdings constantly teaches lessons that even the most experienced investors can learn from and apply to make themselves invest better. Even as the time inexorably approaches when Buffett and compatriot Charlie Munger will no longer be able to remain at the helm, Berkshire Hathaway is a great way for beginning investors to introduce themselves to the world of stocks.

Tim Brugger: What makes a good stock for beginning investors? Recognizing and appreciating the business case behind a company's offerings is a great place to start. There's a certain comfort level in owning shares of a company investors know and appreciate. Of course, familiarity is just one attribute valuable to the beginning investor -- a stock that offers sound, long-term growth potential based on strong financials is critical. That said, Facebook (NASDAQ:FB) foots the bill, for several reasons.

There are an estimated 3.17 billion Internet users around the globe. As of last quarter, nearly half the world's connected population -- 1.49 billion, to be precise -- were monthly active users of Facebook. Even more impressively, just shy of 1 billion users accessed Facebook every day.

Better still, as large as Facebook has become, it continues to deliver a stellar financial performance. In the second quarter, Facebook enjoyed a 43% jump in ad revenue, and 39% overall. At over $4 billion in total sales in Q2, Facebook is setting its financial performance bar higher each and every quarter; and that's not even the good news.

What sets Facebook apart, and makes it a good stock for beginning investors, is that it's just scratching the surface of its revenue potential. High-priced video ads are only now beginning to affect Facebook's top and bottom lines. The over 300 million Instagram monthly active users will also begin adding to Facebook's already strong financial results, now that CEO Mark Zuckerberg has decided to fully monetize the popular photo-sharing social-media property.

Toss in future growth drivers such as WhatsApp, Messenger, and Oculus Rift, and Facebook's future is looking awfully bright. That, combined with its immense popularity, makes it an ideal choice for beginning investors with a long-term outlook.