The uranium market is oversupplied right now, but if China has its way, that won't last for long, and Cameco will be a big beneficiary

China is a wild card right now on the financial stage, but there's one sector in which this giant nation's spending still looks set to fundamentally change global industry dynamics for the better: uranium. Like other commodities, there's more uranium floating around than needed right now. But that doesn't look like it will last long if China gets its way.

Who's this Cameco?
Cameco Corporation (USA) (CCJ 0.72%), based in Canada, is one of the world's largest uranium miners. That's pretty much all the company does. It has relationships with electricity producers around the world, including those in China, and it recently inked a deal that got its foot in the door in India. These two nations have massive electrical needs and relatively small nuclear power plant fleets.

Like other miners, the global drop in commodity prices has taken a bite out of Cameco's top and bottom lines. In fact, the miner just reported earnings that missed analyst estimates by 40%. Production was down 1% and pricing inched up just 1%. In all, it wasn't the best quarter, with CEO Tim Gitzel commenting that "prices and demand remained 'flat' due to the current oversupply in the market."

But that's today. Which is why Gitzel quickly added that "the long-term outlook for nuclear energy, underpinned by strong fundamentals, remains positive." And that's where China comes in.

What the EIA is saying
The U.S. Energy Information Administration, or EIA, just issued a report on the top six uranium-using countries in the world. Why six? Because until recently China was No. 6. But according to the EIA, it's heading quickly to No. 3, behind only France and the United States.

What's interesting to note is that China currently only gets about 2% of its electricity from nuclear -- and that's enough to place it among the top producers in the world. Size clearly matters! But 2% is today, so what about tomorrow? China's plan is to push nuclear to 20% of its energy mix by 2030. That's a huge increase, and the one that the EIA expects will push it past South Korea, Russia, and Japan in the list of top global producers.

This is one big reason Cameco is so excited about the future of uranium, and why you should be, too. As China ramps up its demand, the oversupply situation will resolve and uranium pricing will probably improve -- in a big way. And this future isn't exactly all in the future.

Building a nuclear power plant takes time. China is moving quickly, having built 10 gigawatts of nuclear power production since 2013, nearly doubling its nuclear fleet in just a couple of years, according to the EIA. That's backed up by Cameco, which explains that China has 23 reactors under construction right now. Essentially, there's uranium demand building in the pipeline as you read this. Supplying power to an up-and-coming nation and controlling pollution levels are two key reasons for China's nuclear push.

All of these positives back Cameco's projection that uranium demand is well on its way to increasing roughly 40% over the next decade or so. That should sop up excess supply today and lead to a boost in demand, which will lift uranium prices. That, in turn, should help improve Cameco's operating margins which were in the low single digits last year, but were solidly in the 20% area as recently as 2011. And moving off of last year's low base means even small improvements could have a big impact in the near term. 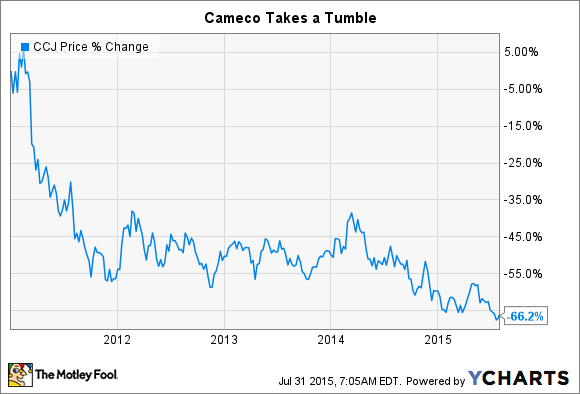 And that's only looking at China. Remember that Cameco just signed an agreement with India to provide that giant and still growing Asian nation with nuclear fuel. This is a new market for Cameco in a nation that's likely to find nuclear just as alluring as China as it seeks to provide power to its citizens. India, for reference, has six reactors under construction right now.

No rush, but start thinking
Cameco's shares have lost roughly two-thirds of their value since peaking in 2011. And the stock isn't likely to go anywhere fast right away. Moreover, China's demand story will take time to play out. So you don't have to rush to buy this pure-play uranium miner. But with this backdrop you should be starting to look very closely at the uranium market, with Cameco a prime target for your research.