Please ensure Javascript is enabled for purposes of website accessibility
Log In Help Join The Motley Fool
Free Article Join Over 1 Million Premium Members And Get More In-Depth Stock Guidance and Research
By Travis Hoium - Aug 22, 2015 at 10:05AM

Do hydrogen vehicles even stand a chance against today's EVs?

It looks as if the electric vehicle (EV) revolution is starting to take off around the world and the momentum should pick up in the next few years as new models with greater range and better performance are introduced. According the InsideEVs, 320,713 EVs were sold in 2014 and so far in 2015 202,741 have already left the lot with year over year growth every month of the year.

Meanwhile, hydrogen vehicles are only now getting off the ground, and that's a generous statement. Toyota (NYSE: TM), who has made the biggest commitment to hydrogen vehicles, is launching the Mirai this fall at a whopping 8 lots in California and is hoping to sell 3,000 units by the end of 2017, nearly two and a half years from now.

By any measure, EVs are crushing hydrogen vehicles. But understanding why may show you why hydrogen is paying a game of catch-up it may never win.

Tesla Motors can design the Model S's batteries to be low to the ground, improving performance of the vehicle.

In this respect, the only advantages hydrogen vehicles have over EVs is shorter refueling times and a smaller battery pack (which is offset by the hydrogen fuel tank and fuel cell). But the components in a EV are in many ways simpler and more adjustable than a hydrogen car. For example, Tesla Motors (NASDAQ: TSLA) has put the batteries for the Model S in the floor of the car, lowering the center of gravity and improving performance. Hydrogen cars don't have the same flexibility.

While the advantages of refueling more quickly or using hydrogen in general could be debated, what can't be disputed is the availability of electricity and the lack of availability of hydrogen. 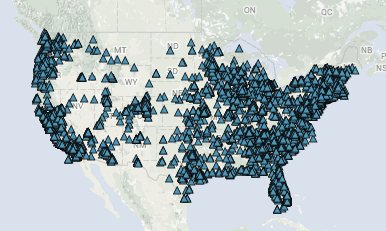 On the hydrogen side, California has two charging stations completed. TWO!

By the end of the year Toyota is hoping to have 15 stations open in California, which means that it'll still be a challenge getting around the state much less the entire country on hydrogen alone.

Not only is electric charging infrastructure more prevalent today, it's easier to build. Electricity is readily available in most of the U.S. and even remote locations could use distributed energy like solar power to charge vehicles. Hydrogen needs to be generated from natural gas and then shipped to stations, meaning billions would be needed to build the infrastructure needed to make hydrogen vehicles viable.

The alternative fuel debate is all but over
Toyota seems to be the one betting the most on hydrogen vehicles and its an uphill battle. The small installed base and weak infrastructure is going up against an installed base of electric vehicles that could reach 1 million in 2016 and improving range and performance that will make EVs even more attractive to consumers.

Elon Musk may be right that EVs are the wave of the future and it's only a matter of time before the rest of the auto industry realizes that.

Right now, it look like electric vehicles are leaving hydrogen's dreams in its dust and if the current momentum continues there will be no turning back for the auto industry.