Despite the jaw-dropping surge among healthcare stocks in general over the last three years, Warren Buffett's Berkshire Hathaway (NYSE:BRK.A) (NYSE:BRK.B) has shown little interest in the high-flying sector. As a matter of fact, this top investing firm has only held on to its entire positions in two healthcare stocks over the last eight quarters, namely Johnson & Johnson (NYSE:JNJ) and Sanofi.

Perhaps the most interesting part, though, is that Berkshire has remained steadfast in its ownership of J&J, even though the diversified healthcare giant has been getting clobbered by the negative impacts of a strong dollar, as well as the introduction of new competitors to some of its key pharma products like Olysio, Remicade, and Zytiga.

In the second quarter, for instance, these negative headwinds resulted in an 8.8% drop in total revenues and a 3.9% dip in diluted earnings per share, as compared to a year ago. Even so, the recently-available 13Fs show that Berkshire didn't sell a single share of its roughly $31 million stake in J&J during the three-month period.

Here's what I think are the reasons why Berkshire hasn't, and probably won't, abandon J&J during these turbulent times.

Reason No. 1: J&J returns the bulk of its free cash to shareholders
One of Buffett's keys to success has been investing in companies that throw off tons of cash and subsequently return the bulk of it to shareholders via dividends and share repurchases. J&J fits that mold perfectly, returning over 70% of its monstrous free cash flows to shareholders in the form of dividends and share buybacks over the last decade. J&J also has a stellar record of increasing its annual dividend, with its 53-year streak still intact: 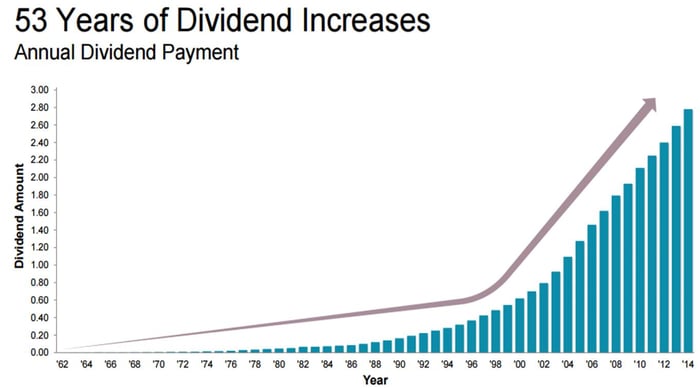 Reason No. 2: J&J has a documented history of beating the broader markets
If your goal is to consistently beat the broader markets like Buffett, you need to invest in market-beating stocks. And J&J has proven to have the goods when it comes to that category. Over the last two decades, its total return to shareholders (including dividends) has never failed to outpace the S&P 500: 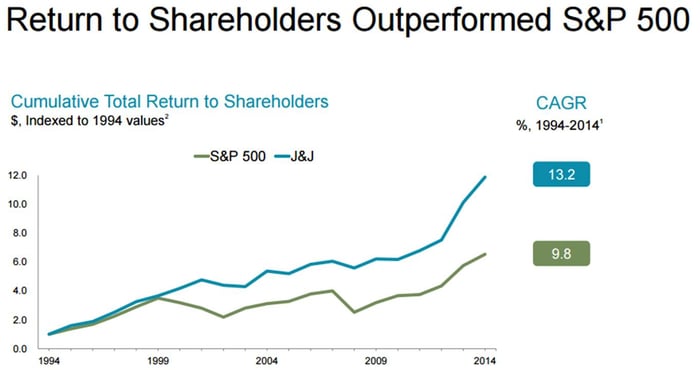 That's an impressive record, and one not easily duplicated. So even if J&J can't shake off these revenue headwinds in 2015, history suggests that investors should give the company the benefit of the doubt going forward.

Reason No. 3: J&J is a powerhouse when it comes to innovation
A history of strong cash flows, dividend increases, and share buybacks is one thing, but what the market really cares about is the future. And J&J's future looks bright. Its R&D department was recently rated No. 1 by the IDEA Pharma Productive Innovation Index for 2015, bringing 14 total new pharma products to market since 2009. Most importantly, though, the company plans on filing regulatory applications for 10 new medicines by 2019, each with blockbuster potential. And J&J has already started this process by recently completing its rolling Biologic License Application for daratumumab with the FDA as a potential treatment for multiple myeloma.

Should you follow Buffett's lead on J&J?
J&J is undoubtedly going through a transformational period right now that's hurting its top and bottom lines. But management has proven to be on the side of shareholders by returning free cash to investors and spearheading the development of multiple new pharma products, resulting in its consistent ability to beat the broader markets.

Looking ahead, investors can probably count on the healthcare giant's corporate culture, which favors innovation and shareholder rewards, to see it through these uncertain times -- making it a great dividend stock to have in your portfolio. Put simply, you may want to take a cue from Buffett and stuff J&J's stock away in your portfolio for the long term.