To say that Detroit automakers were a bit of a disappointment -- in terms of investment success -- in the years leading up to and during the Great Recession would be an understatement. What were once highly respected, powerful companies and prime examples of American industrial might had become a laughing stock of mismanagement and near-sighted business strategies. Though only a few years have passed since the recession, the journey of Detroit automakers' turnaround has been lengthy.

The most impressive turnaround, in my opinion, was the one found at Ford Motor Company (NYSE:F), and the following is one of the vehicles that truly helped change the negative perception surrounding the company.

Fusion debuts in 2006
Former Ford CEO Alan Mulally took control of the troubled automaker in 2006 and immediately set forth a new strategy to focus on producing higher-quality vehicles with better gas mileage that would sell worldwide -- a strategy that would make the roll out of the Fusion very successful, very quickly. Many were pessimistic as Ford, along with other Detroit automakers, had long been forgotten in passenger vehicle segments that Japanese automakers had grown to dominate over the previous two decades. 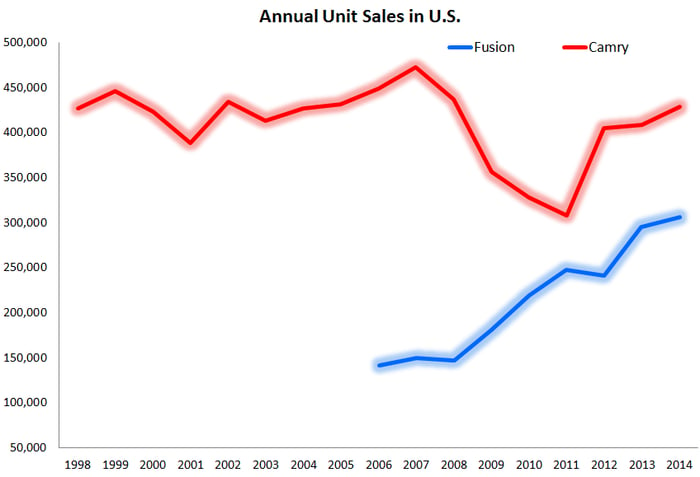 There have been two key areas fueling the Fusion's success in recent years: California and Texas. Sales of the Fusion have almost tripled in California from 2006 to 2014, while the entire midsize car segment only posted 29% growth. Meanwhile, in Texas, sales of the Fusion doubled the growth pace of the overall midsize segment.

Ford's Fusion has been a hit with consumers as well as critics. In less than a decade, the Fusion accumulated many awards, some of those highly respected awards include Motor Trend 2010 Car of the Year, J.D. Power and Associates Most Dependable Midsize Car, Best Car for the Money in the 2012 U.S. News and World Report -- all awards that would have been nearly impossible to imagine a Detroit passenger car winning 10 years ago.

Perhaps even more interesting and difficult to believe, is that the Fusion recently won U.S. News & World Report's Best Hybrid Car for Families -- for the fourth consecutive year. You read that correctly: Not only did a Ford passenger vehicle steal market share from Japanese competitors, it also had a very impressive Hybrid version. Again, both of those statements would have been difficult to imagine more than a decade ago.

While the Fusion's success has been critical for changing consumer perception of Ford here in the U.S., the vehicle is just beginning to do the same overseas.

Ford recently announced that as a part of its global growth plan, it would expand its operations in North Africa. That includes bringing seven new vehicles to North Africa in addition to recently beginning production of the Fusion. Meanwhile, in Europe sales of the Mondeo (Fusion) were up 70% year over year in July and are up 60% through year-to-date July 2015. Lastly, in the world's largest automotive market, China, the Mondeo launched only a couple of years ago and recently set a monthly March sales record for the model.

There are many irreplaceable Ford vehicles. Nothing can replace the Mustang's star power across magazines, Internet headlines, movies, or even toys. Nothing will contribute more to Ford's top- and bottom-line financial performances like America's best-selling truck, Ford's F-Series. And while the Fusion has had a much shorter lifetime on the road, it's hard to argue that the Fusion hasn't been vital to changing the consumer perception of Ford, and revived the company's sales in the midsize car segment, where it was practically left for dead.

Because of the Fusion's success, Ford -- an automaker once known purely for producing giant SUVs and full-size trucks -- is now one of the midsize sedan segment's strongest competitors, and that's a big win in both consumer and investor eyes.