Please ensure Javascript is enabled for purposes of website accessibility
Log In Help Join The Motley Fool
Free Article Join Over 1 Million Premium Members And Get More In-Depth Stock Guidance and Research
By Sean Williams - Sep 2, 2015 at 11:41AM

TASER delivered some shockingly good second-quarter earnings results at the end of July, but unfortunately, it followed up with stunningly bad guidance. 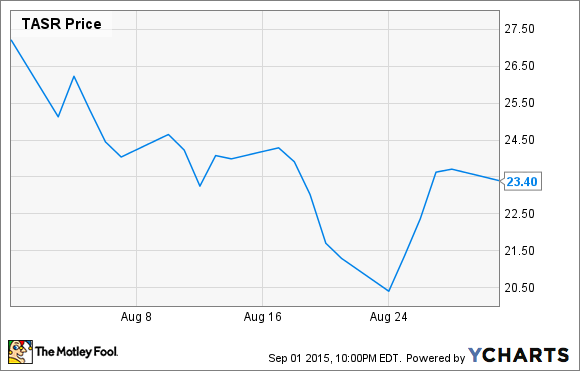 Shares of TASER International (AXON 0.83%), a manufacturer of conductive electrical weapons as well as the Axon brand on-body camera, stunned investors in a bad way in August and fell by 14%, based on data from S&P Capital IQ, after the company reported mixed second-quarter earnings results.

TASER actually delivered its quarterly results on July 30, but the carryover from its report has been so great that the stock has continued to fall. During the quarter, TASER reported a 25.7% increase in year-over-year sales to $46.7 million, led by a 97.5% increase in Axon segment revenue to $8.9 million and steady 15.8% growth in its weapons segment.

More important, total gross margin for the quarter improved 340 basis points to 65.8%, while its weapons segment witnessed its gross margin lift above 70%. Additionally, Axon and Evidence.com bookings for the quarter came in at $30.6 million, a 170% jump from the year-ago period.

Where the wheels fell off the bus -- or should I say where shareholders got stunned -- was in TASER's third-quarter guidance. It called for EPS and revenue to "come in close" to its second-quarter results. The culprit was a handful of order revenue recognized in the second quarter that TASER originally believed would come in the third. While its EPS forecast is more or less on par if you average out the second and third quarters, the "come in close" aspect of $46.7 million is nowhere near the $50 million-plus that analysts had been looking for out of TASER in the third quarter.

Also working against TASER was the recent market meltdown. Although the company's orders are probably well insulated from gyrations in the stock market, TASER's stock price is not, since it trades at a lofty 49 times trailing-12-month earnings. Generally, skeptics go after companies with high premiums during a correction, and TASER fit the bill perfectly following its mixed earnings results and guidance.

The question now is whether TASER stock can rebound off its lows or if further weakness may be in the cards.

You could certainly argue that the table is set for TASER to see a marked increase in conductive weapon sales and on-body cameras following the rash of recently publicized officer-citizen interactions covered by the media. TASER's projected growth rate in the mid to high teens would imply that Wall Street sees this as a genuine possibility, too.

However, we can't ignore TASER's premium valuation, nor the fact that its costs will likely rise almost in tandem with its revenue growth. Long story short, TASER's valuation is likely to remain at a premium for quite some time longer. With that in mind, I'd say your best course of action would be to hang out on the sidelines and wait for an even more substantial pullback or for evidence of an acceleration in the growth of its bottom line before considering a position.