Please ensure Javascript is enabled for purposes of website accessibility
Log In Help Join The Motley Fool
Free Article Join Over 1 Million Premium Members And Get More In-Depth Stock Guidance and Research
By Matthew DiLallo, Rich Smith, and John Rosevear - Sep 5, 2015 at 11:02AM

Like fine cars, there are some stocks that are worth their premium price tag. However, there are others that are just expensive and don't offer buyers any premium experience. We found three automotive stocks in that latter category, as they are just too pricey for potential future reward -- which is why we think investors should shy away from them.

John Rosevear: There's an argument to be made that Fiat Chrysler Automobiles (FCAU) is a buy at current prices, even at a very steep (for an automaker) 18 times earnings.

The argument goes like this: Ferrari, which is about to be spun off, is likely to be valued around $9 billion; FCA's whole market cap right now is about $18.5 billion; and the parts of FCA that will be left without the spinoff add up to more than $9.5 billion of value.

It's possible that it will work out that way, and that shareholders will get a short-term boost. But from a longer-term investing perspective, there are two big problems. First, Ferrari is a powerhouse brand, but its growth prospects are extremely limited.

Second, FCA without Ferrari is a company with some very big problems:

Long story short: If you're looking for an automaker to buy and hold, I'd keep looking.

Rich Smith: At roughly half the P/E of Fiat Chrysler, General Motors (GM 3.07%) stock might not ordinarily be one you'd consider "overvalued." In fact, you might even be tempted to say that General Motors stock, with its low P/E ratio, generous 4.7% dividend yield, and strong projected growth rate (15.8% annualized over the next five years, according to analysts polled by S&P Capital IQ), is actually a bargain.

At just 11.4 times trailing earnings, General Motors stock looks to be the cheapest of the Detroit "Big Three." GM stock seems cheaper than Ford's 15.8 P/E and much cheaper than Fiat Chrysler's 20 P/E. What you may not realize, however, is that General Motors is the only one of these three companies that is currently burning cash even as it reports profits under generally accepted accounting principles.

Over the past 12 months, free cash flow at GM came in at negative $6.2 billion. That stands in stark contrast to its reported "profits" of $5.5 billion. And it's getting worse. For all of fiscal 2014, FCF was only negative $1.8 billion.

In contrast, Fiat Chrysler generated positive free cash flow of $1.7 billion (58% more than reported net income) over the past year, and Ford produced a veritable truckload of cash -- $7.6 billion in all, which was more than twice its GAAP net income.

Viewed in this light, General Motors stock isn't much of a bargain at all.

Matt DiLallo: Sure, Autoliv's (ALV 0.38%) stock is down more than 20% from its most recent high, but it's still pretty overvalued. Not only is its P/E ratio of 22 times at a slight premium to the market, but it's the highest of its peer group. 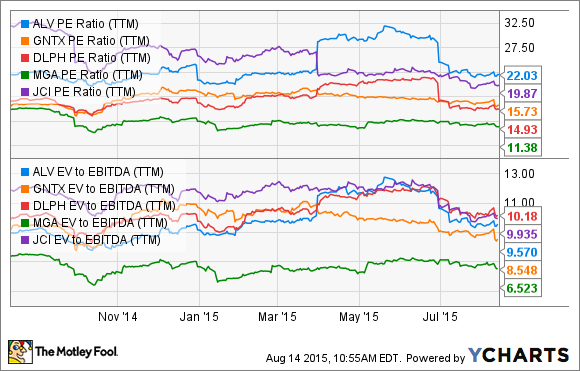 Furthermore, its EV/EBITDA ratio might be middle-of-the-road, but that doesn't make it a bargain.

This premium could be justified if Autoliv were growing really fast, but it's not. In fact, sales are actually expected to decline by 2% this year due to foreign currency headwinds. Even after adjusting for currency fluctuations, sales are only expected to grow by around 6% this year. That's assuming that China's economy doesn't crash, as no airbag will protect auto sales, and therefore auto safety equipment sales, if that happens.

There are simply better automotive stocks to buy these days than Autoliv. The risk/reward just isn't compelling for this cheap stock, and the upside looks limited.