Please ensure Javascript is enabled for purposes of website accessibility
Log In Help Join The Motley Fool
Free Article Join Over 1 Million Premium Members And Get More In-Depth Stock Guidance and Research
By Daniel Miller - Sep 5, 2015 at 10:07AM

Here are a couple of reasons the Ford Bronco coming back in a couple of years makes a lot of sense.

I'm a sucker for a good April Fool's joke; always have been, always will be. Of course, it's more fun when you're in the know, as it was last year when a real photograph of Ford Motor Company's (F -5.54%) Atlas (2015 F-150) concept was Photoshopped to look like a 2016 Bronco. Before long, my Facebook news feed was littered with the photograph and comments such as "This looks awesome!", "Yes, I'm totally getting one!", "It's about time, Ford!" and even an occasional friend tagging me in the status so I could abruptly crush their hopes and dreams, assuring them it absolutely was not in Ford's plans -- at least, it wasn't then. 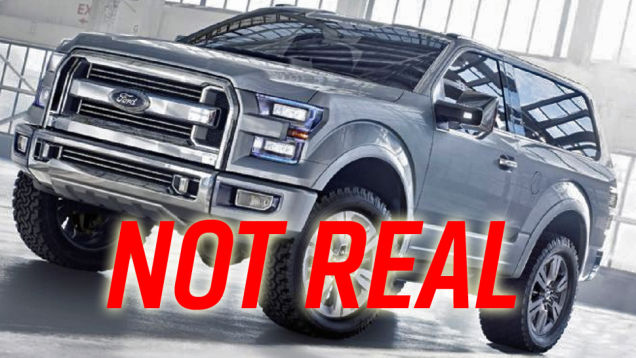 Image source: Truckyeah/Jalopnik "The 2016 Ford Bronco Is Not Happening, Shut Up About It Already."

Oh, how quickly things can change. Not only is Ford in serious discussions to bring production of the midsize Ranger truck back to the U.S., but according to Bloomberg, the company is reportedly planning to bring back the Bronco as well. Here's why it looks like a perfect time to do just that.

Why bring the Bronco back now?
The simple answer is that sales of SUVs are absolutely on fire in the U.S. market right now. But beyond that, the Bronco makes a lot of sense in terms of how it fits into Ford's SUV lineup.

The Escape is one of Ford's top three best-selling vehicles in the U.S. right now, but no one is going to mistake an Escape for a more rugged Jeep SUV -- the two products are completely different SUVs. There is absolutely an opportunity to design an SUV in Ford's lineup with a tougher, more durable, and off-road-styled image. While the Edge and Explorer sell well in the U.S. market, both lack that type of image, but a tougher image is something Ford could easily design with a new Bronco.

The Bronco could very well be Ford's (forgive me) vehicle for stealing market share from Jeep, which has posted a brand-new sales record in every month since November 2013, and has posted 22 consecutive months of year-over-year sales gains -- pretty impressive. As you can see in the Jeep sales graph below, having a lineup of SUVs that can tackle the concrete jungle in the city or go off-road has been a recipe for success. 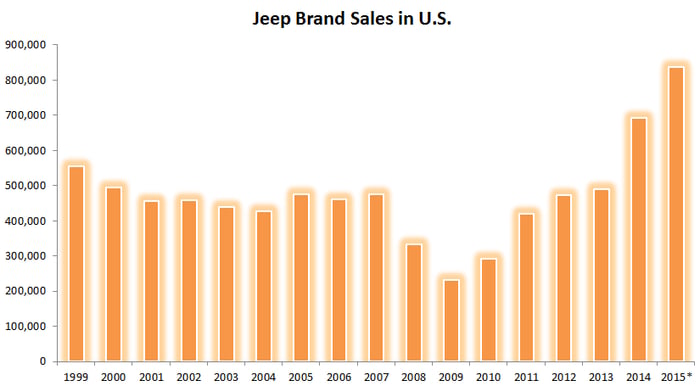 Beyond the incremental sales the Bronco would generate for Ford, why is now a good time to finally consider bringing the Bronco back? After all, Ford showed off a concept Bronco in 2004 and never followed through.

Ford has already announced it would move production of the next-generation Focus and C-Max from the Michigan Assembly plant beginning in 2018. With cheaper production costs in Mexico, Ford might move those less-profitable products to factories there and begin production of higher-margin products, such as the Ranger and Bronco, at the Michigan Assembly plant, said "a person familiar with the matter," according to Bloomberg. Doing so would make a lot of business sense.

Furthermore, it's very possible the Bronco would be a midsize SUV, according to Bloomberg's source -- which is the most popular SUV segment. That's important because if true, it would enable the Bronco and Ranger to be built on the same style platform at the same assembly plant. Add that to the fact that Ford applied for a trademark application for the Bronco name in February, and it's a big picture that fits together all too well.

However, Ford has yet to publicly announce any real plans for launching another Bronco SUV. In fact, in response to queries about the trademark application, a Ford spokesman has reportedly said: "Companies renew trademark filings to maintain ownership and control of the mark, even if it is not currently used. Ford values the iconic Bronco name and history." And as recently as December, Ford's official statement on the vehicle was: "While Ford values the iconic Bronco name and history, there are no current plans for a new Bronco."

Ultimately, however, it would make a lot of sense for Ford to bring back the Ranger and Bronco together within a couple of years, and I personally wouldn't be surprised to hear an official decision during this year's Union Auto Workers' negotiations with Ford. It's a move investors should definitely cheer, especially if the Bronco can steal some of the SUV pie Jeep has enjoyed recently.