Occidental Petroleum (NYSE:OXY) is a rather unique oil company. In a lot of ways it's similar to the larger integrated oil companies like Royal Dutch Shell (NYSE:RDS.A)(NYSE:RDS.B) or BP (NYSE:BP) as it not only produces oil and gas but also has midstream and downstream assets like pipelines and petrochemical plants. However, it's a lot smaller than those big oil giants and it is growing much faster, which are similar characteristics to an independent oil company like Anadarko Petroleum (NYSE:APC). Unfortunately, because it is more of a hybrid, investors tend to overlook Occidental when instead it offers them the best of both worlds.

In a lot of ways Occidental Petroleum is an ideal long-term core energy holding for investors. As the company points out on the slide below, it combines the positive elements from both sides of the energy spectrum. 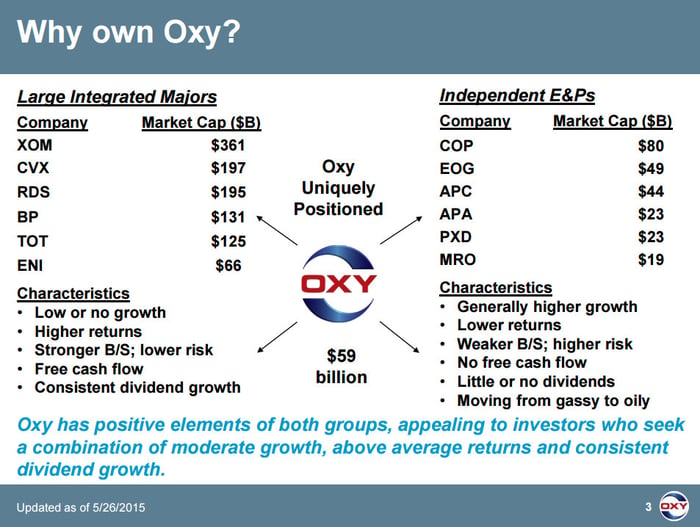 One of the reasons why its credit rating is so strong is because it generates strong cash flow. This is where its integrated model comes into play as its OxyChem business generates a lot of free cash flow for the company while its midstream business helps the company maximize the price it receives for its oil and gas, which really helps to keep its margins up in a downturn. Much like BP and Royal Dutch Shell, Occidental's cash flow during a downturn holds up a bit better because its downstream and midstream assets provide a natural hedge helping it to offset some of the oil price decline.

One other area of strength for the company is the fact that it is a leader in producing oil via enhanced oil recovery, or EOR, which generates gobs and gobs of cash flow for the company. In fact, it can break even on its EOR production at a price as low as $22 per barrel.

Because of its much more stable cash flow, Occidental Petroleum estimates that at a $60 oil price it can fund its dividend and growth capital expenditure without having to borrow any money. This is a much different path from a lot of independents that haven't been shy in using debt to fund growth.

Lots of growth
Speaking of growth, Occidental Petroleum believes that it can still grow its oil and gas production by 5%-8% per year over the long term in a low oil price environment. That's a much higher rate than the low single digit growth rates of companies like BP or Royal Dutch Shell. Instead, its growth is more in line with a company like Anadarko, which has grown its production by 8% per year over the past five years after adjusting for asset sales. Having said that, Anadarko has eliminated much of its short-cycle growth spending in light of the downturn, which will lead to roughly flat production in the near term.

That's not the case at Occidental, which has a lot of short-term growth potential due to its strong position in the Permian Basin. The company has grown its production out of the basin by a 20% compound annual rate over the past few years and sees that upward growth trajectory continuing despite lower oil prices as the slide below shows. 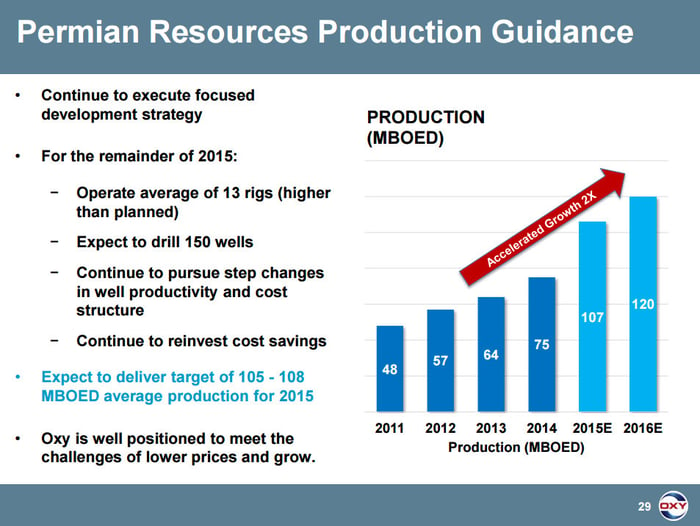 One of the reasons why it's continuing to grow at a healthy clip despite the downturn is because of its rapidly falling costs. As the slide above notes, it is seeing step changes in well productivity and costs, which is enabling it to drill more wells with less money so that it can still grow in the current environment.

Investor takeaway
There's a lot to like at Occidental Petroleum. Not only does it have all the safety features an investor would want as it has a strong balance sheet, generates strong cash flow, and pays a very solid dividend just like its integrated peers BP and Royal Dutch Shell, but it also offers the faster growth rate of an independent like Anadarko Petroleum. So, for investors looking for the best of both worlds, Occidental Petroleum is worth a closer look.